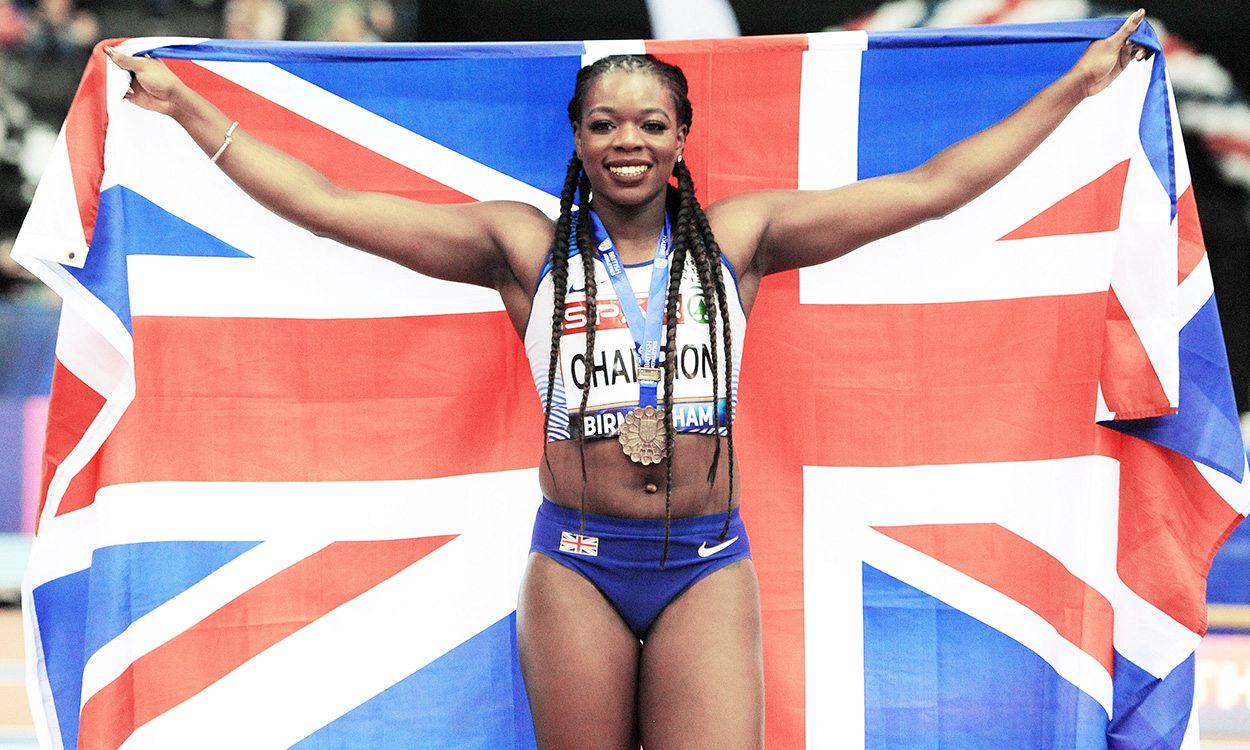 Describing her time on the Arena Birmingham track as “the perfect rehearsal”, European indoor champion Philip equalled her season’s best with 7.12 to retain her title and head into the global event at the same venue on March 1-4 full of confidence.

Behind her, Daryll Neita ran 7.26 for silver and Bianca Williams 7.28 for bronze.

“You can’t be complacent at these championships. It was about doing the job and qualifying,” said Philip, who holds the British record with her 7.06 from Belgrade last March.

“I felt like I had a great winter and the indoor season has started well so I just had to execute the race and confirm my place on the team for the World Indoor Championships. It was the perfect preparation to compete on the same track as the championships.”

On her World Indoors goal, she added: “I will only accept a medal. This is my time – I’ve finished fourth or fifth or gone out in the semi-finals but I’m not doing that this time.”

It was also a case of job well done for Ujah as he regained the title he claimed in 2015 to secure his spot on the GB team alongside Philip.

Clocking 6.56, he beat Andrew Robertson with 6.62 and Sam Gordon with 6.67, while former world indoor champion Richard Kilty – who has been making a comeback after serious injury – won his semi-final in 6.68 but did not race the final as an Achilles problem flared up and another contender, Ojie Edoburun, was disqualified for a false start in his heat.

“The main thing was to come here and secure my spot on the team,” said Ujah. “I did what I needed to do.

“I needed a run-out on this track. I cannot wait to be competing at the World Indoors, it will be a very special event.”

Like Philip, Andrew Pozzi also claimed European indoor gold last winter and will be looking to gain a global gong to go with it, now his place on the GB team for the World Indoor Championships is secured. 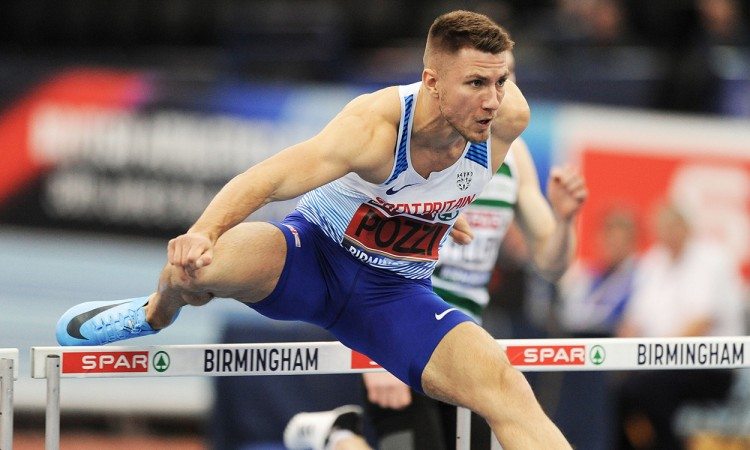 Despite being left in the blocks, the 25-year-old surged through the field to clock 7.58 and win his fifth national 60m hurdles title ahead of David King with a 7.63 PB and Khai Riley-La Borde with 7.78.

“I’m elated to qualify for the World Indoor Championships,” said Pozzi, whose winning time matches the mark he recorded in his only other race so far this year, in Berlin in January. “There is a lot of work to do before I get there but this was a very big race to win – and I’m delighted. The guys pushed me all the way so it sure made for an entertaining race.”

The day after retaining his BUCS title, Jake Porter finished fourth in a 7.84 PB.

In the women’s race, Megan Marrs further improved her Northern Ireland record to win, just missing the World Indoors standard with 8.16. Visibly shocked by her victory, the 20-year-old pipped Yasmin Miller with 8.20 and Marilyn Nwawulor, who went into the competition fresh from a PB of 8.13 from last weekend in Belgium and clocked 8.23 in Birmingham.

“I can’t put it into words,” said the winner. “I came here last year and didn’t make the final and knew that I had a lot of work to do, but I’ve come back this year having put in the work and it’s actually paid off now.”

Laura Muir claimed another impressive victory, completing a sweep of national indoor 800m, 1500m and 3000m titles by winning the longer event in 8:46.71 to ensure she can contest the distance again in Birmingham in just under two weeks’ time.

With a final kilometre of 2:42.93 and last 600m timed at 1:32.3, Muir further proved her fine form to claim a dominant victory and lead a Scottish one-two as she was followed over the finish line by Eilish McColgan with 8:50.87 on the clock.

Steeplechaser Rosie Clarke was third in 8:52.49 with Melissa Courtney, who had led for much of the race, fourth.

“I’m really pleased,” said British 1500m record-holder Muir. “The win was sort of the important thing and I had to test my speed over the last few laps but I’m really pleased with how I executed the race and happy with the win.”

After running an indoor PB of 8:41.94 in Boston, Steph Twell missed the chance to build on that in Birmingham through illness. 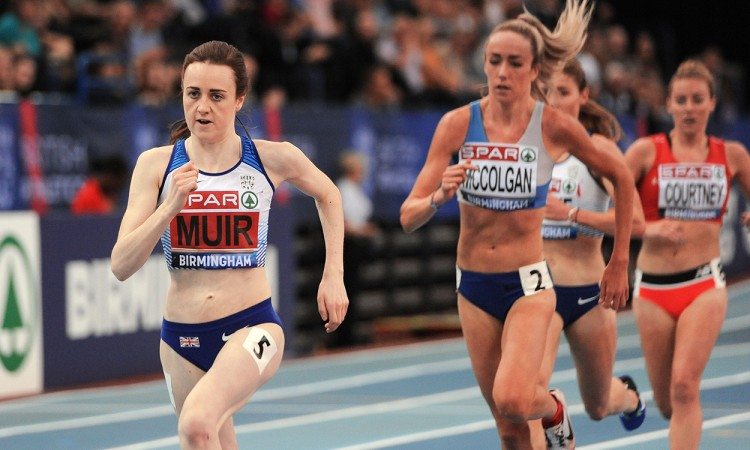 There was an exciting finish in the men’s 1500m, which was run as a straight final, as Jake Wightman pulled away from Charlie Da’Vall Grice to take the title – 3:43.83 to 3:44.57. With the World Indoors standard already secured thanks to his 3:37.43 from Boston a week before, the winner booked his place on the GB team.

“Worlds was never definitely in my plans, it was just if I got the standard then I’d look to go,” said Wightman. “I did that last week and there would have always been disappointment not to make the team from the position I was in but I’m glad today went as it did and it leaves me relaxed.”

Wightman’s fellow Scot Chris O’Hare had been due to race but was forced to sit it out following a “minor foot issue”.

“I think without Chris there I knew that it’d be a little bit more relaxed because I knew that I’d be the one who was in control of them,” added Wightman. “When I went I tried to lose sight of them as quickly as possible and it paid off.”

Over in the men’s shot put final, Scott Lincoln secured success with a best of 18.40m to beat Scott Rider with 17.64m and Youcef Zatat with 17.30m.

“I’ve got to be happy with winning the British Championships,” said Lincoln. “Distance-wise I’m not quite there yet but my coach and I are putting some really good work together. Confidence is oozing back and I just want to enjoy the season.”

Contesting the championship and throwing the 7.26kg shot at this event for the first time, rather than the 6kg implement in the F42 category, Paralympic and world shot put champion Aled Davies achieved his aim of a top-eight spot with a 15.42m PB for sixth.

He had earlier told AW how he hoped the competition would “bring out something special” and his performance proves the hard work he is putting in towards his longer-term aim of representing Wales in able-bodied competition at a future Commonwealth Games is paying off.

“It is the first time I’ve been invited to throw the able-bodied-weight shot put at the British Championships so it was an amazing opportunity,” said Davies. “My main aim is still to throw 20-plus metres with the para 6kg weight in Tokyo 2020 but this is very different and gives me a chance to chase people down. It’s keeping me hungry and properly enjoying my sport.”

» Further SPAR British Athletics Indoor Championships coverage can be found here, while the February 22 edition of AW magazine will include in-depth reports, pictures and results