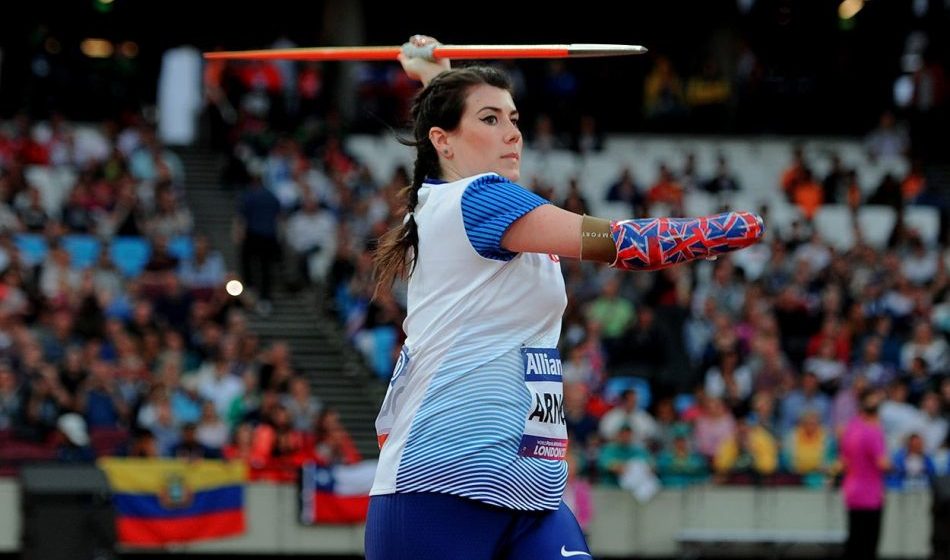 Team captain Hollie Arnold won the F46 javelin title with a world record throw on a golden evening for British athletes at the World Para Athletics Championships in London.

The Rio 2016 Paralympic champion opened with a championship record 41.38m which she improved to 42.13m in the second round. She came close to that with her third round 41.90m but with the crowd giving her fantastic support and rhythmic clapping, the Briton unleashed a 43.02m to improve her world record.

She came close to her record with a 42.89m fifth round.

Despite her fantastic series, it wasn’t a clear victory as New Zealand’s Holly Robinson threw an Oceanian record 41.83m in the fourth round and then she came even closer with a 42.41m final throw to go within 61 centimetres of Arnold’s lead and world record.

“It means everything to me,” said the Briton, who had finished fifth at the London 2012 Games. “I finally did it – triple world champion. I came here and it was a tough competition and did it for everyone here.

“That was a fantastic series for me. I went out there to smash it and I did. It was great to get the world record. I knew that fourth throw was close but I wasn’t sure if I’d got it. The support of the crowd was absolutely amazing. I’m really delighted.”

Behind her, Lindy Ave of Germany was second in 27.02, just edging past Britain’s Kadeena Cox in the final 20 metres.

Hahn said: “It feels absolutely incredible and to break a world record in front of a home crowd is phenomenal.

“It was fantastic to have my team-mate Kadeena Cox getting the bronze and to have two British athletes on the podium is great.”

Sammi Kinghorn won the British women’s team’s third gold of the night in the T53 200m.

She built up a good lead with a strong start and bend and held her advantage along the straight to improve her world record to 28.61.

Australia’s Angela Ballard was second in 29.09.

Kinghorn said: “Gold. I can’t believe it. That crowd was incredible!”

Ukraine’s Natalia Kobzar won the T37 200m in a championships best 27.62, while American Deja Young clearly won the T47 200m in 25.10. Young had been in a car accident earlier in the year and was pleased to be near full fitness.

USA won the day’s final track event, the T54 200m. One of the sport’s greatest ever athletes, Tatyana McFadden, actually led a clean sweep as she won her 12th world gold in a championship record 28.08.

Algerian Nassima Saifi won the F57 discus with a 34.05m throw while Maroua Ibrahami won the F32 shot with a throw of 5.86m.