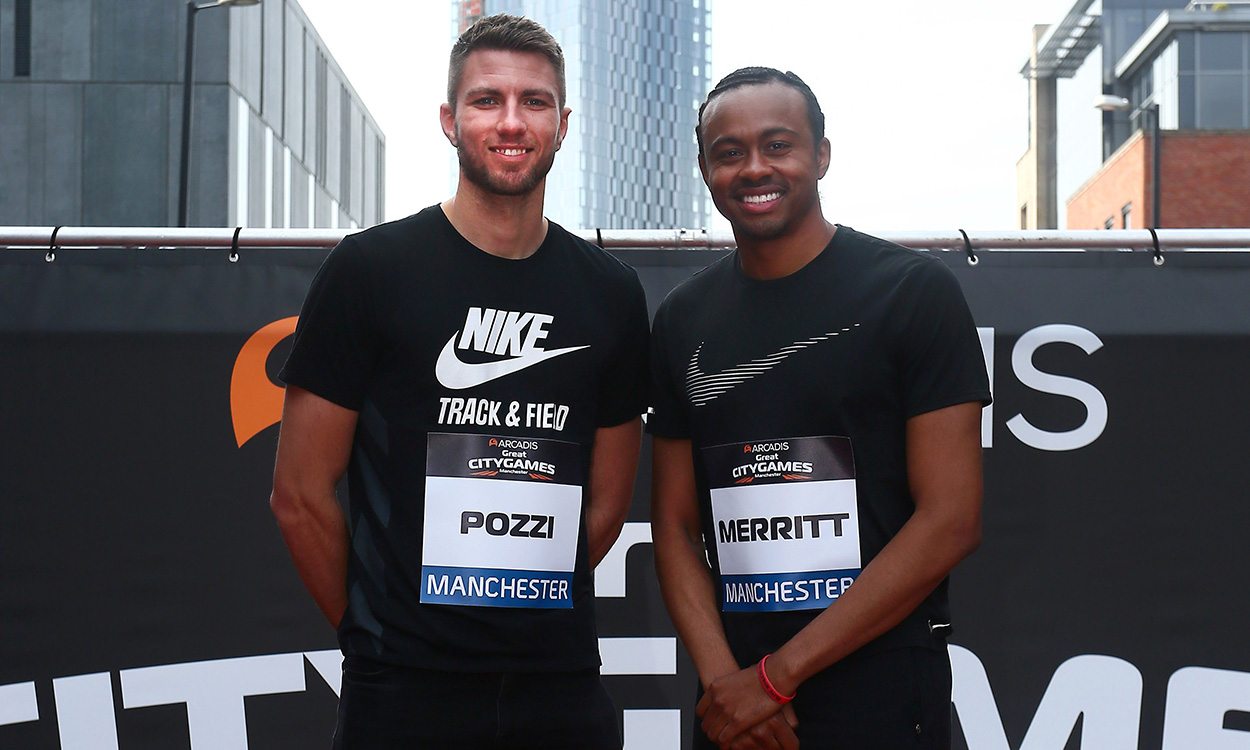 The pair will race over the 110m hurdles on Friday evening at the Arcadis Great CityGames Manchester, the popular street athletics event which is celebrating its 10th anniversary.

Pozzi has never experienced the atmosphere and spectacle provided by the Deansgate track, his well-documented struggles with injury over the past few years having prevented him from doing so.

However, this time he has made it to the start line and will compete as the world and European indoor champion. The 26-year-old is now looking to replicate that 60m success when it comes to racing 110m outdoors – a subject he speaks about in an interview featured in the current issue of AW – and, despite the disappointment of missing out on a medal at the Commonwealth Games earlier this year, is looking ahead to this indoor season with confidence.

Merritt, a good friend of the Briton, insists Pozzi has every right to have high hopes.

“He’s world indoor champion and that’s a very good confidence booster going into the outdoor season,” says the American, who finished fourth in the 60m hurdles final which Pozzi won so memorably in a snowy Birmingham this year.

“He should be able to capitalise on that. He’s a phenomenal athlete, with a lot of potential and I’m expecting big things from him in the future.”

Merritt has lofty ambitions of his own, of course. The fact he is still competing at the top level following a kidney transplant back in 2015, the year in which he last competed in Manchester, speaks volumes.

“It feels good to be back,” he adds. “Hopefully everything goes smoothly.

“This is one of those meets where you have a good time, you mingle with the fans, they get to see you up close, but I would like to come out and run a season’s best for sure.”

Pozzi adds: “This will be my first street race. It’s going to be completely new for me but everyone raves about it – the atmosphere and the experience – so I can’t wait.

“I had a short break after competing at the Gold Coast but I’ve been back in training now for about three weeks and we’ve had a really great block.”

Pozzi and Merritt will be joined on the start line in Manchester by British 23-year-old David King and Polish hurdler Damian Czykier.

Three-time world champion Bershawn Jackson will be the one to beat in the 200m hurdles with Irish hurdler Thomas Barr expected to be in contention.

Barr, meanwhile, is the Irish record-holder and finished fourth at the Rio Olympics in 2016. The pair will be up against Britain’s Jacob Paul and Frenchman Victor Coroller.

Two home athletes who have already tasted success in 2018 are Commonwealth 4x100m champions Richard Kilty and Harry Aikines-Aryeetey, who will be joined in an all-British 100m battle by British 60m indoor champion Andrew Robertson and Samuel Osewa.

The men’s T13 150m will get the track action off and running and is headed by Ireland’s nine-time Paralympic and world champion Jason Smyth. He is joined by Britain’s Zak Skinner, as well as Spanish duo Diego Sancho and Eduardo Uceda.

In the pole vault competition over in Albert Square, England’s Gold Coast bronze medallist Luke Cutts will be up against Commonwealth fourth placer and British indoor champion Adam Hague, as well as the likes of Frenchman Stanley Joseph.

» Further information, including a timetable, can be found at greatcitygames.org/manchester and the event will be shown live on BBC Two from 6pm

» Click here for a preview of the women’s events