Americas lead the way from Europe in Continental divide 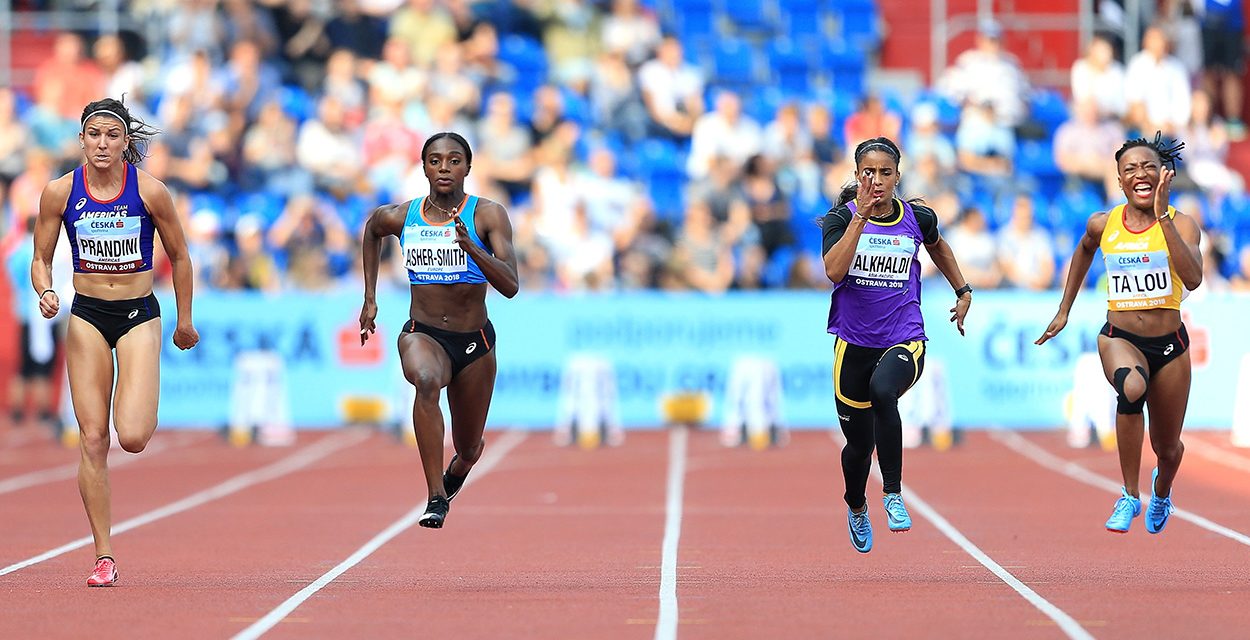 Second places for Dina Asher-Smith and GB’s relay team with high-quality athletics in the Czech Republic including a fast 400m hurdles, 3000m and quality pole vault

The Americas team got the better of an interesting first day of the Continental Cup in Ostrava, which most observers thought was not enhanced by the ‘innovative’ ideas by the IAAF.

At the halfway stage they lead by 12 points from Europe, with Asia Pacific third and Africa fourth.

The 3000m was the women’s track highlight of the day and certainly did not need the devil-take-the-hindmost element to it.

There was one sprint for the first elimination spot four laps out but thereafter the last runner was tailed off by some way.

Many dislike the principle where athletes who could be on for PBs were not allowed to finish and the last person to finish in fourth, Konstanze Klosterhalfen, ran a quick 8:38.04, which is surely the fastest last place time in history!

Europe did even better in a quality pole vault which saw three athletes clear 4.85m.

The win went on countback to Russian Anzhelika Sidorova. She and European team-mate Katerina Stefanidi and Sandi Morris of the Americas all cleared the winning height at the second attempt and although the Russian was the only one to fail at 4.80m, she had less failures at the lower heights.

The best men’s individual performance of the first day came from Abderrahman Samba of Asia-Pacific as he dominated the 400m hurdles in 47.37.

Over a second back was Annsert Whyte of the Americas in 48.46 as Europe’s Karsten Warholm was a tired third in 48.56.

The Americas lost a few points to Europe in the field but still had their moments. Darlan Romani shocked world champion Tom Walsh with a 21.89m second round throw while Fedrick Dacres was a clear winner in the discus with a 67.97m throw. It was not clear-cut though as he only just remained in the circle as he lost his balance.

The points in the throws system confused a few in the crowd. Effectively in the first three rounds you are competing against your team-mate as only the leading athlete in each continent gets another throw.

The best two in the fourth round get a final throw and, as Andrius Gudzius had a no throw there, it meant he finished behind Matt Denny, who threw 61.84m, who had a best of 63.99m while Gudzius threw 66.95m.

Denny also beat the European No.2 Daniel Stahl even though Stahl threw 64.84m in the same round as Denny’s best and did not get the chance to contest the fourth round – and Stahl finished fifth!

The women’s discus result also looks confusing. Sandra Perkovic had the best throw – a 68.44m – and won the top prize money but as she had a no-throw in the final round the first place points went to Yaime Perez of the Americas team who threw 65.30m.

Americas had got off to a good start in the opening track events and led most of the afternoon.

World record-holder Kendra Harrison off to a great start in the hurdles but was run down by Americas team-mate Danielle Williams. The 2015 world champion won in a near PB 12.49 from Harrison’s 12.52 while Europe were a distant third and fourth led by Pamela Dutkiewicz’s 12.82.

The 200m was the first men’s event and there again the Americas won as Alonso Edward proved the strongest with a 20.19 win over European champion Ramil Guliyev’s 20.28.

Europe did better in the next track event, the women’s 100m. British record-holder Dina Asher-Smith held off US’s Jenna Prandini but finished a close second as she lost out to her evenly-matched rival Marie-Josee Ta Lou’s 11.14. The Briton ran 11.16 with Prandini’s 11.21 pipping Dafne Schippers in fourth.

Later in the day, Asher-Smith anchored the all-British European team in the 4x100m and again was second. The team ran 42.55 to the Americas’ 42.11.

Ta Lou did not get the baton on the last leg for the disqualified African team.

Europe struggled badly in the women’s 1500m with a sixth and seventh and could obviously have done with Laura Muir, who was instead competing in Stockton-on-Tees.

The last lap was fast, though, with home athlete Simona Vrzalova enlivening it with an early kick but the last 300m was all Winny Chebet of Africa as she produced a 42.5 last 300m to hold off Shelby Houlihan of the Americas to win in 4:16.01.

The women’s 400m went the way of Asia Pacific as world silver medallist Salwa Eid Naser won easily in 49.32 but Caster Semenya set an impressive South African record of 49.62 in second. Justyna Swiety-Ersetic was another European champion to struggle and only finished sixth in 51.64.

In the hammer there was a shock loss for world and European champion Anita Wlodarczyk. DeAnna Price of the Americas had the three best throws headed by a fifth and final throw of 75.46m to the Pole’s 73.45m.

One multiple global champion in better form was Caterine Ibarguen as she won the triple jump easily with a 14.76m leap.

The devil-takes-the-hindmost in the steeplechase was confused slightly by Soufiane El Bakkali turning his ankle badly in the first sprint and an injured Evan Jager not starting, meaning it was a lap later than normal.

Conseslus Kipruto – this time running with two shoes – won easily and started celebrating with 200m to go with still a water jump and barrier to go.

Another African winner was Emmanuel Korir, who narrowly won a tactical 800m in 1:46.50. It was close for second with Clayton Murphy as he finished in front of Nijel Amos by three thousandths of a second.

Another African winner was Ruswahl Samaai, who won the long jump with a 8.16m/0.2 leap.

The Africans fared less well in the relays in which they failed to finish either race and the men’s event saw an easy win for the Americas team in 38.06 – well clear of the all-Turkish European team.

» Full coverage in the September 13 issue of AW