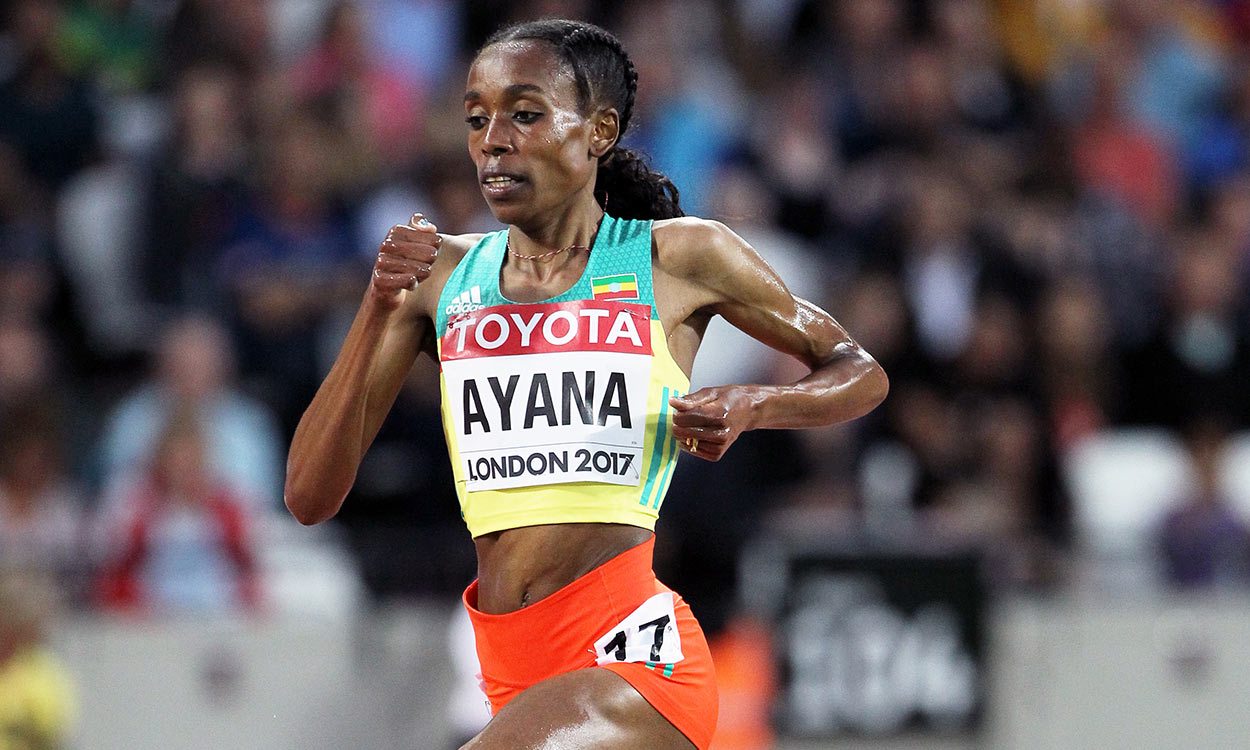 World record-holder storms to victory in London, winning by an astonishing 46 seconds ahead of Tirunesh Dibaba

Olympic champion Almaz Ayana added the world 10,000m crown to her 5000m title from Beijing with probably the most dominant women’s track performance in history.

Even though she had not raced a step in 2017, the world record-holder destroyed the field in London, winning by an astonishing 46 seconds, the biggest ever women’s world distance track margin.

Despite the dawdle at the start, her time was a superb world-leading 30:16.32.

The reason for this was a quite remarkable second half of 14:24.94, which is quicker than her own world championships record set in Beijing two years ago and her last 7km was well inside world record pace.

The race, with the biggest ever field (33) to grace a 10,000m final, started slow and the first kilometre was 3:30.03 led by Sitora Khamidova which is outside 35-minute pace.

It was in the fourth kilometre that Ayana surged to the front with a 68.63 lap which only Yasemin Can tried to follow.

Through 4km in 13:02.20, she passed halfway in 15:51.38 with a six-second lead over Can and then a further two second gap to the other medal contenders containing Kenyans and Ethiopians.

“I am very happy to win this title, much more than when I won the Olympic gold because I have been sick this year and did not expect it,” she said. “In fact, this was my first race of 2017.”

The battle for second was predictably won by three-time world champion Tirunush Dibaba, who herself was running her first track race of the year.

Alice Aprot was fourth and the top European was Susan Krumins of the Netherlands in fifth as Can faded to eleventh.

The crowd gave Ayana a huge roar over the closing laps appreciating her dominance. However, it was a pity that there was little atmosphere for the first half, while former world boxing champion David Haye was interviewed mid race.

The atmosphere might have been better if one or ideally all three Britons had been introduced before the race and most of the crowd probably didn’t realise the race had a UK presence.

Jess Martin did not finish. She was 16:21.02 at 5000m but stepped of the track with six laps remaining and later said she would be retiring from the sport.

Earlier in the evening, Jo Pavey had been among those to receive medals in the London Stadium as she gained a reallocated bronze from the Osaka 2007 World Championships 10,000m. Kara Goucher received silver.