Allyson Felix ready to mix it up in Manchester 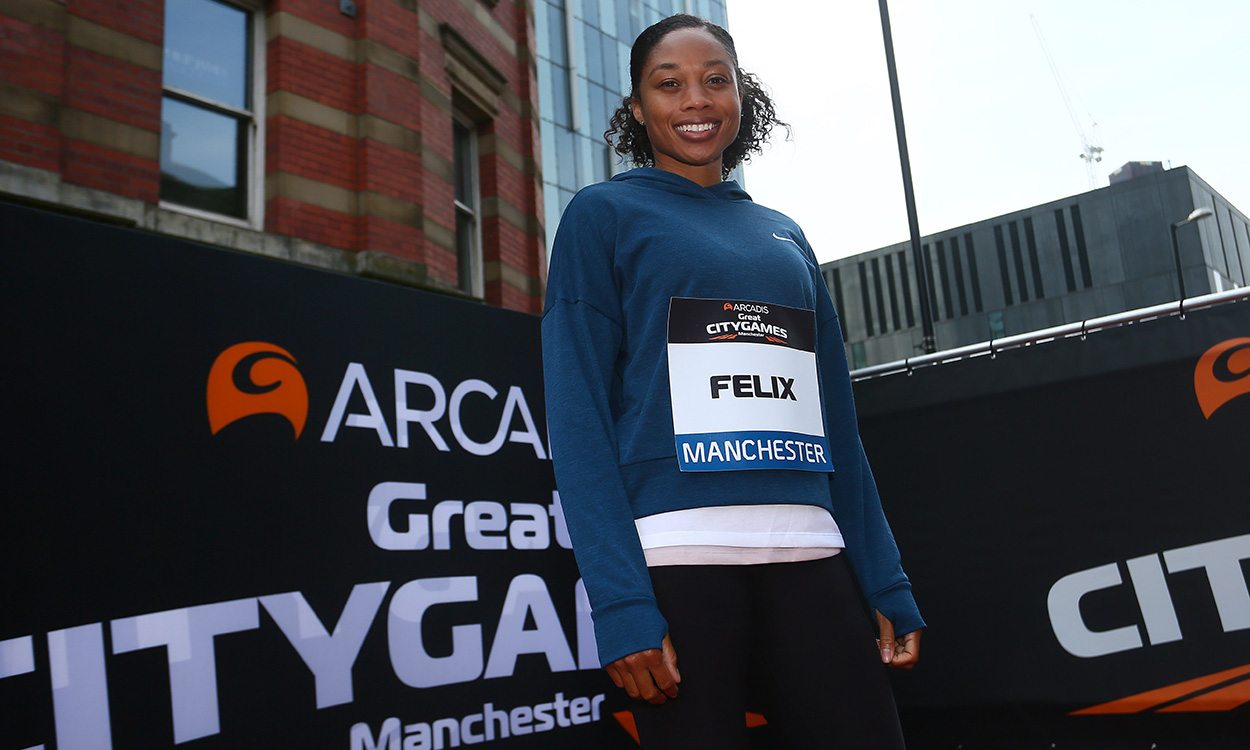 Allyson Felix loves variety, to changes things up. The fact that the American has excelled over 100m, 200m and 400m is, she says, a key reason for her having been able to enjoy such an illustrious career.

Given that the highly-decorated 32-year-old loves to challenge herself in as many ways as possible – and that she is keen to have a little fun in a year which doesn’t involve a major championships for her – meant the rare opportunity to race over 150m on the pop-up track at the Arcadis Great CityGames in Manchester was one she could not resist.

“I’m really excited about it,” says Felix of the popular street event, taking place on Friday evening. “In a year like this (with no major championships) I think these are the moments that are really fun. It’s also great to bring track and field to a different atmosphere and expose people who might not come to a stadium to it.

“I hope lots of people and families come out, plus it’s always really cool to run something like a 150m. I think that’s awesome.

“I run that distance a lot in training but not straight!”

Felix has done it before, however, and done it rather well. In the current issue of AW, we delve into the 150m exploits of Usain Bolt from 2009 and why, from gun to tape, his 14.35 proved to be the fastest race in history.

Felix has held the record for the fastest 150m in Manchester ever since she clocked 16.36 in 2013 – a then world best time. She also set the 200m CityGames record in Manchester back in 2011, recording a then-world leading time for a no-bend 200m race.

She will face tough opposition this time in Marie-Josée Ta Lou, the Ivorian who won silver over 100m and 200m at last year’s world championships in London.

“You don’t quite know where you are without the bend and all of that. It’s a very different thing and it’s also not so intense and serious. Sometimes that’s good and track should be that way. I think we put so much pressure on every race that sometimes it’s nice to just have a lighter feel to things.”

She adds: “After 15 years, a year like this is crucial just to give my body a little bit of a break from the intensity. Just trying to be smarter with my training and my racing as well. I’ll get some good, quality races in but I’ll also be selective with what I’m doing with my time and energy.”

There’s little chance of her becoming stale, however.

“It (running varied events) has definitely allowed my body not to take such a beating but it has also been good for my own interest as well,” she says. “I couldn’t imagine 15 years of just 400s – I don’t think I would have made it – so I think it’s always nice to switch it up. I truly love all the distances and to get to challenge myself in different ways has, I feel, definitely helped to prolong my career.”

Felix will be one of the headline acts in a busy CityGames programme.

Racing over the more traditional 100m will be an all-British quartet of Sophie Hahn, Georgie Hermitage, Katrina Hart and Bethany Tucker in the T37/38 race.

Over in the pop-up arena at the nearby Albert Square, Britain’s Jazmin Sawyers will be a focal point in the long jump competition which also features France’s 2014 world indoor champion Éloyse Lesueur.

» Further information, including a timetable, can be found at greatcitygames.org/manchester and the event will be shown live on BBC Two from 6pm

» Click here for a preview of the men’s events