Aled Davies and Maria Lyle get gold in Dubai 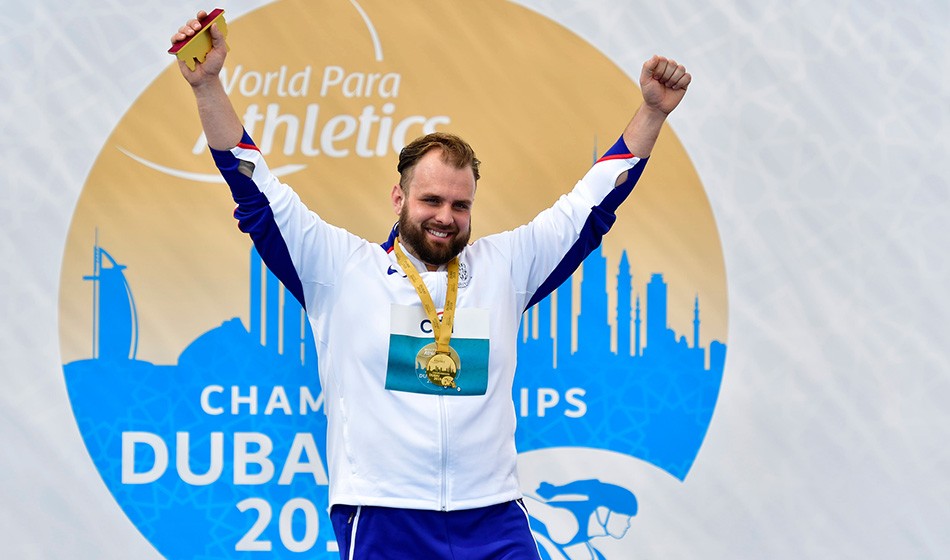 Throwing 15.38m in round four, Davies won the F63 event for his seventh world gold medal overall, adding to three won in the discus, beating Luxembourg’s Tom Habscheid with 15.10m.

“Fourth time – it’s very special,” said Davies, competing at a major event for the first time as a father and speaking with his seven-week old daughter Phoebe in his arms.

“I think back to my first world champs in New Zealand in 2011 and I got fourth place at the age of 18, and now here we are, almost 10 years later and we’re still on top of the world taking world records and winning gold medals.

“I’ve been dreaming too hard and too long to roll over and hand over titles. I had to fight for this one, I really did. I dug deep and luckily I hung on by the skin of my teeth.”

On fatherhood, he added: “It’s the only motivation you need. I don’t do this for me now – I’ve achieved everything I’ve wanted to achieve. Golds at every tournament and world records, so if I can keep on dominating as long as possible and show that beautiful little girl how it is done then that’s great.”

“I’m feeling happy, it’s been a long time coming,” said Lyle, who has already secured six world medals at the age of just 19.

“It’s my third world champs so it’s very special to finally get that title.

“I got a good reaction, but I stumbled close to the start so at the end or most of the race I was trying to recover from that.

“To do that time considering the conditions, it fills me with confidence so I’m looking forward to the 200m now,” added the Paralympic medallist, who also told AW about growing up in the sport and her mental health (video interview below).

“It’s very special (her world title). It’s something I’ve never had before so to do it here when we’ve had the team achieving so much is special and it’s really important to me.”

After her T35 100m world title win, @Lyle_Maria spoke with @stuartweir about her victory, growing up in the sport, her mental health and more #Dubai2019 @BritAthletics @ParaAthletics pic.twitter.com/oWliqTvbGK

Racing with her married name on her bib, South Africa’s Anrune Weyers claimed T47 400m gold in a championship record of 55.79 and later spoke about her win and the support she has received.

“Last year was really tough because of injuries,” said Weyers, who won her first world title in 2015 in Doha under her maiden name of Liebenberg. “It has been a miracle to run here, because I just had six weeks of training (after surgery) so this has been amazing. I’m really thankful to be injury free and run.”

Racing with her married name on her bib, Anrune Weyers (Liebenberg) claimed T47 400m gold and later spoke with @stuartweir about her win and the support she has received #Dubai2019 pic.twitter.com/S5mdxvW1tr

On his return to the British team for the first time since 2014, Ola Abidogun secured his place in Tuesday’s T47 100m semi-finals after running 11.12 in his heat.