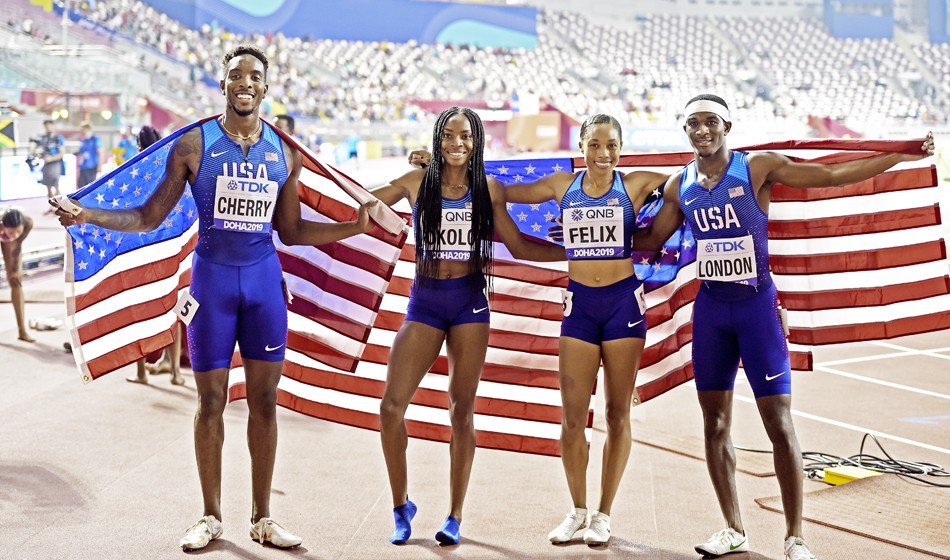 Predictably with a stronger quartet, the USA smashed their world mixed 4x400m record from the heats by over three seconds in the very first major championships to hold the event.

Their time at the IAAF World Championships in Doha was 3:09.34 and they won by over two seconds. For the second time in a day, Britain bettered the old world record but finished fourth!

Wilbert London gave them a good start and Allyson Felix, chasing a record 12th world championships gold and 17th medal, briefly went ahead before predictably Poland (running a different gender mix to the other seven teams) went flying past in the shape of Rafal Omelko.

On the third leg, Iga Baumgart-Witan maintained a lead of around four seconds over USA’s Courtney Okolo.

On the last leg all the pressure was on European champion Justyna Swiety-Ersetic, who had a good lead but was being chased by seven men.

Javon Francis of Jamaica got the verdict in 3:11.78 just ahead of Abbas Abbas of Bahrain’s 3:11.82. Chasing hard but unable to close on the leading two, though just easing past the Pole, was Martyn Rooney who gave Briton fourth.

Rabah Yousif had got them off to a good start and there were very good low 50-second legs for both Zoey Clark and Emily Diamond.

Rooney finished less than half a second from the medal and lost around that amount of time with a hesitant final change as he took the baton. The British team resisted the temptation to strengthen their team unlike the USA and surely the inclusion of Matthew Hudson-Smith would have yielded a medal.

Rooney said: “It’s my eighth world championships, I’ve served my time, I’m very proud to represent my country, and I’ll serve it any way I need to – if that means stepping out and letting someone else run and that’s what’s best for the country then I’ll do that.

“I think the team here stepped up to the plate and they ran a European record twice and I think – especially the girls – they outshone us and that’s where we knew the difference would be in the women’s pair, rather than the men’s. They were fantastic.”

In qualifying there was good news for Britain’s 200m runners but less for the 800m runners.

All three Brits impressively eased through to tomorrow’s 200m semi-finals.

Adam Gemili ran the most relaxed and controlled fast 200m he has ever run. His 20.06 heat one win was his fastest for three years and he beat world and European champion Ramil Guliyev (20.27) by two metres. It proved to be the quickest of the seven heats for the 100m semi-finalist.

“This was a bit of redemption for yesterday – for not executing how I should have done,” Gemili said. “Hopefully this gives me a good lane for tomorrow.

“I’m happy with that – I didn’t feel like I was pushing too much off the bend, I was just high stepping. I had a little glance and saw Guliyev was there or thereabouts and I feel like I’ve got plenty in the legs for tomorrow.”

Less than 24 hours after his 100m final, Zharnel Hughes also qualified easily with an eased-back 20.24 second place behind China’s Zhenye Xie’s 20.20. The 100m champion Christian Coleman did not start.

“Tonight was all about qualifying,” said Hughes. “I didn’t really care that much about going super fast. I was held up by anti-doping last night and did not get to sleep until 4am.”

Alex Quinonez of Ecuador won heat three with an impressive finish in 20.08 ahead of Yohan Blake (20.23).

Kyle Greaaux won heat four easily in 20.19 as 19.82 performer Kenny Bednarek was clearly injured and jogged across the line in 21.50.

Miguel Francis kept the good UK results going and would have won if he had not eased back in the last few metres and was caught on the dip by Aaron Brown as both were timed at 20.11.

The 100m bronze medallist Andre De Grasse won heat six, easing back in 20.20, while the big favourite Noah Lyles eased back significantly in heat seven that Jereem Richards (20.23) pipped him and the American ran 20.26.

All three Britons were eliminated in the 800m.

Ferguson Rotich got the other automatic spot with a 1;44.20.

It was his fourth fastest time but the quickest he has ever run outside of London.

Euopean indoor silver medalist Jamie Webb faded in the last 200m and was eighth in 1:48.44.

In the final heat the pace was even slower and the runners threw away any chance of a fastest loser spot.

Defending champion Pierre Ambroise-Bosse was in a qualifying position on the bend but faded in the last 100m and was also baulked and finished seventh in 1:47.60 having taken 14.9 for his last 100m.

Ahead of him and also running into traffic was 2017 fourth-placer Kyle Langford and he was a respectable fifth in 1:46.41.

The final looks open with no Amos, Korir, Adam Kszczot and indeed not one finalist from London 2017 but there will be three Americans.