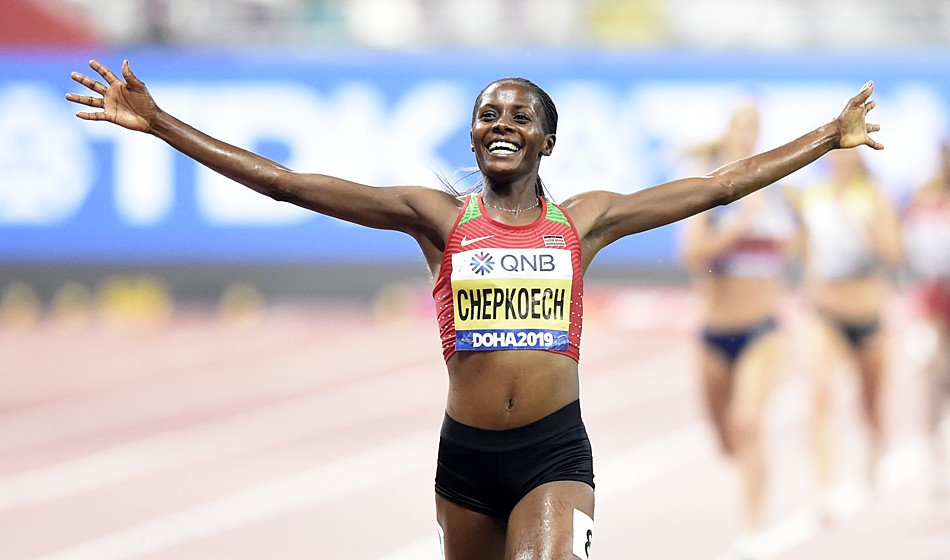 Two years ago, Beatrice Chepkoech lost direction during the London world 3000m steeplechase final and had to run back for the water jump. She also fell heavily but still finished fourth.

This time in Doha, the world record-holder made no mistake, blasting into an early lead which she then held all the way to the finish.

At this stage she had five seconds on the chasing pack which became six seconds with four to go and nine a lap later.

Not surprisingly, she could not hold the world record tempo but it was still something special as she went through 2000m in 5:55.28 with a similar margin and her lead was 10 seconds with 800m to go.

On the penultimate lap, defending champion Emma Coburn began to pick up the pace herself to stretch the chasing pack and at last the gap began to close. The Kenyan hit the bell in 7:47.21, just under seven seconds clear.

With Coburn closing and full of running, but not enough to ever look like she could defend the title, she herself looked a safe second until at the last water jump European champion Gesa Krause took it much better than Winfrid Yavi and menacingly closed on Coburn.

However, nothing changed in the finishing straight.

Chepkoech strode to victory in 8:57.84, a championship record and a time that only her and former world record-holder Ruth Jebet have ever bettered.

Coburn finished superbly and her 9:02.35 was a PB by just 0.23 of a second, her previous PB being the old championship record.

Further back there was an impressive Danish record for St Mary’s-based Anna Moller (9:13.46) in seventh and an Albanian one for Luiza Gega of 9:19.93 in ninth.

Adam Gemili was a very impressive winner of the first semi-final of the men’s 200m, though he was the only one of the three highly-rated Brits who will run in tomorrow’s final. 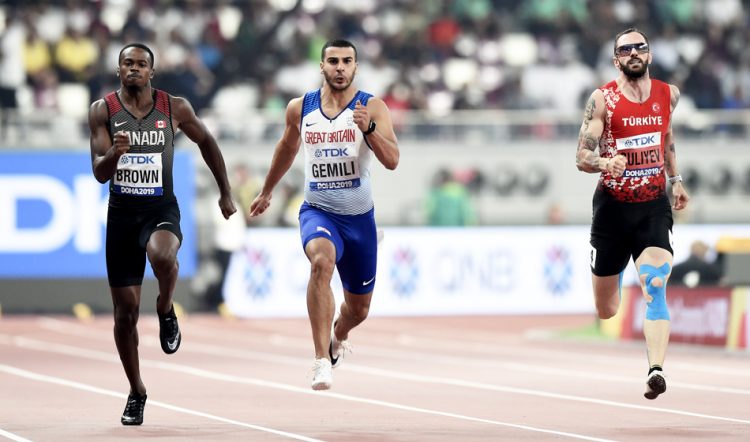 The Blackheath and Bromley athlete probably ran his greatest ever bend and entered the straight well over a metre clear. He did slightly tighten in the last 30 metres but his 20.03 was the fourth best of his career.

Defending champion Ramil Guliyev, covered in strapping, was a well beaten second in 20.16.

“I feel good. I feel confident,” said Gemili. “I just wanted to go out there and put in a bit more effort than yesterday. I am still not firing 100 per cent but I am getting there. I wanted to win that semi and get a good lane for the final. I’ve been saying it for years, once you get in the final anything can happen. For me, I am going to run to the best of my ability.”

The second semi was faster as world leader Noah Lyles won in style in 19.86, pursued hard by Ecuadorian Pan American champion Alex Quinonez who showed he is also a genuine medal threat with second in 19.95.

Zhenye Xie ensured a fastest losers spot with 20.03 as Miguel Francis, so impressive in the heats, withdrew from the race with a quadricep injury sustained in the first round.

The fastest man in the field, Yohan Blake, faded even more dramatically and the 19.26 performer ran 20.37 in sixth.

Just 18 hours after becoming the 100m silver medallist, Dina Asher-Smith was back in action and looked mightily impressive and was fastest.

She looked in full control in heat four and despite looking in second gear, strode to a 22.32 victory, two metres up on Dezerea Bryant’s 22.56.

Anthonique Strachan had won a weakened heat one in 22.86 after defending champion Dafne Schippers and 100m bronze medallist Marie-Josee Ta Lou both withdrew.

The second heat was closer and faster and saw a win for Ivet Lalova-Collio in 22.79 just ahead of Jodie Williams on 22.80 and Mujinga Kambundji’s 22.81.

American women sprinters disappointed in the 100m but Brittany Brown won the third heat in a PB 22.33 from an eased back Olympic champion Elaine Thompson, who ran 22.61.

The fifth heat saw a very fast finish from Niger’s Aminatou Seyni, who went from fifth to first in the last 40 metres and won in a national record 22.58 just ahead of Tatjana Pinto’s 22.63.

Blessing Okagbare, so impressive in defeating Thompson and Asher-Smith in the Diamond League in Stanford in 22.05, slowed near the end and was only fourth across the line and outside automatic qualification but she was disqualified for a lane infringement.

Anglerne Annelus won the sixth heat by four metres in 22.56, four metres ahead of Carolle Zahi’s 22.99. Beth Dobbin did not look at her very best at this stage and was third in 23.14, the 23rd fastest of the 24 qualifiers.

In the women’s 400m heats, both Britons qualified.

Defending champion Phyllis Francis was an easy winner of heat one in 50.77.

After her mixed relay duties, Emily Diamond was fifth in a season’s best 51.66 which qualified her by time as 51.85 got the slowest of the six fastest losers spots.

It looked as if it was three out of three for the USA as Shakima Wimbley won comfortably in 51.17 but she was later disqualified for a brief collision with the line. She was reinstated on appeal as second place went to Iga Baumgart-Witan, who had run the previous day’s relay.

For most of the race, Laviai Nielsen looked in full control but she tied up near the end and seemed to stumble in her last few strides and she finished second in 51.52.

Olympic champion Shaunae Miller-Uibo won heat five at a canter in 51.30, and though only ninth fastest, looked like she could go quite a few seconds quicker.

The sixth heat saw two others who had already run in the mixed relay heats and final to the fore and 2017 London runner-up Salwa Eid Naser won easily in 50.74 from Justyna Swiety-Ersetic’s 51.34.

In the 110m hurdles, world and Olympic champion Omar McLeod won heat one in 13.17 while former champion Sergey Shubenkov won heat two in 13.27.

World ranked No.2 Daniel Roberts seemingly won heat three in style but he was later disqualified as not only did he destroy his own hurdle, his leg went into the next lane and brought the hurdle of Ruan de Vries’ down before he got there leaving the South African to hurdle the air. Pascal Martinot-Lagarde won the heat in the American’s absence in 13.45 with world indoor champion Andrew Pozzi, still not looking at his sharpest, second in 13.53 and only 18th fastest in the round.

Roberts’ collegiate rival and top-ranked Grant Holloway impressed in heat five winning easily in 13.22 though the quickest was Orlando Ortega who won heat six in 13.15. 13.60 proved sufficient to qualify by time.