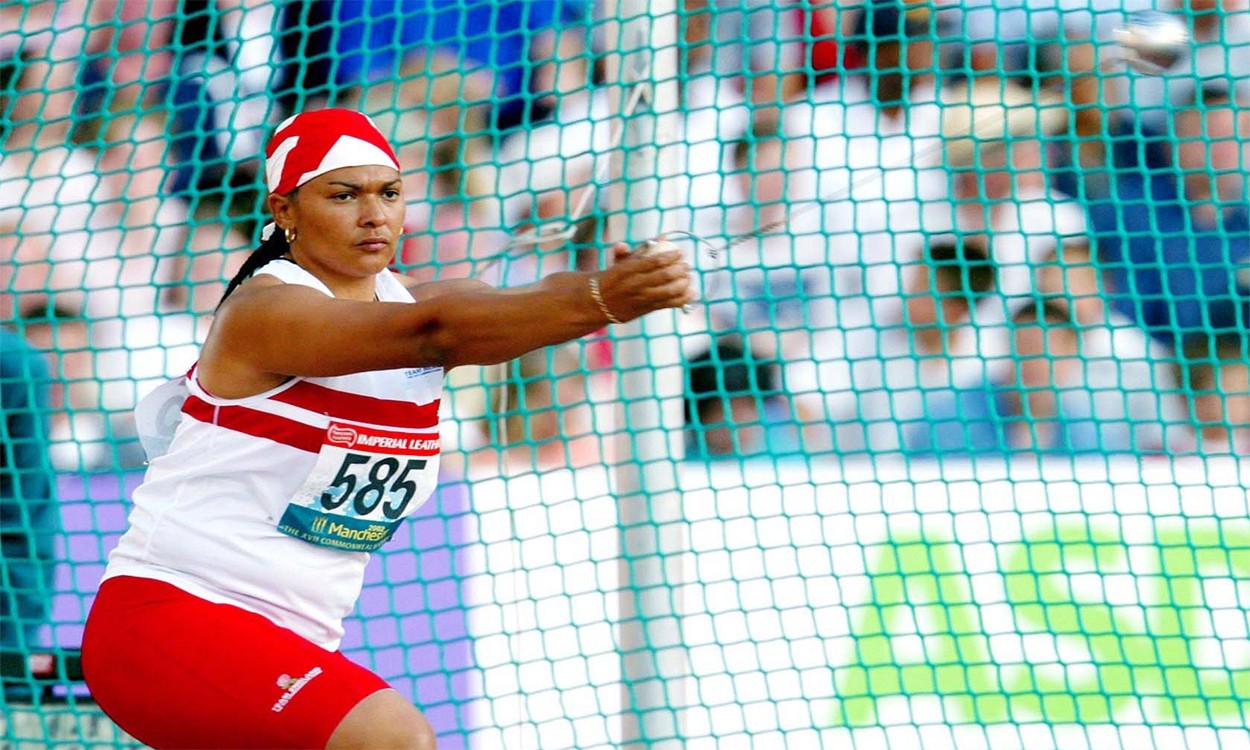 A look back at the women’s pole vault, triple jump and hammer at the Commonwealth Games

All three of the new events were introduced to the Commonwealth Games in Kuala Lumpur in 1998.

The world indoor triple jump record holder at the time, Ashia Hansen, returned from injury and won with her only measured jump of 14.32m. Cameroon’s Francoise Mbango was second and the African went on to win the 2004 and 2008 Olympic titles.
Connie Henry won a second English medal, just a centimetre behind Mbango and her own PB, which still sits at fourth on the UK
all-time list.

Home success came in the triple jump too when Hansen retained her title after being pushed all the way by Mbango. The latter took the lead with an African record 14.82m in the final round but Hansen recorded 14.86, her best jump for three years, with the last jump of the competition. Trecia Smith of Jamaica, who would go on to win the 2005 world title, was third.

The pole vault title eluded England as the gold medal again went to an Australian, Russianborn Tatiana Grigorieva, who stood above compatriot Kym Howe on the rostrum. They also took a onethird share of the bronze as their Bridgid Isworth, England’s Irie Hill and Canada’s Stephanie McCann could not be separated. England’s No.1 Whitlock failed a drugs test and missed the Games.

More Australian medals followed in Melbourne four years later. The first two from Manchester reversed medals as a championship best of 4.62m was set. The triple jump saw a lower standard than in Manchester as Smith won easily with Nadia Williams excelling to win a bronze for England. In the hammer, Shaw ensured a full set of medals by taking bronze with a good 66.00m throw. Australia regained the title through Brooke Billett’s Games record of 67.90m.

Australia were without a medal in this event in Delhi in 2010 as Sultan Frizell won easily for Canada with another record of 68.57m.
Wales’ Carys Parry excelled to take the silver medal with Zoe Derham also enjoying her biggest success to date to take an English
bronze. Smith retained her triple jump crown in India with a modest 14.19m, with Williams the leading Briton in sixth. In the pole vault, Alana Boyd ensured Australia had never lost a Commonwealth title but she only won on countback from the surprise package from Cyprus, Marianna Zachariadi. Kate Dennison gained a threeway share of bronze to become England’s joint most successful vaulter.

Most successful athlete and Briton: Ashia Hansen and Trecia Smith have each won two triple jump titles but Smith also has a bronze. No athletes have won two pole vault golds and Britain has won two bronzes. In the hammer, Briton Lorraine Shaw has won a medal of each colour.