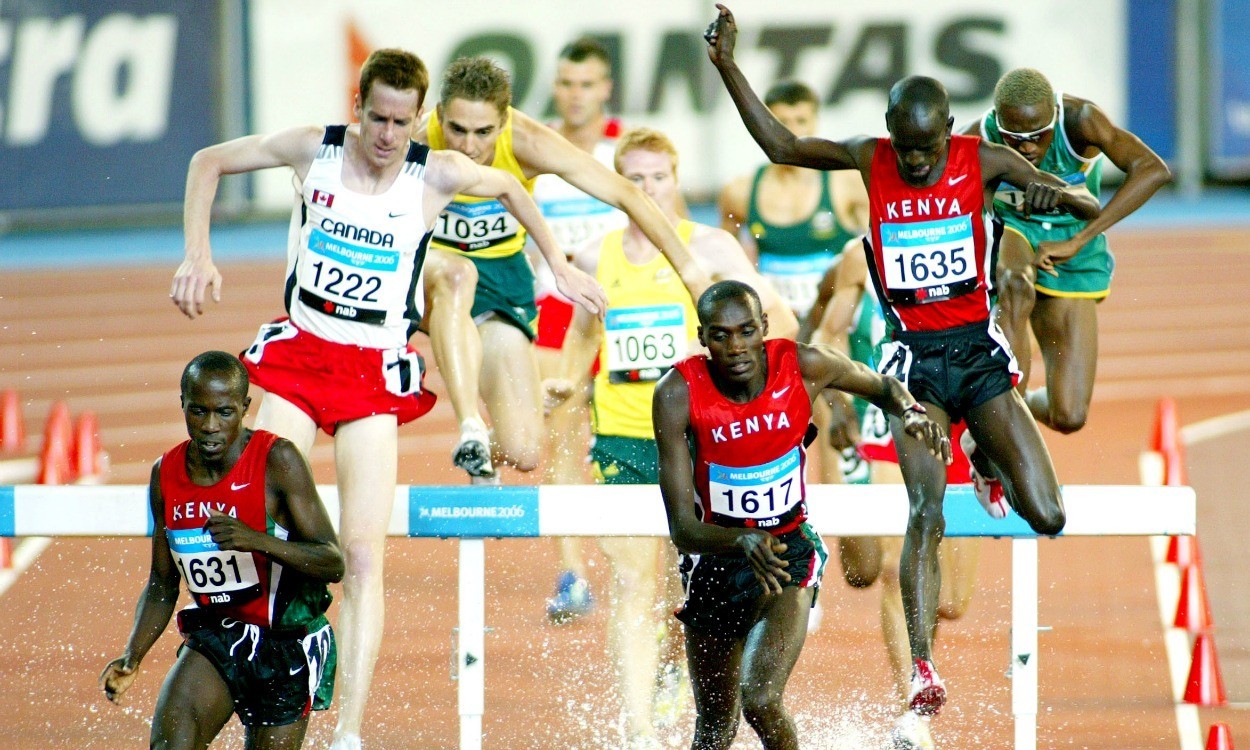 The men’s steeplechase is the focus as we look back on the Commonwealth Games, event-by-event

The first Commonwealth Games chase, over eight laps and around 100 yards short of two miles, was won by Buxton quarryman George Bailey. There is no record of the distance he won by, or the other times.

Bailey was third in 1934 when the distance was exactly two miles. Stan Scarsbrook led an English clean sweep in winning by about two seconds from Tom Evenson.

Strangely, while the steeplechase was held in all other major events, it wasn’t at the Commonwealth Games for another 28 years. When it returned in 1962, in Perth, Trevor Vincent won in very hot conditions as the home nation took three of the first four places. The 1966 race was won by New Zealand’s Peter Welsh, who ran the second fastest ever time to set a 12-second PB in defeating world record holder-to-be Kerry O’Brien. Third was Ben Kogo, gaining Kenya’s first championship medal in an event they would totally dominate.

O’Brien was a big favourite in 1970 but fell, although Australia nevertheless took gold in a fast 8:26.2 through Tony Manning. Olympic 1500m finalist Ben Jipcho took second while Olympic champion Amos Biwott was third.

Jipcho won easily in 1974 in 8:20.67, a time only he had ever beaten. A superb second was Wales’ John Davies who ran a sprightly British record of 8:24.8 despite falling on the last lap.

Kenya swept the medals in 1978. World record-holder Henry Rono won comfortably, matching Jipcho’s double but was slower than he was in the heat, which he won by an extravagant 24 seconds.

Julius Korir kept the title in Kenyan hands in 1982, as Graeme Fell had England’s best result for 28 years with a silver.

Fell returned in a boycott-affected 1986 Games and won gold, but this time in a Canadian vest. Wales’ Roger Hackney and England’s Colin Reitz took the other medals.

Fell completed his medal collection in 1994 – uniquely he placed in each of the first four positions – as he gained his revenge on Walker to take third. He also became the last athlete to beat a Kenyan in a Commonwealth steeplechase as Paul Chemase finished eighth. Ahead Johnstone Kipkoech and Gideon Chirchir, ranked just eighth and ninth in Kenya that year, became the first Commonwealth competitors to break 8:20 with the winner running 8:14.72 to win by half a second.

It happened again in 2002 in a great race which saw the Kenyans separated by less than half a second. Stephen Cherono, later to be a Qatari and world record-holder Saif Saaeed Shaheen, edged the gold medal. England’s Stuart Stokes finished fourth and he was fifth in 2006 as three different Kenyans shared the medals. Ezekiel Kemboi took gold by a second from Wesley Kiprotich Koech. Stokes achieved his third top-five in three Games but was out of the medals in what was probably the top race of the Games as Kenya yet again monopolised the podium. This time it was the turn of world and Olympic medallist Richard Mateelong, who beat double world and Olympic champion Ezekiel Kemboi and former world and Olympic champion Brimin Kipruto.