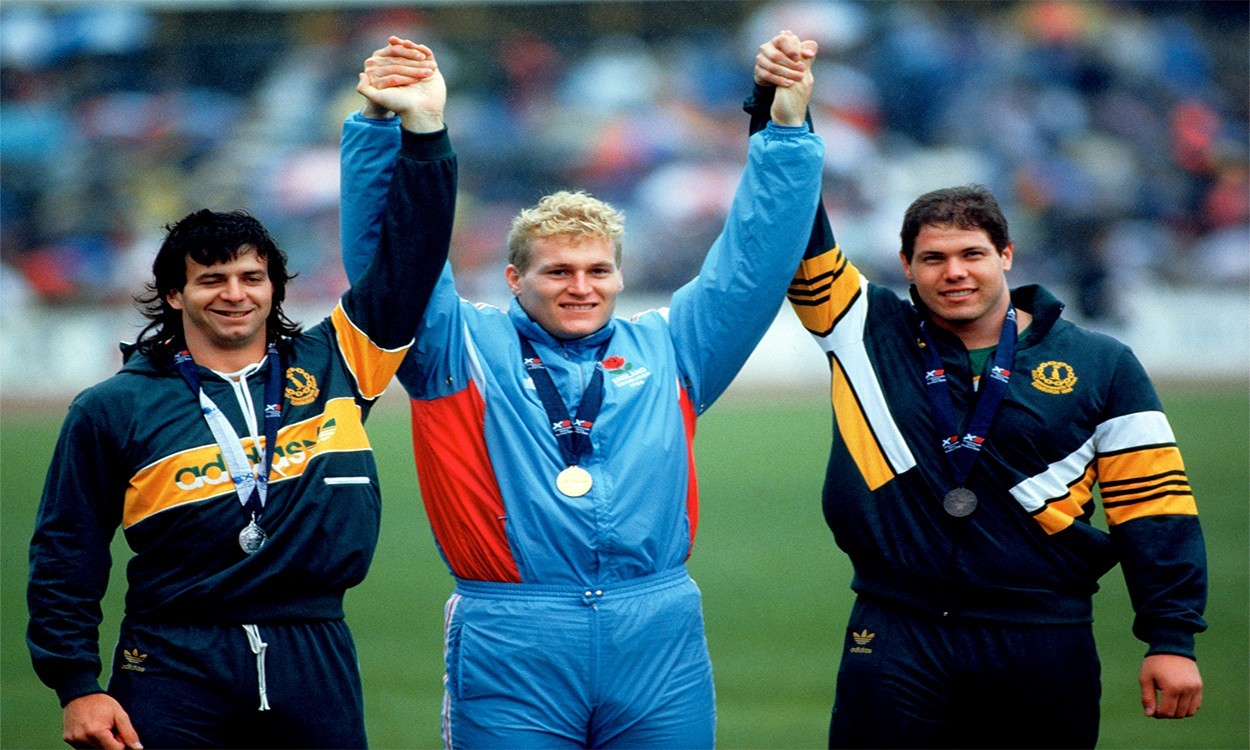 The inaugural shot contest in Hamilton in 1930 was a modest affair and easily won by Harry Hart, who also won the discus, was third in the javelin and also competed in the hammer. England’s Robert Howland was runner-up, well over a metre behind, and it was the same one-two and supremacy in London in 1934, as Hart improved the Games record to 14.67m.

The 1938 contest saw a similar scenario as a South African (Louis Fouche) won easily and no one else was over 14 metres, but this time there were no British competitors. Post-war there was no immediate improvement in standards and, in Auckland in 1950, a new country was top of the podium after Fiji’s Mataika Tuicakau won easily. Again, the silver medallist, Harold Moody, was in the 13-metre range. John Savidge, who was easily the Commonwealth’s top thrower in 1950 but hadn’t made the trip to New Zealand, went to Vancouver and won easily. Adding a massive two metres to the record, he won with 16.77m. While only the winners had previously bettered 14 metres, in Canada the first six did, even though second was almost two metres down on the 6ft6in-tall
Englishman.

Standards continued to advance in 1958 in Cardiff and, from a previous best of one over 15 metres, this time there were eight! The first two were a different class, though, and Arthur Rowe won with a Commonwealth record 17.57m, which put him in the world top five that year. Team-mate Martyn Lucking was still much better than the rest with 16.49m. Lucking had improved dramatically by Perth in 1962 and he went over 18 metres to win by just three centimetres from Scot Mike Lindsay. Canadian Dave Steen was within 20 centimetres of the winner in third.

In 1966 in Kingston, Steen improved to 18.79m to win comfortably from the discus champion, Les Mills of New Zealand. The British medal domination ended with Lindsay in fourth. Steen won again in Edinburgh in 1970 and achieved the first 19-metre throw in the Commonwealths with 19.21m. England’s Jeff Teale edged Mills for silver as a 20-year-old Geoff Capes was fourth.

Four years later in Christchurch, Capes had improved by almost four metres and won with a British and Commonwealth record 20.74m with team-mate Mike Winch also breaking the old Games record with 19.36m. Capes didn’t throw as far in 1978 in Edmonton but won by just under half a metre from Bruno Pauletto. The Italian-born Canadian improved in Brisbane in 1982 to win comfortably from Winch, who won his second silver.

In Victoria in 1994, England made it three in a row and their eighth title in 11 Games. Matt Simson won a quality contest with a PB 19.49m as 23cm covered the medallists. In Kuala Lumpur in 1998, the best Englishman was only tenth as South African Burger Lambrechts took the distances back over 20 metres for just the second time. While England failed, Wales picked up a bronze through Shaun Pickering’s 19.33m.

There were 21m throwers in Manchester in 2002, but they were well beaten by Justin Anlezark’s Oceania and Games record
20.91m. Carl Myerscough picked up a bronze for England. Silver medallist Janus Roberts went one better in Melbourne in
2006, winning by a centimetre from Jamaica’s Dorian Scott. Scott was again second in Delhi in 2010 but a long way back on Canadian Dylan Armstrong’s world-class Games record of 21.02m with Myerscough fourth.