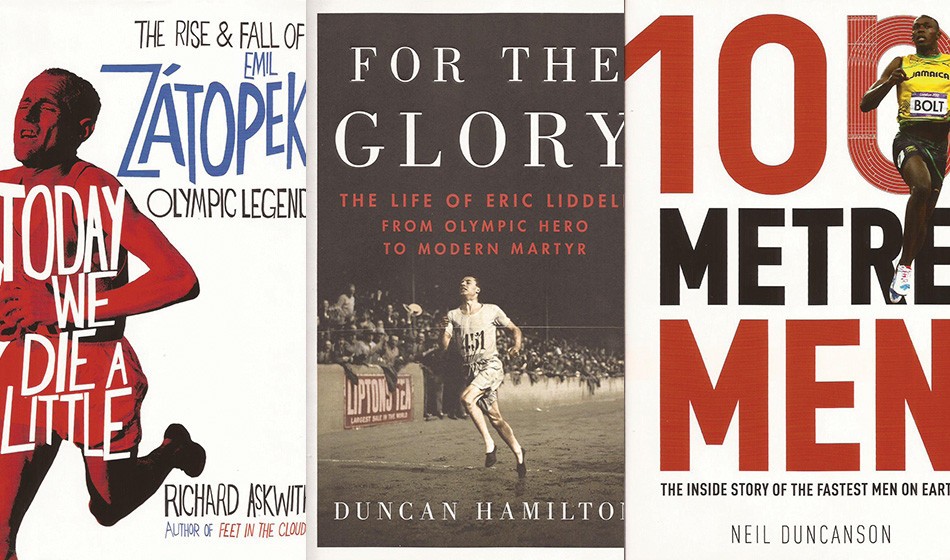 The AW contributor shares some of his favourite athletics books

I recently counted the athletics book on my shelves and was surprised to find about 50. Some were published as far back as the 1940s, others in the past year or two. For this article I have selected some of my favourites – a tall order indeed.

Eric Liddell, who won gold in the 1924 Olympics after switching from the 100m to the 400m because his Christian conscience did not allow him to run the shorter event on a Sunday, is the most written about athlete. I have 10 books on the shelves about him.

The best and most recent is For the Glory: The Life of Eric Liddell by Duncan Hamilton (Doubleday, 2016. ISBN: 9780857522597) which covers his athletics well but also the latter part of his life in a Japanese prison camp. The 1924 Olympic 100m title was won by Harold Abrahams, whose story is told in Running with Fire: The True Story of Chariots of Fire Hero Harold Abrahams by Mark Ryan.

Emil Zátopek was arguably the greatest distance runner of all time. Remarkably two books were published about him in 2016.

For me the better one was Today We Die a Little: The Rise and Fall of Emil Zátopek, Olympic Legend by Richard Askwith (Yellow Jersey, 2016. ISBN: 9780224100342). The book presents Zátopek as much more than just the greatest distance runner ever. It gets inside the man who achieved everything “with a grace and generosity of spirit that transcended sport”.

The men’s 100m is often seen as a highlight of the athletics programme. In 100 Metre Men by Neil Duncanson (André Deutsch/Carlton, 2016. IBSN : 9780233005027) the author writes about every winner of the Olympic race from 1904 onwards. It is gripping reading. The range is fascinating. “These fast men are an extraordinary blend of success and disaster, as well as glory and tragedy; ranging from amazing wealth to grinding poverty, superstar adulation and national hero status to bankruptcy, shame, prison, even suicide.”

My shelves have three Usain Bolt books but the one I like best is The Bolt Supremacy: Inside Jamaica’s Sprint Factory by Richard Moore (Yellow Jersey, 2015. ISBN 9780224092302). Moore sets out to investigate how Jamaica has managed to dominate sprinting in recent years and finds some interesting answers.

Modern British athletes Mo Farah, Jo Pavey, Jess Ennis-Hill and Greg Rutherford have all published autobiographies. As I have to choose one, I will go for Rutherford’s – Unexpected (London Simon and Schuster, 2016. ISBN: 9781471162527).

Rutherford starts the book with a clear statement: “I hate sports autobiographies. Most bore me to death. So before I started writing this, I had a clear condition in my mind: I had to be brutally honest. I didn’t want this to be a conventional, sugar-coated, bland tale of a developing sportsman.” The book is certainly not PC and bland.

For further assessment of a number of the athletics books I have read, see veritesport.org