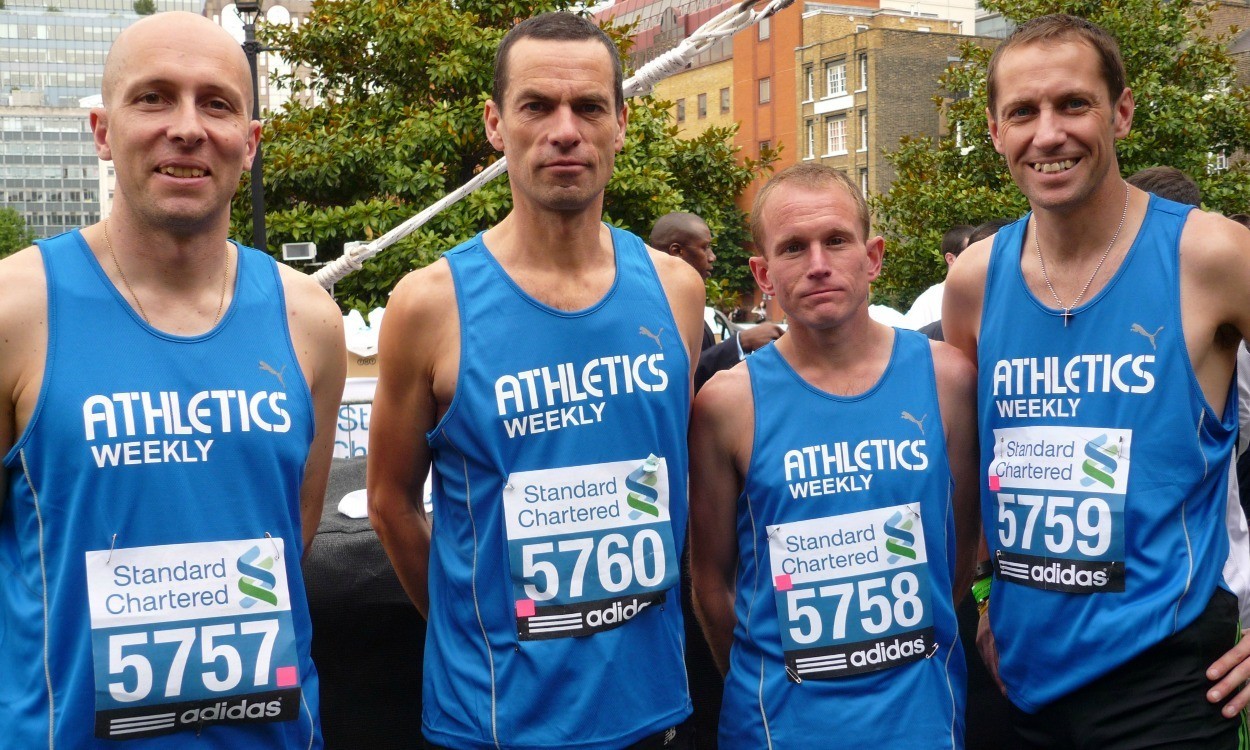 AW‘s results editor has the amazing experience of having finished every London Marathon bar one, with a PB of 2:29:42. Here he shares his top training tips

In terms of preparation, for me the key point is consistency. A solid background of training miles, long weekend runs of around 20 miles, plenty of shorter races for speed and trying to stay healthy, with a eye to get sufficient rest but also getting any injuries treated as soon as possible.

A week before the race you can’t get any fitter and while I like to run every day, the distances are greatly reduced and the effort sessions are confined to short sharp efforts with an aim to get speed into my legs but not take too much out of myself. My final track session are usually controlled 200m efforts. I run just a few miles on Friday and Saturday on race weekend but many like a complete day off.

Just as important as the running in the last week is to get plenty of rest, eat sensibly (upping the carbs) and make sure you are well hydrated. While all runners have to attend the Marathon Expo to pick up their number, try and stay off your feet as much as possible there and elsewhere and don’t spend ages talking to everyone you know!

Try and get extra sleep during the week before. It isn’t always easy to sleep well the night before the race due to nerves, often sleeping in a strange place or having to get up earlier than normal to eat a breakfast before the race, so it’s important to have some sleep in hand.

There are lots of toilets at the marathon starts but never enough for 35,000 so try and go as much as you can before getting to the start area. Some people just like to stay in the queue and soon as they visit the toilet to go back to the end of the queue and start again as they’ll be ready to go again by the time they have reached the front again.

During the race you may feel you need to stop during the first five miles to have a loo stop but as long as you don’t overdo the drinking on the run and are topping up, then you may find after about 10 miles that the dehydrating effects on running has eased the pressure on the bladder.

Do note that while it is important not to get dehydrated, it is almost as dangerous to drink too much, so just take on enough fluid to satisfy thirst and keep the mouth wet. If it is hot and sunny though, you will need to take on slightly more liquids, but be sensible.

It is also important to eat enough beforehand to be fuelled but not that much that you feel full, bloated and have stomach pains.

During the race most athletes like to take on gels. It varies per person but between three and five should aid the onset of fatigue slightly but only take them on if you are used to them as they can be unsettling to a delicate stomach and dry throat in the second half.

The most important aspect of how you do on the day is the pacing. Some like to see it as a 20 mile warm-up and 10km race. For example, you get to 20 miles as easy as you can and only get into race mode once you are past 20 miles.

The major failing of most marathoners is that the adrenaline means they feel great early on and run faster than they should. If you do run the first half-marathon a few minutes too fast, there is a good chance the second half could be up anything from five to 30 minutes slower than you hoped.

Most runners will have run half-marathons in their build up, and from that should have a rough target. For example, if you have run slower than 1:30 in your half-marathon, you are not going to break three hours but could target a time between 3:15 and 3:30.

As a rough guide, doubling your half-marathon time and adding 10-15 minutes (20 for those slower than four hours) should give a realistic target.

I have run around 70 marathons and still find those last five miles hard but I have the knowledge if I have done the training, pace it well, stay reasonably hydrated and get some boosts from gel, that I am going to be able to maintain a reasonable pace through those last few miles when it hurts the most.

A bit about Steve (pictured above, second from the left)…

My PB of 2:29 dates back from the very first London Marathon in 1981 and I rather foolishly missed the 1983 edition after suffering an injury in the build up, though I was fit by race day and could have run 2:40 had I not decided to go to another race which I won.

As the 1983 London race was slightly short though, I can lay claim to have run all the London Marathons that have taken place over the proper distance!

Now into the M55 category, I’m not going to get any quicker and after peaking in 1981, I am more proud of my consistency (see below) than my PB.

» Note: A version of this blog was first published on athleticsweekly.com on April 16, 2013