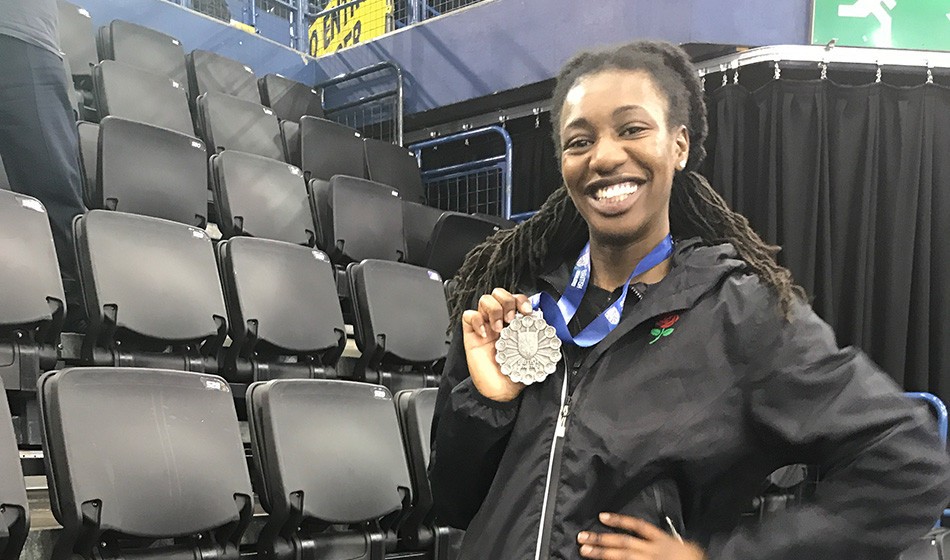 As a coach, the major meetings of the domestic calendar are the ones that matter – that’s for a group who are at a level where podium places at these meets and potential selection for major championships are not too far out of reach. And in reach for one of the group it turned out to be.

Saturday with Jonathan Ilori in the triple jump. The standard for the Glasgow European Indoors was 16.50m and Jonathan had a best from last year of 16.28m. He’d had a couple of outings this year and had managed 15.74m, without really “hitting” the big jump – timing, as in all technical events, comes with competition.

Looking great in warm-up, his first competitive jump resulted in him stuttering on to the board, rushing his phases and not getting the range needed. Still, it was 15.64m and promising given all that. Unfortunately, Jonathan experienced run-up issues – not of the same magnitude throughout the comp – but enough to put him off from obtaining the optimum take-off position (crucial for all the jumps).

However, in the last round he managed to get closer to what was required but still didn’t “connect”. Nevertheless, he went out to 15.97m and went into third place, behind Nathan Douglas (16.27m) and Nathan Fox (16.12m).

Next to jump was Michael Puplampu and Jonathan’s effort must have kick-started his adrenaline as hitting the board perfectly Michael leapt 16.28m to not only surpass Jonathan but move into first place. Both Douglas and Reid had very long no jumps in the 16.50m range and they will both be in Glasgow.

The problem for Michael, despite the win, was that he cannot claim his place for Glasgow as he needs to have jumped 16.50m and did not manage to do so before the selection deadline.

An hour and a half later Alison Wilder was up in the women’s triple jump. Alison suffered some technical issues too but managed a season’s best of 12.32m for seventh overall. The competition was won by Naomi Ogbeta who leapt a stunning 14.05m for a British under-23 record. And Naomi looks like she’s got much more in the tank. It was good to see Laura Samuel getting back to her best in second place.

On Sunday, it was the turn of the long jumpers. Paul Ogun began well opening with 7.27m and was unlucky on a couple of jumps to trail into the landing losing around 15cm with jumps in the twenties. As you’ll know if you have been following my YouTube videos, Paul is changing to a hitch-kick and tweaking his running action.

Competitions are where athletes default to previous settings and this was partly the case with him. Nevertheless, he was running really well and managed to jump 7.37m which was a season’s best and good enough for sixth.

Feron Sayers took the win with 7.72m, and having achieved the 7.95m qualification standard for the Euro Indoors last year, will be heading to Glasgow.

Last on the card for me was the women’s long jump with regular group member Sarah Abrahams and temporary member Jahisha Thomas (pictured) competing (I coached her before she went to the States and am her UK coach).

In many ways, this was the jumps event many were waiting for as it featured Katarina Johnson-Thompson and Jazmin Sawyers. I also had a sneaky feeling that our girls could be among the challengers. And so it turned out.

Sarah managed 6.21m and came in fifth (it was her second longest jump ever). Coaches are never really happy and nor was Sarah as we knew she could have jumped further … that’ll happen on another day. I will say I was happy with Jahisha. She had the Euro qualification distance from a jump in the US in January – bang on with 6.50m (although she had an outdoor mark of 6.69m).

I’ll say coaching this comp was not easy as I had not seen Jahisha jump in a competition for a while and I had to “re-see” and “re-instruct” … also as she is largely American-based, watching what I said was also important.

Different coaches can say the same thing differently. Luckily “we” worked it out and in a tight competition Jahisha jumped 6.36m to finish second behind KJT (6.46m) and just 1cm in front of third placer Abigail Irozuru! There were some of timing issues again, similar to Jonathan, with Jahisha not getting onto the take-off properly and going “up”, rather than out. But second place is second place and she’s on the plane to Glasgow for her first major GB championships.