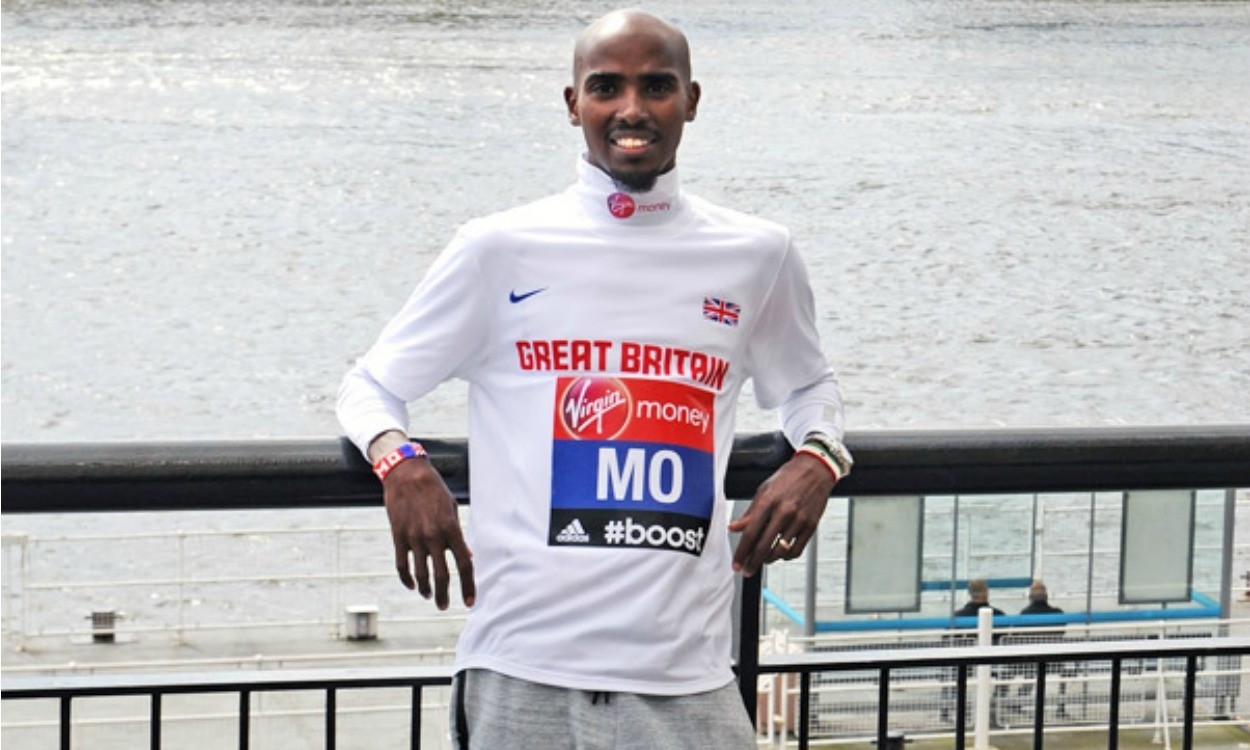 In this big, pre-race preview, AW’s editor explains why Sunday’s London Marathon matters so much to Mo Farah

If you want to know how much the Virgin Money London Marathon means to Mo Farah, a short answer to a simple question last summer spoke volumes. Soon after running 3:28 for 1500m and shortly before winning world 5000m and 10,000m titles in Moscow, I asked him what event or distance most excited him. His eyes lit up and without hesitation he said: “The marathon. The London Marathon.”

Few appreciate just how strong his links are to this famous race. In 1997, as a Hounslow schoolboy, he placed second in the Mini London Marathon before claiming a hat-trick of victories from 1998-2000. At the turn of millennium he moved to St Mary’s University College in south London and his accommodation was effectively paid for by the London Marathon due to its support of the endurance programme there. Then, in recent years, he has trained at altitude camps in Iten and Font Romeu that are part-funded by the London Marathon.

Farah is also fiercely patriotic – a trait that was memorably demonstrated at the London Olympics when a journalist asked whether he would have been prouder to have won gold for Somalia. “Not at all, mate!” he bristled. “This is my country!”

So when the Somalian-born, American-based 31-year-old takes to the roads in his new Great Britain kit at 10am on Sunday, nobody will feel more at home and none of the athletes will want to please the huge crowds as much as the double Olympic and world track champion.

Can he do it, though? From the hubbub of the marathon exhibition at the ExCel centre in the Docklands area to the elite athlete epicentre of the Tower Hotel on the northern side of Tower Bridge, the first question on everyone’s lips is: “How do you think Mo will do?”

Opinion varies, but the consensus is that Farah will do well on his debut if he breaks the British record and might find the more seasoned marathoners from Kenya and Ethiopia too hot to handle. Adding to the intrigue, he plans to settle into a pace that goes through halfway 30 seconds slower than a lead group that will be chaperoned by none other than Haile Gebrselassie.

Jones, the UK record-holder with 2:07:13 from 1985, says: “Mo has all the tools so it wouldn’t be a surprise if he shattered the British record on Sunday or even wins the race. As a runner, I had no fear of the marathon – I had been racing and running 100 miles a week for many years when I moved up to 26 miles – and I don’t see why Mo should fear it. I’m a journeyman runner in comparison to him.”

The Welshman, who remarkably went through halfway in his British record race in Chicago in around 61:45 (2:03:30 pace) 29 years ago, added that much can go wrong in a marathon and in fact remembers dropping out of his own first crack at the distance. Eamonn Martin, the last British man to win in London in 1993, is similarly cautious, saying: “Mo’s capable of winning but there is a lot that can go wrong. Many great runners have failed to step up successfully.”

Others are not quite so diplomatic. Tsegaye Mekonnen, one of the Ethiopian contenders, says Farah definitely won’t win and should stick to track racing. It would be easy to dismiss the 18-year-old as a teenage upstart if he hadn’t run an impressive 2:04:32 to win Dubai in January.

The website letsrun.com added fuel to the fire of those who doubt Farah’s ability to master the marathon by running a piece that listed five reasons why he won’t win on Sunday. These ranged from him being more naturally suited to 1500-10,000m to the fact he’s lost his last two races in the Bupa Great North Run and NYC Half.

On the positive side, the sight of fellow track specialist, Kenenisa Bekele, winning the Paris Marathon with relative ease in 2:05:04 gives Farah confidence. Even the defending champion in London, Tsegaye Kebede of Ethiopia, conceded: “Kenenisa’s run in Paris shows Mo Farah can do well here.”

Kebede and his younger fellow countryman Mekonnen are among a large number of athletes who stand in the way of Farah and an historic victory on the streets of the British capital. Added to this, Ibrahim Jeilan, Feyisa Lilesa and Ayele Abshero complete a formidable quintet of Ethiopian contenders.

The diminutive Kebede has won London twice in the past – in 2010 and 2013 – and has risen from a humble and hard childhood that saw him collecting firewood for 30 cents a day. Officially, he is 5ft 2in, but he barely looks 5ft and has the physique of a child. He also grins mischievously like one, especially when Farah’s name is mentioned on conjunction with taking his title.

Sporting an even wider grin during the pre-race press conferences was Jeilan. With a bushy beard and bald head, he was one of the quirkiest, coolest characters during the race-week interviews and beat fellow marathon rookie Farah to 10,000m global gold in 2011 before narrowly losing his title in Moscow last summer. Relative outsiders, the final Ethiopian challengers Abshero and Lilesa are only listed eighth and tenth in the betting odds yet have run 2:04:23 and 2:04:52 respectively.

The Kenyans are no less formidable. Wilson Kipsang leads the way – and is the bookies’ favourite – courtesy of his world record of 2:03:23, which he set in Berlin in September. The 32-year-old also won in London in 2012, before finishing third in the Olympics.

Then there is Geoffrey and Emmanuel Mutai – who are not related but nevertheless difficult to separate when it comes to picking contenders for Sunday. Geoffrey ran 2:03:02 – the fastest marathon in history – on a downhill course in Boston in 2011 and he beat Farah over a half-marathon in New York City last month after the Briton fell during the race. Emmanuel, meanwhile, ran 2:03:52 to win Chicago in October and was second in London last year after fading in the closing stages.

Stanley Biwott, the 2012 Paris Marathon winner in 2:05:12, completes the Kenyan challenge. Then, finally, one of the most intriguing entrants of all – Stephen Kiprotich of Uganda, whose best time is a mere 2:07:20 but whose championship record is impeccable, with victories in the London Olympics and 2013 IAAF World Championships in Moscow.

In addition to Farah, Chris Thompson and Scott Overall will also be striving to inject pride back into British men’s marathon running. The duo plan to run at 2:10 pace and, if they feel good, hope to bash through that barrier.

After an encouraging 2:10:55 debut in Berlin 2011, Overall is keen to re-establish himself with a solid run and says he over-trained before the Olympics and was slightly injured before last year’s London. Thompson, meanwhile, is making his debut and says the high volume training has, ironically, resulted in fewer injury problems than the high-quality 5000/10,000m sessions he is more used to. 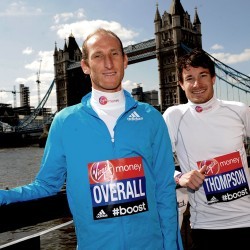 Thompson is also rumoured to be in great shape and interestingly both Brits have been advised in the build-up by Alan Storey. The former UK Athletics head of endurance and coach to Farah, Sonia O’Sullivan, Mike McLeod and many others, the ultra-experienced Storey has a remarkable background and few athletes will have a more knowledgeable man in their corner.

That’s apart from Farah himself, of course, who is coached by Alberto Salazar. A marathon winner in Boston and three times in New York City, the 55-year-old will have left no stone unturned during Farah’s build-up and even his athlete’s recent fall in the NYC Half did not phase him. “Alberto told me to get up and stop faking it!” Farah said this week.

Jokes aside, that fall was a stark reminder that the marathon is a tale of the unexpected and a lot can happen over the course of 26.2 miles. It is not quite as difficult to predict as the Grand National horse race, but it can sometimes feel that way.

The women’s race is similarly stacked, making this arguably the strongest London Marathon in history. Priscah Jeptoo is favourite courtesy of her 2013 London Marathon win and emphatic victory in the Bupa Great North Run in September. Fellow Kenyan contenders on Sunday include Florence Kiplagat, the two-time Berlin Marathon winner and world half-marathon record-breaker with 65:12 from Barcelona in February, plus 2011 and 2013 world marathon champion Edna Kiplagat.

Despite only being a 12/1 fifth favourite, most interest will centre on Tirunesh Dibaba. One of the greatest runners in history, the 28-year-old has won three Olympic and five world gold medals on the track, plus five world cross country titles.

Tiki Gelana, the Olympic champion, joins Dibaba in a strong Ethiopian team. The 2:18:58 runner will be keen to make her mark after a collision with wheelchair racer Josh Cassidy ruined her 2013 London race.

Another Ethiopian, Aberu Kebede, has won marathon in Berlin, Tokyo and Rotterdam in the past and has a best of 2:20:30. In addition, fellow countrywoman Feysa Tadesse won Paris last year in 2:21:06.

In the wheelchair races, David Weir is attempting to win a record seventh title in front of his home crowd, while Tatyana McFadden of the United States is going for gold in the women’s race after recently winning silver in the cross-country skiing at the Winter Olympics.

The races are incredibly difficult to call, but the good weather forecast means the men’s course record of 2:04:40, held by Emmanuel Mutai, and women’s-only world record of 2:17:42, set by Paula Radcliffe, are under threat.

As for winners, while I’d love to see Farah win on home soil, he will do well to break the British record and make the top three on his debut. Kipsang, Kebede and Geoffrey Mutai have earned the right to be favoured ahead of him and it is difficult to look beyond that trio, while the teenage Mekonnen and enigmatic Jeilan are fascinating outsiders.

As for the women’s race, if Dibaba is in shape then she has the class to win. The Ethiopian usually only does what is necessary, though, so she is unlikely to get close to Radcliffe’s outright world record of 2:15:25.

Elsewhere, we will surely be reminded of how brilliantly Britain can stage major athletics events. After the farce of the Sheffield Half-marathon last week, the super-slick Virgin Money London Marathon team is certain to get things back on track.