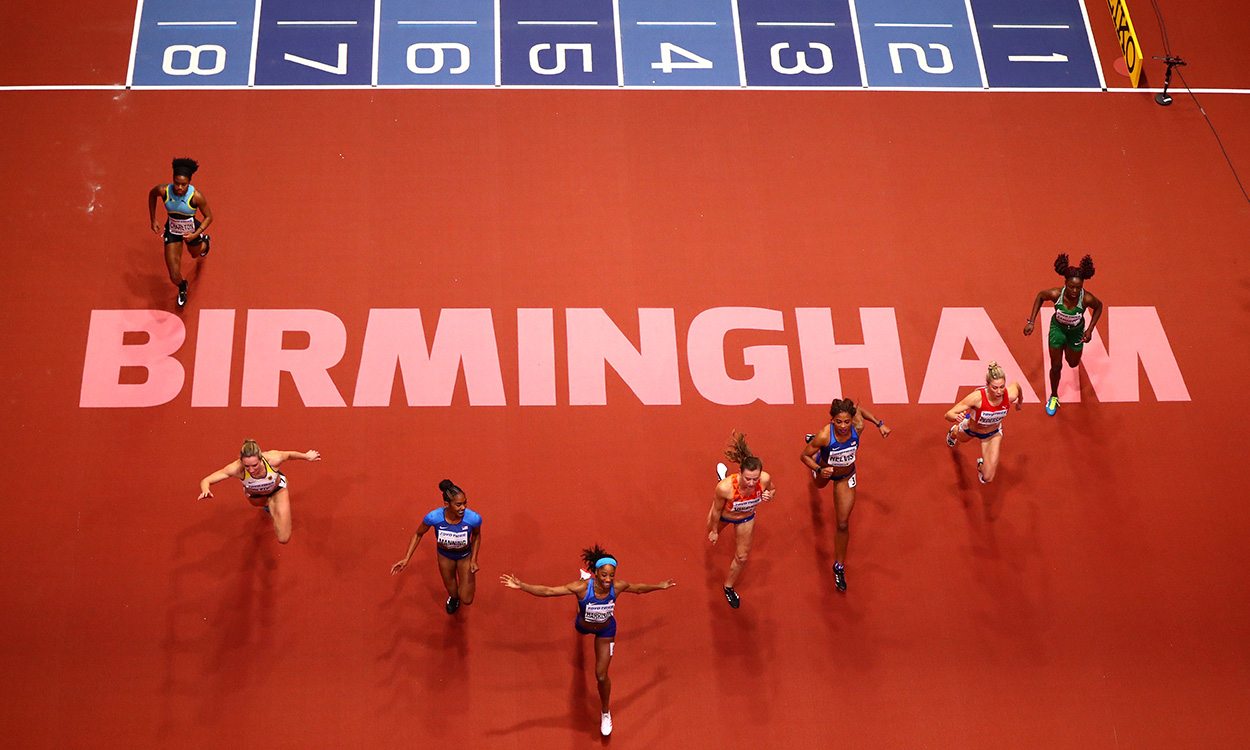 Arena Birmingham looks considerably different than it did two weeks earlier at the Spar British Indoor Championships. With the lights dimmed in the seating areas, it is all very theatrical as the high jump and 3000m are showcased on the opening night.

Unfortunately, though, the Beast from the East which has ripped through the country means many spectators have stayed at home due to weather-related travel problems, leading to lots of empty seats.

Among those not to make the championships are former AW editor Mel Watman and Stan Greenberg after they decided it was unwise to travel from their homes in London. Two of the stalwarts of the press stands, if Mel and Stan can’t get to Birmingham then the conditions must be pretty bad! 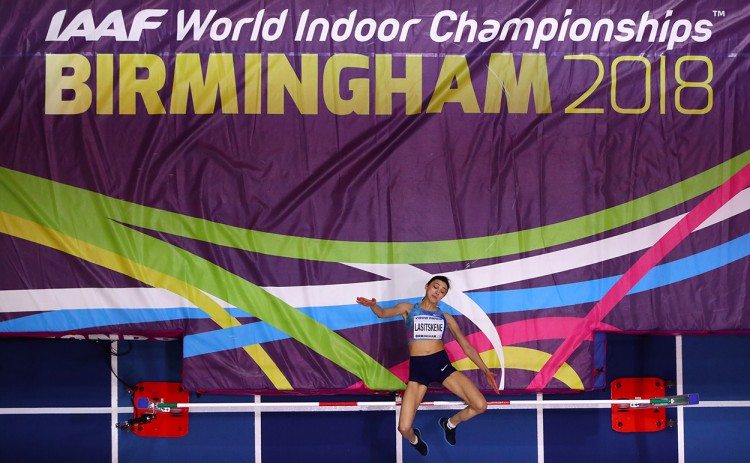 For those who were able to make it, Seb Coe sets the scene for the four-day championships by talking about the exciting action in store. His speech also mentions the IAAF’s coverage of its own event, which involves blogging, social media galore, multiple reports and previews put together by ’10 editors’ in the media area. With so much online coverage, I wonder for a moment if I should have bothered turning up.

I remember when her track career ended her management agency wrote to AW to ask if she could write one or two pieces for the magazine as she was trying to get into media. We did indeed run some – and they were good – and she’s gone to strength to strength and become one of the main voices of the sport on TV and radio.

As for the morning session itself, unfortunately it’ll be best remembered for every sprinter in heat three of the men’s 400m being disqualified for lane infringements and a false start. As the championships unfold, the large number of DQs in the track events becomes a major talking point and perhaps the increasing use of cameras is the reason.

British medal chances coming into these championships felt a little slim. This had much to do with the clash with the Commonwealth Games. Back in 2006, for example, the British team at the World Indoors in Moscow failed to win a single medal as the event fell just a few days before the Commonwealth Games in Melbourne.

This time the squad is more successful, though, with Katarina Johnson-Thompson winning pentathlon gold on the second day of the champs. It’s always nice to follow an athlete through from junior ranks to senior glory and I remember watching KJT at the English Schools years ago as a super-talented teenager.

It’s taken her a few years to win her first senior global crown but it’s come at last and now she could gain her second gold medal in the space of a few weeks on the Gold Coast next month. 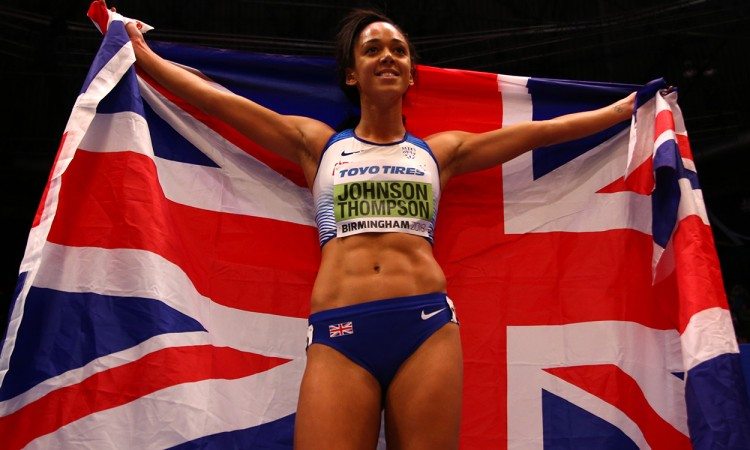 Morning sessions used to be full of heats and rounds but they are now peppered with field events finals and Saturday’s session sees an excellent men’s shot won by Tom Walsh and women’s triple jump with Yulimar Rojas.

I also spend some of the morning at a KJT media event where, still full of a cold, she sniffs and snorts her way cheerfully through a bunch of questions, although it is all minus her gold medal as it has been taken away to be engraved.

Later, I escape the stadium briefly for some food and see a wicker man figure of Usain Bolt, designed in such a way that it points people to the arena. Ironically Bolt never competed indoors and he’s now retired but he’s still the sport’s biggest name.

The lights in the Arena Birmingham stands are so dim that the ever-helpful media liaison staff bring around small desk lamps so we can see our keyboards.

Down in the arena, it’s a hectic session with Christian Coleman winning the men’s 60m after British hope CJ Ujah is controversially disqualified in the semi-final, Laura Muir wins 1500m silver behind Genzebe Dibaba, Sandi Morris wins a high-quality pole vault and in the men’s 800m Elliot Giles goes from fourth to third and back to fourth as DQs and protests abound. 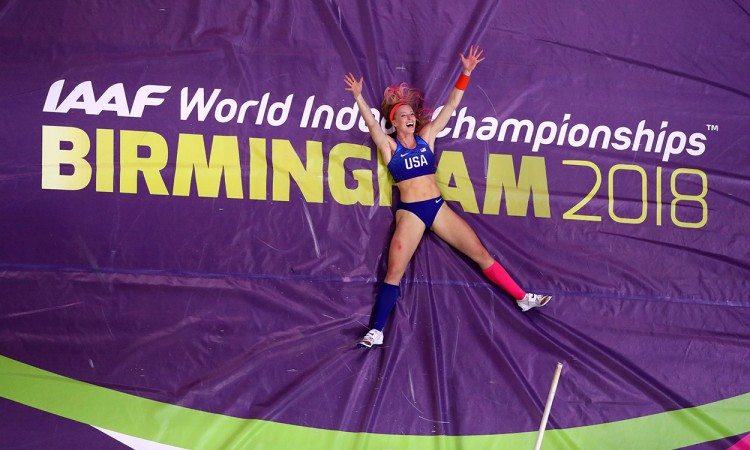 By the end of the session my head is spinning. Added to this, I hear a rumour from someone at the BBC that Sir Roger Bannister has died. Myself and my colleague Jess Whittington discuss preparing an obituary but it is late – now around midnight – and we hope the sad news proves not to be true. But back in my hotel room at 1am I start writing a few words.

Meanwhile, another editorial colleague in Birmingham, Steve Smythe, has got a train back down to London to cover the Vitality Big Half and he plans to return to Birmingham after the race for the final session on Sunday afternoon.

After spending a couple of hours catching up with writing reports, I head to the launch of an IAAF Heritage collection at the Council House in Birmingham’s city centre and I’m literally entering the building at 11:30am when our proof-reader, John O’Hara, calls me to say the news about Sir Roger is on BBC news bulletins. I hang up to call Jess to ask her to put our obituary live on our website asap and at the same time a text lands from our products reviewer, Paul Freary, who tells me the news and reminds me he’d bought a special signed print of the sub-four-minute mile moment only a few weeks earlier.

Not surprisingly the IAAF Heritage event is late starting as Seb Coe is presumably giving quotes back stage for TV and radio. He eventually appears for the Heritage ceremony and reads a few lines of tribute about his fellow supermiler before accepting Heritage donations from athletes Stacy Dragila, Yulimar Rojas and Jason Gardener, the latter of whom goes up on the stage carrying one of his gold medals and an old issue of AW where he is on the cover.

"He made the impossible possible. His achievement transcended sport, not just athletics." pic.twitter.com/G51TfZ1P2K

The final session features a string of finals. Steve arrives back at the arena from the Vitality Big Half but unfortunately also with a smashed screen on his laptop. He can only see the right side of it and has to improvise over the next 48 hours before AW goes to press in order to get his work done.

The championships finish with a brilliant and slightly unexpected gold from Andrew Pozzi in the sprint hurdles, plus a world record in a dramatic men’s 4x400m as Poland over-take the United States in the final metres and a top-class pole vault won by Renaud Lavillenie. 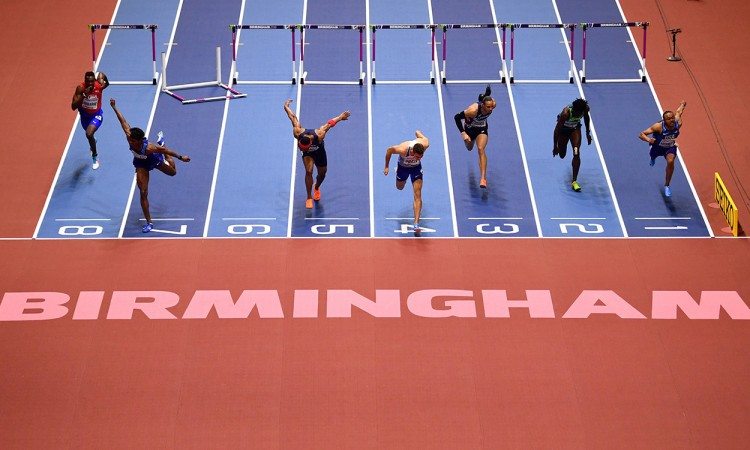 For many, the No.1 talking points of the championships are the spate of track disqualifications and snow-related travel issues, but there was also plenty of magnificent athletics on display.

After finishing our website reports by about 9pm, myself and Jess head to Five Guys on nearby Broad Street for a burger and fries and we spot 60m winner Coleman in there with a few of his US team-mates.

Despite being the fastest man in the world and having won a world title a few hundred yards away the previous day, no one really notices him.

The AW team does, though, and Jess goes over to give him our preview issue of the magazine, where he was our pre-championships cover star.

With the website reports finished, we now tackle the magazine articles. There is still much to do. So much so that our photographer, Mark Shearman, cancels his plan of travelling back home to south London and instead books another night in Birmingham so he can sort out all his images.

The following day I get the train home (luckily, I’ve avoided the travel problems on the way to and from the championships) and en route we finalise our front cover with the two British gold medallists and an image of Sir Roger.

It’s been a tough magazine to finish – and also a strange one as we go to press with less than half as many results pages as usual due to snow and ice leading to so many events being called off.

Here’s a look at the cover of today’s AW and some of what you can find inside, including big @WICBham2018 coverage, tribute to Sir Roger Bannister, @OfficialBigHalf report, the latest news, performance features and more… pic.twitter.com/MiIhmW2Tfk