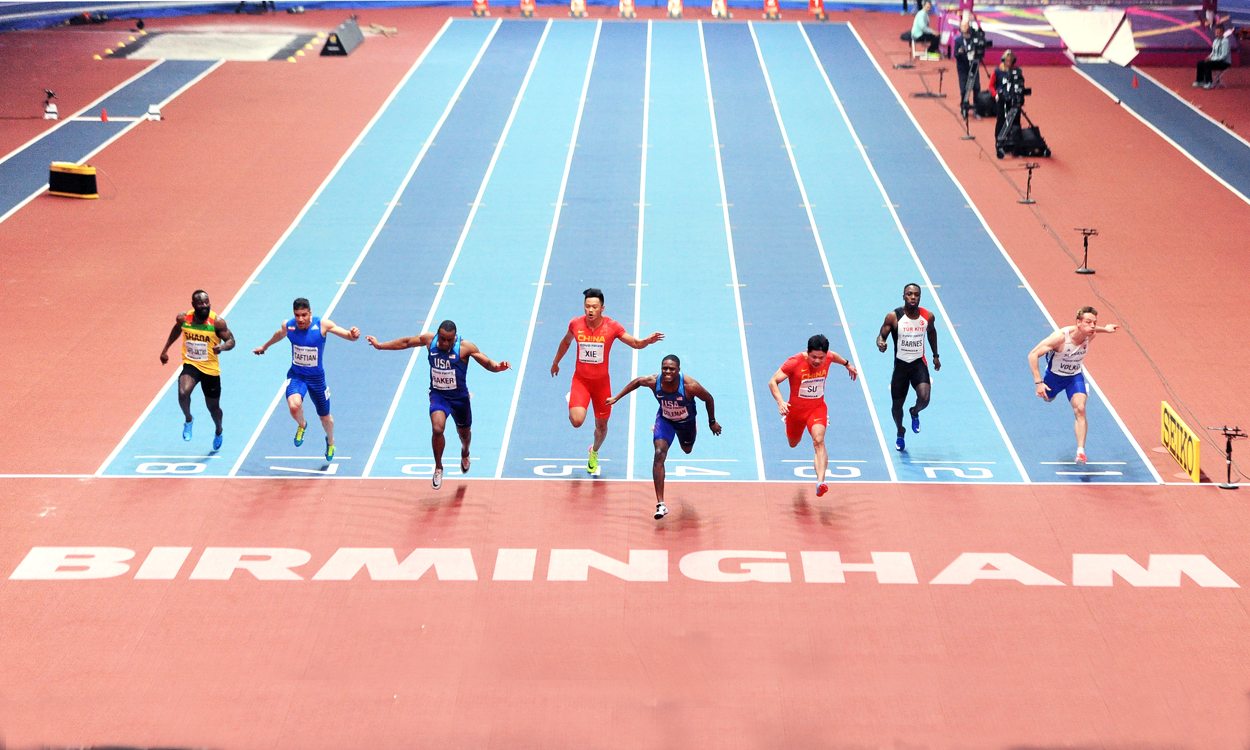 No athlete arrived in Birmingham surrounded by so much hype and anticipation as Christian Coleman. The American sprinter had smashed the world 60m record in the run-up to the championships and he lived up to his reputation by taking gold in a championships record of 6.37.

Producing his usual blistering start, Coleman saw off the challenge of Su Bingtian of China, who improved his Asian record to 6.42, while his US team-mate, Ronnie Baker, won bronze in 6.44.

“I don’t think I can ever get used to this kind of feeling,” said Coleman. “You work so hard and put so much emphasis into running and you’ll never get tired of the feeling of winning.”

.@__coleman on how it feels to win the world indoor 60m title. No big celebrations planned – “I won’t really do much. It’s really cold outside so I don’t plan on going outside much! I’ll just let it soak in a little bit and then start preparing for outdoors.” #IAAFworlds pic.twitter.com/YllBX1Br3Y

Runner-up Su said: “I was always so close to the medal in recent championships so finally I got it. Back home, I expect there will be a big celebration as this is my dream come true.”

In fourth, another Chinese athlete, Xie Zhenye, ran a PB of 6.52, as Sean Safo-Antwi – the Enfield & Haringey sprinter who switched from GB to Ghana two years ago – was seventh in 6.60.

Not surprisingly, Coleman is now being billed as the man to take over Usain Bolt’s mantle as the world’s No.1 sprinter. He said: “I have a good chance to lead the sport in the post-Bolt era but like I’ve told so many others, loads of guys have the talent.

“I have to make sure I keep working to stay on top and when you get the opportunity to take gold medals you take them.”

Earlier, there was disappointment for British champion CJ Ujah as he was disqualified in the first semi-final for a false start, while his GB team-mate, Andrew Robertson, also exited after finishing fifth in his semi-final in 6.63.

Undefeated in 2018, Adam Kszczot was the man to beat in the men’s 800m final and no one could manage it as the Pole ran his usual tactically sound race to take gold in 1:47.47.

Kszczot finished ahead of Drew Windle of the United States, Saul Ordonez of Spain and Elliot Giles of Great Britain, but there was drama as Windle was disqualified, meaning Giles moved up into third, only for the decision to be reversed and the original results reinstated about 90 minutes later following an American appeal.

In a typically cagey indoor race, the field passed 400m in 55.77 but Kszczot ran the second half of the race four seconds quicker as he stormed away.

“It may look easy from the outside but it was a very difficult race, especially mentally,” said Kszczot. “I knew that the Spaniards would watch me but I was ready for this. I knew how to deal with it.”

Giles said: “It’s all been quite surreal. We put so much effort into the sport and then our race is over in under two minutes. The decision that is made has to be the right one, so I accept it.”