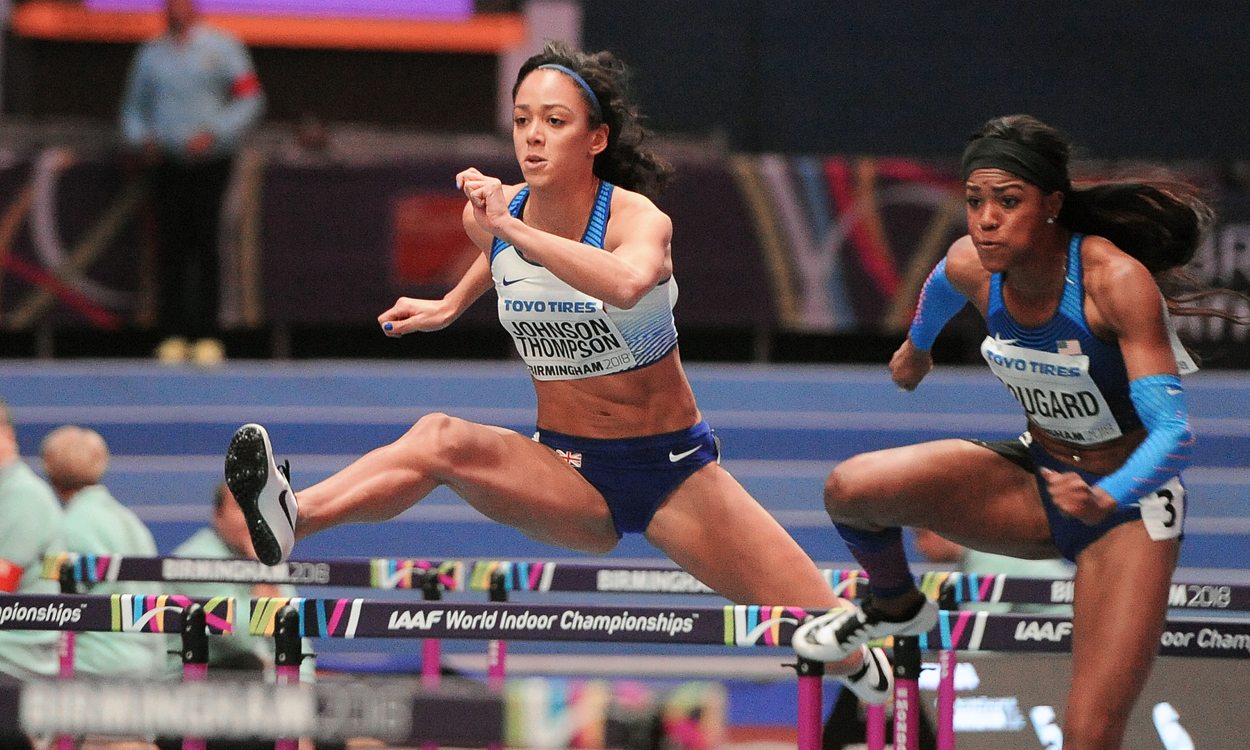 Katarina Johnson-Thompson will be going for gold on Friday evening in Arena Birmingham after a pleasing first session.

The 25-year-old is 13 points behind Yorgelis Rodriguez of Cuba with two events to go – the long jump and 800m – in the women’s pentathlon.

In the opening event, the 60m hurdles, Johnson-Thompson finished fifth in her heat with 8.36 compared to her PB of 8.18. But her high jump was much better as she cleared 1.91m to gain some valuable points over her rivals.

This meant the former European indoor champion went into the third event of the pentathlon, the shot put, with a slim lead over Erica Bougard of the United States with Rodriguez third.

Then, in the shot, Johnson-Thompson threw an indoor PB of 12.68m to keep in contention. Rodriguez threw 14.15m and Bougard 12.31m, while Antoinette Nana Djimou of France led the pentathletes with 15.52m.

Rodriguez said: “I didn’t expect to be leading after the shot put but I thought I’d be in the top three, maybe. I came here hoping for a medal but I didn’t think it would be gold. Now I want to long jump 6.20m and run 2:15 in the 800m. Whether that will be good enough I don’t know. Now I am here for gold.”

Friday evening’s session begins with one of Johnson-Thompson’s strongest events, the long jump, followed by the 800m at just after 8pm.

There was a dramatic first round to the men’s 400m as a whole heat was disqualified. After 2017 world bronze medallist Abdalleleh Haroun, who won 2016 world indoor silver, left the track for a false start, the third heat was won by Grenada’s 2016 fourth-placer Bralon Taplin in 46.37. However, a short while later the whole field was listed as ‘DQ’, with all athletes except the Qatari sprinter disqualified for lane infringements.

Slovenia’s Luka Janežič went quickest in the first round with 46.45, while Lee Thompson – making his GB senior team debut – ran his third quickest ever 400m with 46.81 to finish second in heat five following the disqualification of winner Nery Brenes of Costa Rica. Two-time world indoor champion Pavel Maslák and 2012 Olympic silver medallist Luguelin Santos will be among those joining Janežič and Thompson in this evening’s semi-finals.

The women’s 60m looks like it will be a competitive event with nine athletes running within a tenth of a second (7.11-7.20) in the first round.

After only joining the GB team earlier in the week following the withdrawal of Daryll Neita, Bianca Williams got a good start in her 60m heat but could not get one of the automatic top three spots and finished fourth in 7.31 in a race won by Ezinne Okparaebo’s 7.22.

Heat two was won impressively by Marie-Josee Ta Lou in 7.17 from double Olympic champion Elaine Thompson’s 7.20. Dafne Schippers won heat three in 7.19 while Carolle Zahi’s 7.11 PB headed Mujinga Kambundji’s 7.15 in heat four. Frenchwoman Zahi was surprisingly the quickest of the round, too.

In the women’s 400m, Britain’s Zoey Clark and Eilidh Doyle got through their heats successfully. Clark won her heat in 52.76 while Doyle was second in her race in 52.31 behind Jamaican Stephenie Ann McPherson’s 52.18.

Courtney Okolo of the United States led the qualifiers with 51.54 from McPherson, while Doyle was the fourth fastest of all. Ireland’s Phil Healy, meanwhile, who was third in Doyle’s heat, qualified as a fastest loser with 52.75.

World decathlon champion Kevin Mayer looks set for a big score in the heptathlon after the morning’s events.

Canadian Damian Warner started the first event in style, winning the first 60m heat very easily in a PB 6.74. Pre-event favourite Mayer won the second heat in a big PB of 6.85 to trail Warner by 41 points after one event, while Zachery Ziemek was third overall with a 6.89 clocking.

Kaz Kazmirek was the pick of the long jumpers with a 7.68m effort but Mayer’s superb form continued as he achieved another PB of 7.55m, while Warner’s 7.39m proved just enough for the Canadian to retain the lead on 1885 points from Mayer’s 1883. Oleksiy Kasyanov moved up to third on 1818 with Kazmirek up to fourth on 1812.

Mayer’s momentum looked to be slipping as he opened the shot with a no throw followed by a dismal 14.49m but he showed his competitiveness with a superb 15.67m to win the competition from Lindon Victor’s 15.54m.

The Frenchman, wearing one black and one white shoe, looked delighted and celebrated loudly. That put Mayer ahead overall on 2714 from Warner’s 2669 and then there is a big gap to Kazmirek’s 2572 and Kasyanov’s 2556.

Despite good support from his fellow Birmingham University students, an out of sorts Jonathan Davies struggled, although after an incredible four disqualifications among his competitors, the Briton was promoted to sixth in 8:21.73.

The disqualifications included Olympic 5000m silver medallist Paul Chelimo of the USA, who thought he had safely qualified.