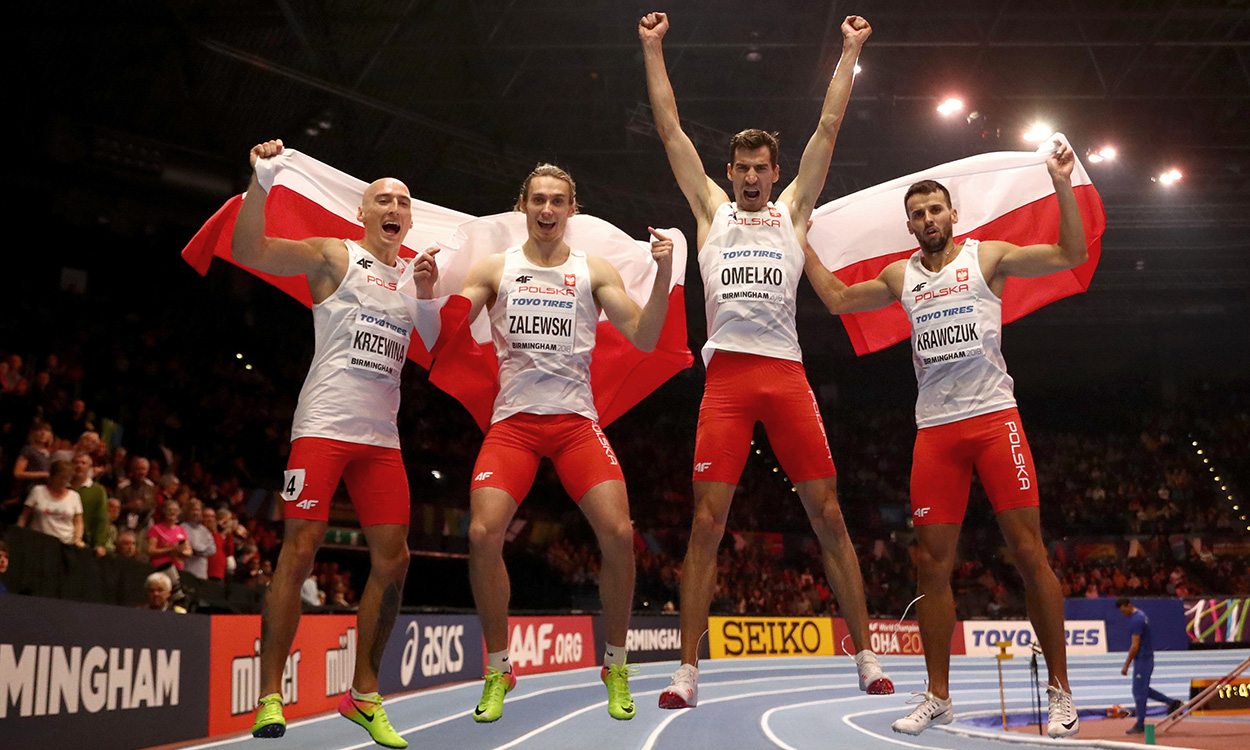 Concluding its action just over one week ago, the IAAF World Indoor Championships in Birmingham served to showcase the eight nations due to compete at this summer’s Athletics World Cup as some of the very best in the world.

Featuring all eight field events alongside all track events from 100m through to the 1500m, plus 4x100m and 4x400m relays, the Athletics World Cup will follow on from the success of London 2017, which saw the capital become the first city ever to stage both the World Para Athletics and IAAF World Athletics Championships in the same year.

Fresh from enjoying their best-ever showing at the World Indoor Championships with two gold and five medals in total in Birmingham, Poland have set their stall out for potential Athletics World Cup glory come July, particularly in the 4x400m, an event in which they broke the men’s world record to pip the USA to gold (pictured).

The USA’s 18 medals – six gold, 10 silver and two bronze – ensured they streaked clear at the top of the medal table. Winning silverware across the board in numerous track and field events as they so often do, the global powerhouse is sure to bring an abundance of talent to London in four months’ time.

Closer to home, and notching their equal second-best medal haul at the world indoors, Great Britain & Northern Ireland’s total of seven medals courtesy of the sprint hurdles, pentathlon, 400m, 800m, 4x400m, 1500m and 3000m showcased a versatility and strength in depth that bodes well for the inaugural Athletics World Cup.

Those who travelled from further afield made history of their own, too: China won their first ever world 60m medal thanks to Su Bingtian, the sprinter running the fastest ever time recorded by an athlete from Asia, while South Africa scooped a world-class silver medal of their own courtesy of Luvo Manyonga in the long jump, their first world indoor medal for eight years.

Alongside GB & NI, fellow European federations to be involved in the Athletics World Cup fared impressively; France’s eight-strong team finished with three medals, two of which were gold, to claim fifth in the medal table, and Germany’s fifth-place finish in the placing standings puts the nation in superb stead for the summer.

Finally, Jamaica’s Daniel Thomas-Dodd showed that they are not just a nation of sprinters as she confirmed her position as the Athletics World Cup shot put favourite thanks to a silver medal with a Jamaican record throw, with the federation now hoping for yet another successful Commonwealth Games showing before they head to London in July.

“Seeing the eight Athletics World Cup nations win a staggering 41 medals, 12 of which were gold, at the IAAF World Indoor Championships shows that we are in for a fantastic event come July 14-15,” said chief executive of the Athletics World Cup, Niels de Vos.

“With the Athletics World Cup being team-orientated it is really important that each event is competitive as the next, and both the medal and placings table from last summer and the World Indoor Championships serve to support the fact that this will be the case based on the eight nations we have on board.”

Registrations for the Athletics World Cup are now open at athleticsworldcup.org, with the closure in the days prior to April 4 to be followed by a ticketing ballot.