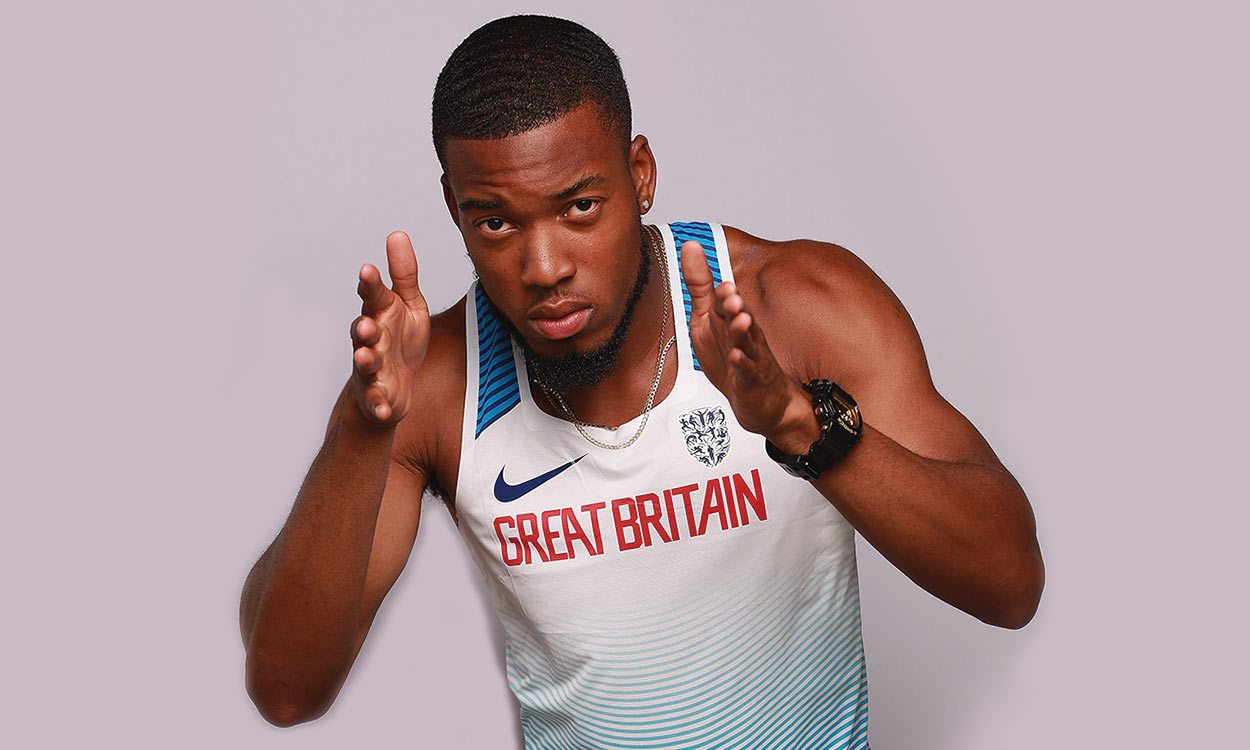 Five years ago, Nethaneel Mitchell-Blake was watching the London 2012 Olympics on a laptop in an office in Jamaica.

Undertaking an internship over the summer, his days were filled with filing and scanning but his breaks were dedicated to catching up on the track action taking place four and a half thousand miles away in the UK capital.

While he was proud to be working that summer job, athletics was where his heart was at.

“I remember all the interns would come in wearing jeans and a shirt but I took it seriously – I put on my slacks, a shirt and a tie,” Mitchell-Blake smiles. “I had a briefcase with nothing in it!

“I kind of set the trend because everyone was like ‘look what he’s doing, we’ve got to do it too!’

“I remember watching Adam (Gemili) in the 100m and the 4x100m guys and I just said, ‘I need to be there, I need to ensure that I get myself there somehow’,” he adds. “I’ve been blessed and fortunate enough to be able to make that prophecy come true.”

His days in an office might now be long gone, but Mitchell-Blake continues to be a trend setter. With a 200m PB of 19.95 which places him second on the UK all-time list behind only John Regis, the 23-year-old is leading Britain’s current crop of half-lap sprinters and he doesn’t show signs of slowing any time soon.

Born in Newham, the sprinter joined Ilford AC as a child but moved with his parents to Jamaica when he was 13 years old. ‘British’, as he was known by many of his friends in Jamaica due to his London accent, would later move to a third country after catching the attention of Louisiana State University in the USA.

Mitchell-Blake is now only the second GB sprinter after Gemili to have gone both sub-10 and 20 seconds for 100m and 200m respectively.

The 2017 NCAA silver medallist never lost touch with British athletics, however, and competed for the nation at both the 2011 IAAF World Youth Championships in Lille and the 2013 European Junior Championships in Rieti, where he led a GB clean sweep ahead of Leon Reid and Matthew Hudson-Smith.

Despite racing for Britain as a teenager, plus at last year’s European Championships and the Rio Olympics, this year’s national championships in Birmingham marked Mitchell-Blake’s return to UK competition for the first time in a decade. The Dennis Shaver-coached athlete broke the championship record to claim the 200m title in a high-quality final and secure his spot on the GB team for the IAAF World Championships in London, where he intends to make even more of an impact on home soil.

“Running at the trials was definitely a very emotional experience for me,” he says. “Being based in the States, you always see what’s going on and I never had the opportunity to run at the trials. Then you hear the rumours, ‘well, he can only run in America, he can’t run in England’ and I had a little chip on my shoulder!”

With Usain Bolt concentrating on the 100m, the 200m looks a more open event and Mitchell-Blake has world medals on his mind.

“Who doesn’t want gold?” he says. “I definitely feel that my coach and I are doing things right – my body is feeling really good, it’s a home championship. With a home crowd behind you, it’s like a 12th man in a football stadium. There’s a reason why you win more games at home than away so I feel this could be a special championship for the country.

“Hopefully we can change the culture on a whole to say that making the team is not enough, making the heats is not enough. We want medals,” adds Mitchell-Blake, who will be joined by team-mates Danny Talbot and Zharnel Hughes in contesting the 200m and will have his family back in East London supporting him in the stadium that he saw on his laptop screen in 2012.

“I believe we have a young group who are all motivated and are starting to believe in themselves. You will see a change in British sprinting, I guarantee you. The times that we are running are competitive enough to compete with the world’s best.”

» The men’s 200m gets under way with the heats on Monday evening, before the semi-finals on Wednesday evening and the final on Thursday at 21:50