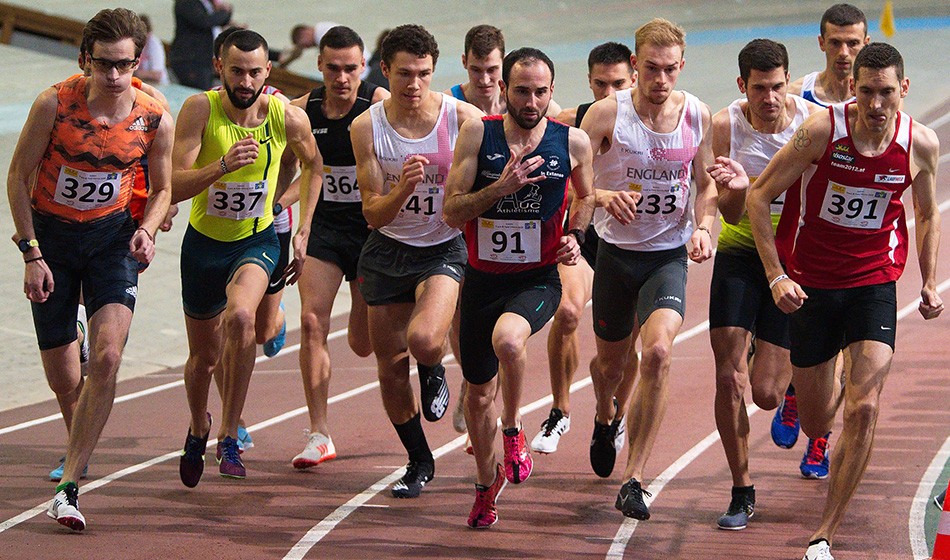 Tom Keen’s recent performances prove that the 17-year-old has taken some big changes to his life firmly in his powerful stride.

The Cambridge and Coleridge athlete moved north to study and train at the University of Birmingham, where he is on a foundation year studying bio sciences. The alteration in living arrangements and the athletes he trains with on a daily basis could have been unsettling, but Keen is instead charting new territory on the track.

After beginning 2020 on a winning note with a commanding under-20 victory at the British Athletics Cross Challenge in Stirling, he had a solid if reasonably unspectacular run out when coming fourth over 1500m in Sheffield.

His next race would set him apart, however. Keen (pictured above, fourth from left) may have finished third at the Vienna Indoor Classic but his time of 3:41.44 eclipsed the British junior record of 3:42.87 set by Matt McLaughlin in 2013.

“One of my goals was to break the record,” says Keen, who will compete in the British Championships 1500m in Glasgow this weekend.

“I did a race in Sheffield in January and I ran 3:46 but I felt like I had a lot left in me and I crossed the line thinking ‘I should have committed to the race a bit earlier’.

“I was really aware of that when I came into the race in Vienna and I had it in the back of my mind that it (breaking the record) was possible. It was really exciting for me.”

The resulting surge of confidence has been significant.

“With the move to Birmingham Uni, a new training environment and new training schedule – to know that’s all paying off and I’ve fitted in quite smoothly so it’s a real confidence booster,” says Keen, who is coached by long-term mentor Mark Vile whilst also working with Luke Gunn in Birmingham.

“Luke will set a session and I’ll speak with Mark and he’ll alter it slightly, making it more personal to my strengths and what I need to work on,” continues Keen.

“It didn’t take me long to get used to the way they trained, it was pretty similar, but I think the biggest difference is that we do tempo running, which is something I’ve never really experienced before.

“But everything else, the sessions, the strength and conditioning, I feel like I’m coping with it all and the change pretty well.”

Keen’s results certainly indicate that and the 2018 European under-18 3000m champion is now setting his sights on the 1500m at this summer’s World Athletics U20 Championships.

“I want to make the final – that’s aim number one,” he says. “I think top six would be a really good race and anywhere around there I’d be really happy with.”

He adds: “I feel that the indoors is always a good way of boosting your confidence going into the track season. The outdoors is where it’s at and where I want to be most successful – I really can’t wait for the summer to come along now.”

» This interview was part of a three-page feature highlighting the record-breaking performances by Keely Hodgkinson (click here to read), Tom Keen and Lewis Byng (click here to read) first published in the February 13 edition of AW magazine, which is available to order in print here or read digitally here