Tickets back on sale for all London 2017 sessions

Tickets are back on sale for both the World Para Athletics Championships and the IAAF World Championships London 2017, with availability once more within all sessions.

Organisers have also increased the availability of the popular ‘Bolt ticket’ – a £9.58 children’s ticket in honour of the legendary Jamaican’s 100m world record, following the response from families purchasing tickets.

It will the first time ever that a city has hosted both world championships in the same summer, with the World Para Athletics Championships taking place from July 14-23 and the IAAF World Championships from August 4-13 and both events are already celebrating record ticket sales with little over four months to go.

Tickets were first put on sale via an application process in August 2016, with high demand seeing over 1 million tickets requested. Over the past few weeks, tickets have been off sale while customer orders were allocated to specific stadium seats.

“It’s great that the Bolt children’s ticket has sold so well and that more children will get the chance to attend,” said Bolt. “Athletics is a sport for all the family and it’s great to know that so many different age groups will be there in the stadium as a result of this offer.

“It feels good as an athlete to know children are getting a chance to enjoy the sport that has been so good to me.”

London 2017 Ltd championship director, Niels de Vos, said: “It’s brilliant to return to on-sale with availability across all sessions in both Championships. Since we opened up for sales last summer, first to the athletics family, then through to the ballot phase and eventual first-come-first-served sale, we’ve seen an amazing response.

“We’re also thrilled to be able to increase the availability of our ‘Bolt tickets’, which alongside the World Para Athletics schools offer will ensure hundreds of thousands of children will be a part of the Summer of World Athletics.” 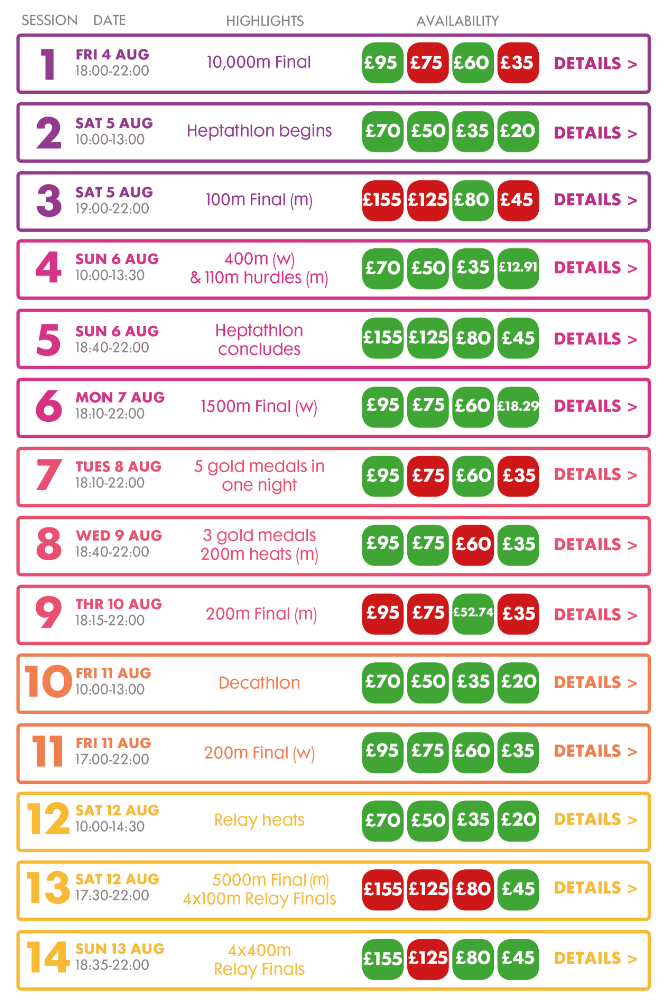 Since the start of this week, ticket holders have been able to sell any unwanted tickets via an official resale system using their official ticket account. The free system – which has been set up to ensure safe and responsible resale practices – enables genuine fans of the sport to regain the face-value cost of the tickets they have purchased, and for others to buy a genuine product via tickets.london2017athletics.com.

From March 8, fans will also be able to purchase tickets via the official ticketing website for the special Trackside Lounge package – a VIP offer available for sessions 1, 3, 9, 13, which includes the opening ceremony, men’s 10,000m, men’s 100m and long jump. The package includes a top-category ticket overlooking the home straight, live TV feeds, event programme, food and cash bar from one of the stadium’s premium spectator locations. Prices start from £299.