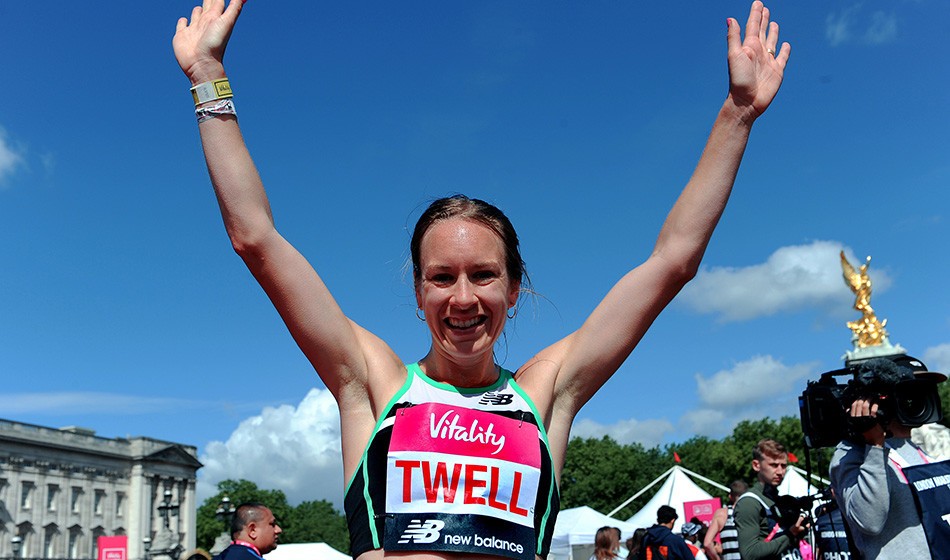 The many different elements to Saturday evening’s Mattoni Olomouc Half Marathon mean Steph Twell is really relishing the opportunity as she returns to racing after a stint of altitude training in St. Moritz.

The 29-year-old has already improved both her half-marathon and 10km PBs in 2019 and is looking forward to testing herself at a race she describes as “a bit of an undiscovered gem”.

The Olomouc Half Marathon is an IAAF Gold Label race and as a result it offers athletes the chance to gain points in the IAAF world rankings, while it is also the third race in the EuroHeroes Challenge series which was launched last year with the support of European Athletics and aims to celebrate and encourage athletes from the continent.

Twell is looking to be competitive at the front of a European-only field and also gain experience of racing in warm conditions, with temperatures set to be around 28°C when the race sets off at 7pm local time in Olomouc, a city situated 179 miles south east of the Czech Republic capital of Prague.

“It’s a new challenge for me to do a half-marathon at this time of year. I’m against a competitive field but one that I hope I can be quite close to the front of,” says Twell, who ran 71:33 when finishing second at The Vitality Big Half in March before getting close to that lifetime best when running 71:37 to win in Reading a week later.

“What was really important for me (in choosing to race in Olomouc) before the British Athletics selection policy came out for the Tokyo (Olympic Games) marathon, was really to try and sort out this confusion with the rankings system that I’m still trying to get my head around.

“It was a bit of an undiscovered gem, really, to have an IAAF Gold Label race at this time of year when maybe not everyone is targeting half-marathon. For me, it’s an opportunity to see where I can position myself and get as many points as possible to help support my opportunity to qualify for the Olympics. To come out here, in an IAAF ‘A’ race, I would love to try and get a podium place, if not a win, against some quality marathon runners.

“There’s that aspect for me personally trying to support myself as strategically as possible ahead of Tokyo,” adds the two-time Olympian. “But secondly, this concept (EuroHeroes) I just think is a fantastic concept. I have found it hard to be supported and to support myself bridging the gap to world-class athletics. I’ve been on the cusp for a long time but for me this year is about being more independent and trying to step up and improve in a new challenge over the roads.”

Interview with @StefApril as she gets ready to race this evening’s @RunCzech Mattoni Olomouc Half Marathon, where points and a podium place are the aim for the in-form Scot on her road to Tokyo. Read more ➡️ https://t.co/F5gfMvFAQJ @scotathletics #OLhalf #Tokyo2020 pic.twitter.com/a5roGZN9Uc

Last year’s inaugural EuroHeroes Challenge series included two events and it has expanded in 2019 to feature four – in Karlovy Vary, Ceské Budejovice, Olomouc and Ústí nad Labem. When European athletes race in at least two of these events their performances are converted to points, with a separate prize structure up for grabs for those at the top of the rankings.

“I think I’ve got experience and history of winning at a domestic and European level on the track, but the EuroHeroes Challenge now offers me a new way to learn about my competitors on the road more regularly. I think it’s going to be a great concept and I’m looking forward to being part of it and seeing it develop and lift off.”

Among those racing against Twell in the elite women’s field on Saturday will be 2:27 marathoner Lilia Fisikovici of Moldova, who will look to continue her winning ways in the EuroHeroes series after having secured success in Karlovy Vary and Ceské Budejovice. Her half-marathon best of 70:45 was set in September.

While she is using Saturday’s race as a chance to test herself  and see where she is currently at, Twell believes there is plenty more to come.

“I think I’m still just touching my potential,” says the now self-coached runner, who improved her six-week-old 10km PB set in Brighton by two seconds with 31:55 to retain her Vitality London 10,000 title at the end of May after having impressed on her marathon debut at the end of last year with a 2:30:11 run in Valencia.

“I think there’s still a lot of improvements to be made, but I’m really happy with my training. I think it really took off from Brighton and I think I have to say that coincided with my change in mindset and my freedom of being coached by myself.

“I’m super happy with where I am at but I have ambitions,” adds Twell, who will return to St. Moritz for a week after Olomouc, ahead of racing at the Highgate Night of the 10,000m PBs. “I’m really serious about understanding more about the training for the marathon and how I can become an overall better athlete from this training and over the 5km and 10km distance.

“My aim has been to use this race now as a three-week block post Vitality London 10,000 and a three-week block prior to Highgate. It’s positioned nicely to see where I’ve come on from, from my previous half-marathons, but also equally to give me some indication of how to pitch my training for the marathon this autumn.”