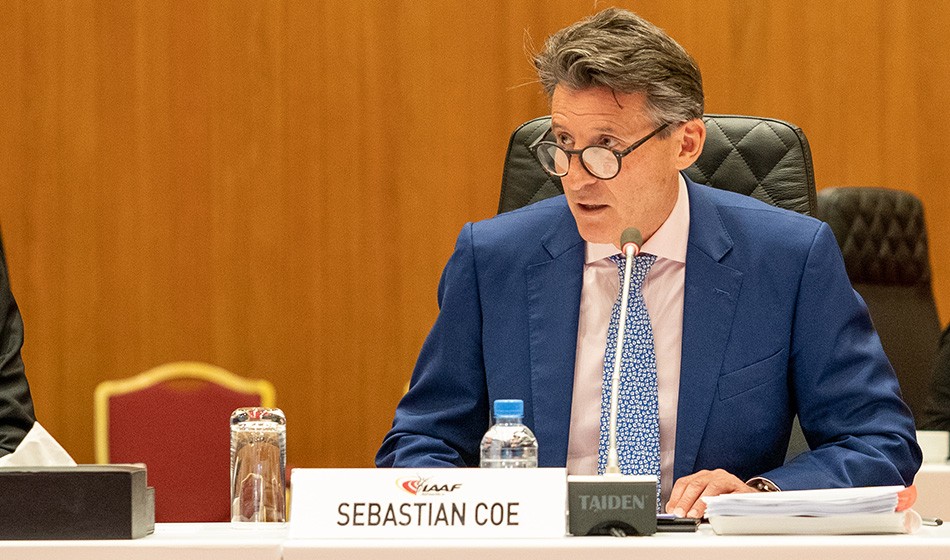 Sebastian Coe has been unanimously re-elected as the president of the International Association of Athletics Federations (IAAF).

Standing unopposed, all 203 voting members of IAAF Congress voted for the two-time Olympic 1500m champion to serve a second term after he was first elected into the role in 2015.

The election news comes two days before the start of the IAAF World Championships in Doha, which will not feature a Russia team following the continued suspension of the Russian athletics federation (RusAF) as an IAAF member.

Reporting to the 218th IAAF Council meeting in Doha, IAAF Taskforce independent chair Rune Andersen said that while some progress has been made, key issues remain outstanding that prevent RusAF’s reinstatement.

The IAAF announced that 30 athletes have been permitted to participate as authorised neutral athletes at the Doha World Championships.

Speaking at the IAAF Congress press conference, Coe said: “It has been a tough four years, there’s no point in being naive or coy about that.

“I want the next four years to be the fun bit, really. We have to grow the sport.

“We are much safer and secure now than we have ever been. But I’m not kidding myself, the reforms are in place, they have been implemented, but we do need that cultural shift as well. There is a lot of work to be done over the next four years.”

He added: “I genuinely am very pleased and proud about the way the sport has come together, the changes that we made… In hailing those achievements I also have to recognise that yes, it has meant that we have had to detour from being able to really focus as hard as I would have liked in the early years on issues around the field of play.”

Earlier news from the Athletics Integrity Unit was that United Arab Emirates’ Ahmed Al Kamali had been provisionally suspended by the IAAF disciplinary tribunal “for potential violations of the IAAF Candidacy Rules and the Integrity Code of Conduct”.

Al Kamali had been a candidate for vice president and council member positions.

Following an application by the AIU, the @iaaforg Disciplinary Tribunal has provisionally suspended Mr Ahmed Al Kamali of the UAE for potential violations of the IAAF Candidacy Rules and the Integrity Code of Conduct.
Find out more ⬇https://t.co/opInfkVlnV#AIUNews
1/2 pic.twitter.com/fzPHDlzMnC

Meanwhile, it was announced that Chinese multinational conglomerate Wanda Group is to become title partner of the Diamond League for 10 years from 2020.

“The Diamond League has been the IAAF’s shop window for a decade, thrilling fans around the world on an annual basis and we are delighted that the Wanda Diamond League will continue to showcase athletics for the next 10 years,’’ Coe said.

“As a leading marathon organiser in our fastest-growing market China, Wanda Sports Group is a perfect fit for athletics. Wanda shares our vision for the future of athletics and this partnership will be fundamental in helping our sport grow over the next decade, both in China and around the world.”