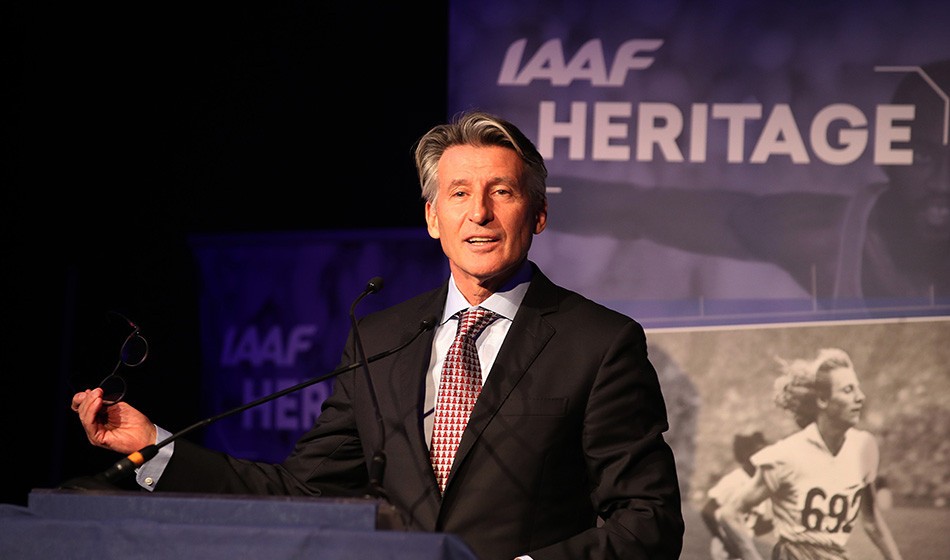 A new IAAF World Athletics Heritage Plaque award has been launched by IAAF president Sebastian Coe at a reception in Monaco.

Described as a ‘location-based recognition’, the award has been created to highlight, celebrate and link together iconic and historic athletics competitions, careers, performances, cities, venues, landmarks and culture around the world.

“On the same principle that London’s world-famous blue plaque scheme celebrates notable people who have lived and worked in the British capital, the IAAF World Athletics Heritage Plaque sets out to recognise an outstanding contribution to the worldwide history and development of athletics,” said Coe.

A plaque will be permanently and publicly displayed at a location closely associated with each recipient and can be awarded in five different categories – city, competition, legend, landmark and culture.

“This new award offers us the flexibility to honour locations across our multi-layered global sport,” added Coe, who also opened a competition to design the plaque and launched a dedicated plaque website section for the new award.

On Sunday, a dozen locations covering all six IAAF continental areas, directly associated with a dozen legends, were announced as the inaugural recipients of the IAAF World Athletics Heritage Plaque. One, for Britain’s Emil Voigt, will be displayed in Manchester.

Voigt was the last British athlete to win a long-distance running Olympic gold medal prior to Mo Farah’s double in 2012, with his success coming 104 years earlier at the first London Olympic Games. There he won the 5-mile event in 25:11.2 despite tearing muscles in his foot during his heat. More on Voigt and the other recipients can be found here.

Among those attending the reception were representatives and family members of some of the athletics legends and on stage each family presented Coe with historic artefacts from their relatives’ famous careers by donation to the IAAF Heritage Collection.

Commenting on the first plaque locations, Coe said: “There would be no point in us placing plaques on the wall of every Olympic stadium as, while they have been the scene of countless epic competitions at the pinnacle of our sport’s history, these are already well-known landmarks. Instead we are looking to highlight lesser-known locations associated with equally outstanding performances.

“Many of the stadiums and tracks which we recognise today have already vanished and these plaques will be a permanent reminder of the incredible athletics deeds which took place at those locations,” he added.

“To illustrate, Japan’s Chuhei Nambu is the only man ever to have held the world record in both horizontal jumps. He set his long jump record in 1931 in the Meiji Jingu stadium which is now long since demolished. In fact, two stadiums have since been built on that spot. This is the site where the former National Stadium, which hosted the 1964 Olympic Games, stood. That is also now gone and the Tokyo 2020 Olympic stadium is now rising in its place.

“Likewise Ferry Field, where Jesse Owens famously set four world records in 45 minutes on one afternoon in 1935, is also in transition mode. Modern athletics facilities have now been opened elsewhere in Ann Arbor as the new home of the University of Michigan Wolverines’ track and field team.

“The launch of this award is an exciting day for our sport as we begin to link together the competitions, personalities and performances worldwide which have played an important role in athletics’ rich history. It is important for our sports future that we recognise that legacy.”

More on the inaugural recipients can be found here, while the plaque criteria is here.