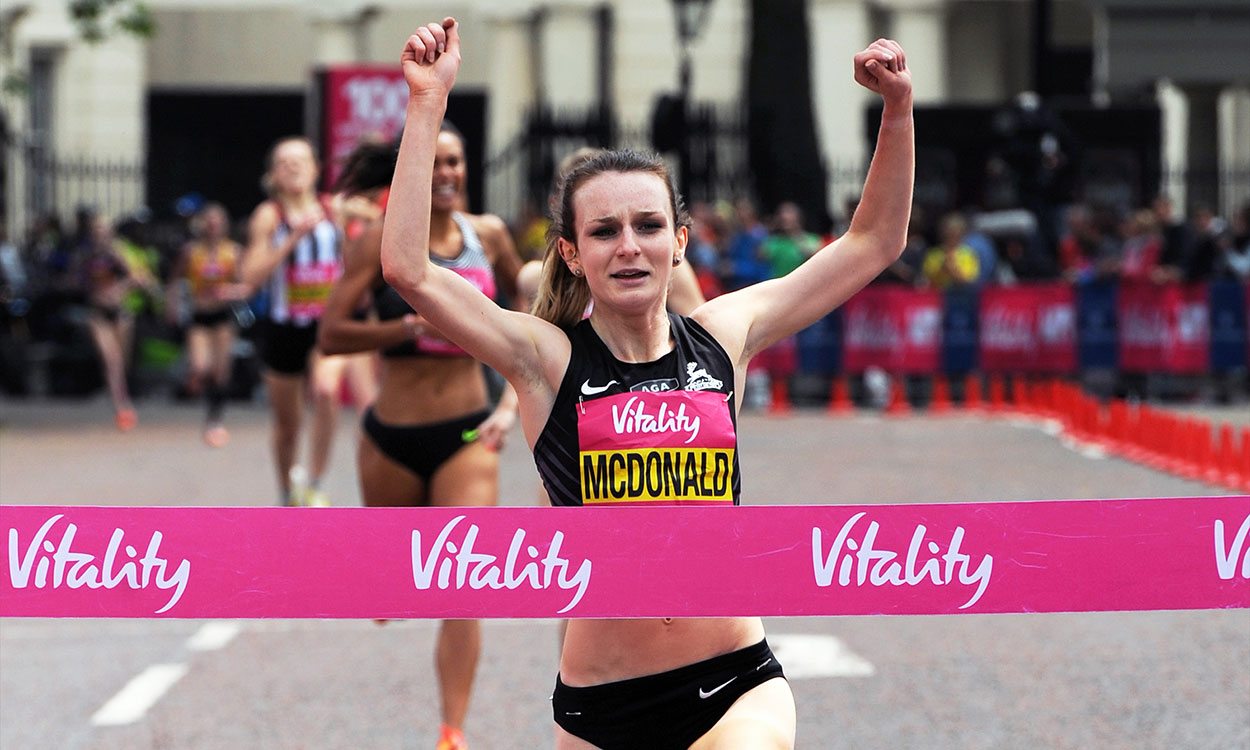 Athletes will be racing for the Bannister and Leather trophies, while Seb Coe and Jo Pavey are among those lining up for the Olympians Mile

Defending champions Nick Goolab and Sarah McDonald will return to the UK capital looking to retain their titles in the Vitality Westminster Mile on Sunday May 28.

Goolab pipped Scotland’s Andy Butchart to the line 12 months ago in a thrilling finish to the annual one-mile race around St James’s Park. With both athletes running a course record of 4:01 it was Goolab who was presented with the Sir Roger Bannister Trophy as British one-mile road race champion.

This year Butchart, who went on to finish sixth in the Olympic 5000m final in Rio, has opted to miss the mile and concentrate on defending his Vitality London 10,000 title the next day.

Tom Marshall, who was third last year, just one second behind, is also among the 2017 starters as are two GB Olympians with nearly two decades between them.

Ross Murray, 26, competed in the 1500m in front of home crowds at the London 2012 Olympics and is working his way back towards that form, while the evergreen Anthony Whiteman, 45, competed over the same distance at both the Atlanta 1996 and Sydney 2000 Olympics.

Many of Whiteman’s contemporaries from those Games will be taking part in the Olympians Mile earlier on in the day at the Vitality Westminster Mile, but the Shaftesbury Barnet Harrier is still competing at the sharp end of British athletics as well as being the world 800m record-holder for over-40s.

The elite women’s field is high quality and last year’s winner McDonald will have to beat some of the cream of British middle-distance running if she is to retain the Diane Leather Trophy.

Birchfield Harriers athlete McDonald came from behind last year to beat Jo Moultrie by two seconds in 4:38, with Adelle Tracey a fraction back in third.

Tracey is back to challenge for a medal place again, while two-time Olympian Steph Twell and 2011 world 1500m silver medallist Hannah England will also be looking to show they are in shape ahead of the London IAAF World Championships this summer.

Another athlete looking to make the GB team for London 2017 is Alison Leonard, the winner of the 2014 Westminster Mile, while other names to look out for include Emelia Gorecka, the former European junior 3000m champion, and Rosie Clarke, who became the sixth fastest British woman in history over 3000m steeplechase in California last week.

The senior championship races will be the climax of a day-long festival of road racing which includes the British Championships One Mile Road Races for junior runners and wheelchair athletes and a series of age-group races no doubt containing a few future Olympic hopefuls.

Past Olympians of various ages, genders and states of fitness will have been out in force earlier in the day in the Olympians Mile, an annual gathering of Britain’s former sporting greats from Summer and Winter Olympic Games, headed this year by the two-time Olympic 1500m champion Sebastian Coe.

Alongside the IAAF president and former mile world record-holder on the 2017 start line will be five-time Olympian Jo Pavey, who won the 2015 London 10,000 title. The oldest Olympian taking on the mile journey from The Mall to Spur Road will be 88-year-old Eric Shirley, who ran the 3000m steeplechase final at the 1956 Melbourne Games alongside Chris Brasher and John Disley, who went on to found the London Marathon.

The Vitality Westminster Mile features 30 races for all ages and abilities. There’s also a host of free family-friendly activities taking place in Green Park at the Vitality Wellness Festival. Find out more at www.vitalitywestminstermile.co.uk.