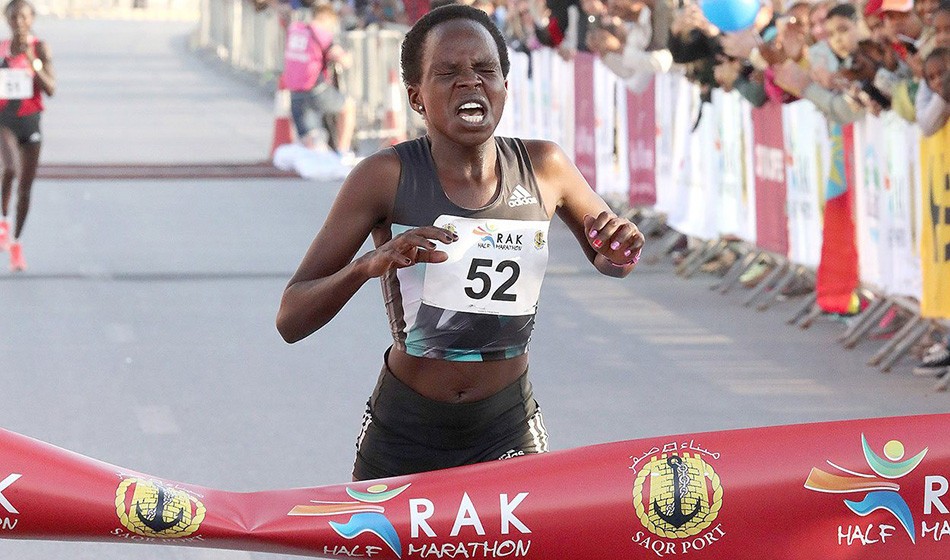 If any more motivation was needed as she returns to the scene of her world half-marathon record in 2017, Kenya’s Peres Jepchirchir will be running in Ras Al Khaimah inspired by thoughts of her 15-month-old daughter, Natalia.

The impressive performances of her countryman Eliud Kipchoge have also provided a boost of self-belief and now the 25-year-old is looking forward to getting back into action on Friday.

Jepchirchir clocked 65:06 two years ago to take three seconds off the previous world record. That global mark was improved later in 2017 to 64:51 by Jepchirchir’s compatriot Joyciline Jepkosgei in Valencia, while Fancy Chemutai was just one second off when winning last year’s race in Ras Al Khaimah in 64:52 during a memorable clash with Mary Keitany, who ran 64:55.

With Joan Chelimo having run 65:04 in Prague last April, Jepchirchir now sits fifth on the world all-time list and she’s looking for another strong run in the northernmost emirate of the United Arab Emirates after also clocking a then PB of 66:39 there in 2016.

“It will be nice if I run maybe 67 minutes or 68. That is the place I will know that I am coming back.

“It’s good to be a mother,” adds the 2016 world half-marathon champion, who is coached by her husband Davis. “I thank God because I have come back again. I will try tomorrow to run another good time to come back fully.

“I am happy now and I will run with extra effort because I know now I am going to run for my baby.”

Former WR-holder Peres Jepchirchir continues her return after the birth of her daughter at tomorrow’s @rakmarathon, where she ran 65:06 in 2017. She’s looking to test herself as she forms part of another stacked field. “I’ll try tomorrow to run a good time, to come back fully.” pic.twitter.com/LbIGxK2c1Q

Jepchirchir made her racing return with a third-place finish at the Kass International Marathon in Eldoret on November 18, clocking 2:46:15, and hopes her run in Ras Al Khaimah will prove her form as she targets another marathon in April or May.

“I pray for me too that maybe one day I am going to run a world record for the marathon because Eliud Kipchoge has inspired many,” she says. “It helps you to believe in yourself – ‘why not me?'”

Joining Jepchirchir in the Ras Al Khaimah women’s field, which features nine sub-70:00 athletes and four to have dipped under 67 minutes, will be Ethiopia’s reigning world half-marathon champion Netsanet Gudeta, whose win in Valencia last March gained her a first global gold and also improved the women’s-only half-marathon world record by 14 seconds to 66:11.

Gudeta and Teferi plan to set off at 65:00 pace and each has a personal pacemaker.

News on the elite men’s field can be found here.