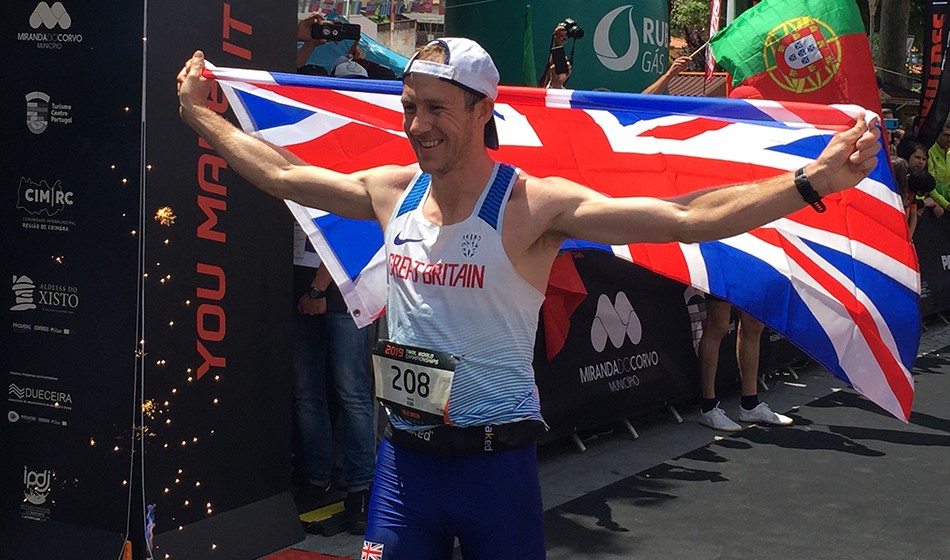 The past few years have seen Jon Albon win multiple world titles in a variety of disciplines, including obstacle course racing, skyrunning and trail running. Turns out, he’s been doing all that with fractured bones in his foot.

And while the impact of the coronavirus pandemic on this year’s sporting calendar could have been a huge blow as it denies him the immediate chance to build on those successes, the Norway-based athlete is finding positives in the fact that it has finally given him the nudge to get his injury sorted.

Albon is not one to rack up huge running mileage in training, preferring instead to cross train with lots of skiing, cycling, climbing and even some roller skating lately.

His training block ahead of claiming victory for GB at the IAU Trail World Championships in Portugal exactly a year ago came after a biggest mileage week of around 75km, for example, but now he’s hoping surgery will eventually leave him pain-free so he can rediscover his real love for running.

“The whole coronavirus thing made us sit down and think ‘what actually do we want from our lives and where do we want to be living and what are we doing?’ And then we changed things for the better,” says Albon, who with his wife Henriette packed up a van and moved from Bergen to Romsdalen (where there’s “bigger, pointier mountains and more snow”).

“Everything has kind of happened in the same time as me getting a proper scan done on my foot,” the 31-year-old adds. “I have had this big toe problem for four or five years. I finally actually had time to get it looked into and it turns out that I’ve got sesamoid bones with fractures in, that’s why I have not been able to run that much and I have been skiing so much in the winter and only running enough to get my form good. It turns out that I’ve had fractured bones in my foot for a long time.

“It has not been the best. It has really taken the love away from running for me,” he continues. “I used to love running so much whereas now I love skiing because it is pain free and I can go and do as much of it as I want. The whole corona thing has given me a chance to really look at it and think ‘how can I try and fix this up so it lasts me another 30 years?’

“I’ll get it operated on and then it will be three months of nothing, really,” explains Albon, who hopes to have surgery in the next couple of weeks. “It will be interesting to see what the outcome of the operation is. It’s kind of good for me in a way because no one is racing anyway. It would be pretty sucky to sit on the couch for three months if everyone else was still racing away.”

Before the pandemic, Albon had been planning for full skyrunning and obstacle racing seasons in 2020, as well as an eight-day trail racing event in France.

“I really pack in the races, but it’s almost fortunate that I’m not so I can try and fix myself up,” he says.

“It does seem like everything has happened within my life, that I’ve been on like a path or a wave that I’ve been following along. Now it seems like the whole world has got sick, just so I can fix up my foot.”

While Albon won’t be out running over the next few months, he will remain involved in the sport as he and Henriette have launched an online coaching business.

“It has been a cool process to actually look at my training and think about what I have done, because I have never been coached,” he says. “I’m not just taking my coach’s training ethos and then farming it out to other people, I’m actually sitting down and trying to think ‘how the hell have I got to where I am, what have I done, how have I structured it and how can I try and get other people to train like that?’ because everyone has got different time restraints and jobs and families and things, so just trying to make it work with individuals’ lifestyles.”

It is not often you are well prepared, have a good strategy and on a course that suits you…it’s even rarer for this to happen in a World Champion event. Today’s race couldn’t be described easily but for now I will stick with ‘very satisfying’.

Talking about his current group of athletes, he adds: “It is mainly people who are really dedicated and just want to get better at their sport, mainly in obstacle racing, because I don’t think many people know how to train for obstacle racing and I’ve kind of been quite successful at it.

“A lot of people think you have to go to the gym a lot to get good at obstacle racing whereas really, it’s a running sport and that’s how you get better – by becoming a runner.”

He appreciates that right now, many athletes may be struggling for motivation having no events to train for. Offering his advice, he says: “I think you need to make training just part of your lifestyle so you don’t need motivation to do it, it’s just what you do.

“I guess the best way of doing that is to make training as fun as possible. It’s not about just going out and trying to hit a certain mileage at a certain pace so you can run your marathon in a certain time, it’s about finding fun ways of going out and training. So the next day you look forward to doing it and it doesn’t seem like a big chore.”

And Albon explains how enjoyment, together with a perfect peak, is what helped him to win his world trail title over a 27.5-mile course with 2200m of climb 12 months ago.

“I think it was the first time that I really tried to train specifically for one race,” he says. “I was actually surprised that I managed it. In the weeks before I thought I had good form but I didn’t really want to tell anyone because I didn’t want to jinx it.

“I’m pretty proud of myself to be able to get into shape and then go to the race and actually really execute it as I wanted to and then win. It was a really fun experience and it’s probably going to be one of the days I remember for a long time.”

There was no trail world championships planned for 2020, with 2021 set to see the first combined world trail and mountain running event, so that is on Albon’s radar for next year as well as potentially something even longer.

“The thought of running too far has always given me the shivers because it doesn’t sound very nice,” he says. “The idea of UTMB (Ultra-Trail du Mont-Blanc) is like, it’s so far for my foot! Whereas if I didn’t have the foot problem, I’m sure that would be a really fun challenge to train towards. I’d have to qualify for it so it would mean some other big races to qualify.”

But first, he needs to fix those fractures.

“I’ve always said how you deal with injury is what kind of defines you as an athlete or even just as a human,” he says. “I’m going to try and deal with it in the best possible way.

“There are a lot of different things which make up a good athlete and how you deal with injury is one of the biggest ones.”