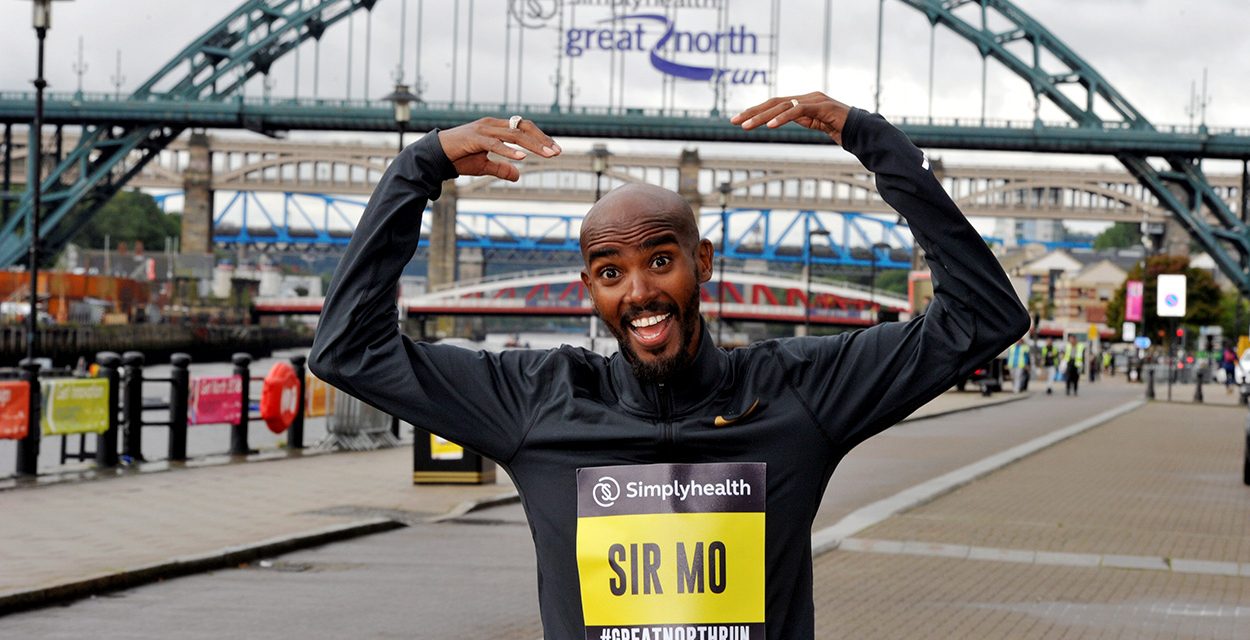 British runner goes for Simplyhealth Great North Run title No.5 on Sunday in an event that acts as a stepping stone toward his next marathon

When Mo Farah raced to four consecutive Great North Run victories from 2014-17 he was spurred on by the reward of an end-of-season rest and plenty of unhealthy food. “I’m usually thinking ‘Great North Run. Finish. Sticky toffee pudding!’” he smiles.

This time, though, the half-marathon has fallen partway through his build-up to a major target – the Bank of America Chicago Marathon on October 7. “So this time, after racing on Sunday, I’m going back to Flagstaff, Arizona, for three weeks more training,” he says.

“I’ve never gone into this race having this amount of training (in my legs) and with another race (Chicago) still to come,” he adds. “It’s nice to be able to test myself and after the race myself and Gary (Lough, his coach) will talk about how things went. We know Chicago won’t be a walk in the park.”

Farah set a UK record of 2:06:21 when finishing third in the Virgin Money London Marathon in April, so in Chicago he will be looking to run faster still against a field that includes his old training partner and 2017 Chicago winner Galen Rupp.

The event will have pacemakers setting a fast tempo but Farah is more motivated by the idea of winning. Talking about his possible result, he says: “I think position is the most important for me. It’s nice to run decent times and obviously having British records is a big deal and the next target will be the European record (Sondre Nordstad Moen’s 2:05:48) and I’ll see what I can do. But to win a major marathon, that’s what stands out.”

His half-marathon on Sunday will be a good test as he is up against Daniel Wanjiru, the 2017 London Marathon winner from Kenya; Jake Robertson, the New Zealander who finished runner-up to Farah on Tyneside 12 months ago; Michael Shelley, the 2014 and 2018 Commonwealth marathon champion from Australia; plus Brits Andy Vernon and Jonny Mellor.

“Jake’s an aggressive runner and often pushes,” says Farah, as tries to nail a fifth consecutive Great North Run victory. “Wanjiru is also a great athlete to have won in London, so I respect the guys and look forward to racing them.”

On his choice to run on Tyneside, Farah says: “I ran the mile and two miles a few times here in the CityGames and I promised Brendan Foster I’d run one day in the big boys’ race. So doing this over the last four years has been incredible. It’s nice to be able to run at home for me. It feels like home.”

Farah also says he loves the support from the spectators on Tyneside. “It’s incredible and that’s why I like running here. The crowd on South Shields at the finish is incredible.

“When I raced Haile Gebrselassie and Kenenisa Bekele in 2013 in the final mile Kenenisa put the hammer down. In the last few hundred metres the crowd helped me close the gap I nearly caught him but not quite.”

In recent weeks Farah has watched the Diamond League action and European Championships while he’s been at his training camp. He has no regrets about ending his track career and is relishing his life on the roads. “This is a new life for me. With the marathons it’s totally different, it’s a new challenge and I’m enjoying every day of it.”

Beyond Chicago, a possible tilt at the marathon at the IAAF World Championships in Doha next year beckons, too.

The women’s race on Sunday also has strong domestic interest with marathoners Lily Partridge, Charlie Purdue and Alyson Dixon in the field. The fight for first place, however, is likely to be between two Kenyans – the 2018 London Marathon winner Vivian Cheruiyot and world half-marathon record-holder Joyciline Jepkosgei.

In the wheelchair race, meanwhile, David Weir is going for his sixth victory in the Great North Run as he prepares for the TCS New York City Marathon in November. He faces fellow Brits Simon Lawson and JohnBoy Smith – minor medallists at the Commonwealth Games in April.