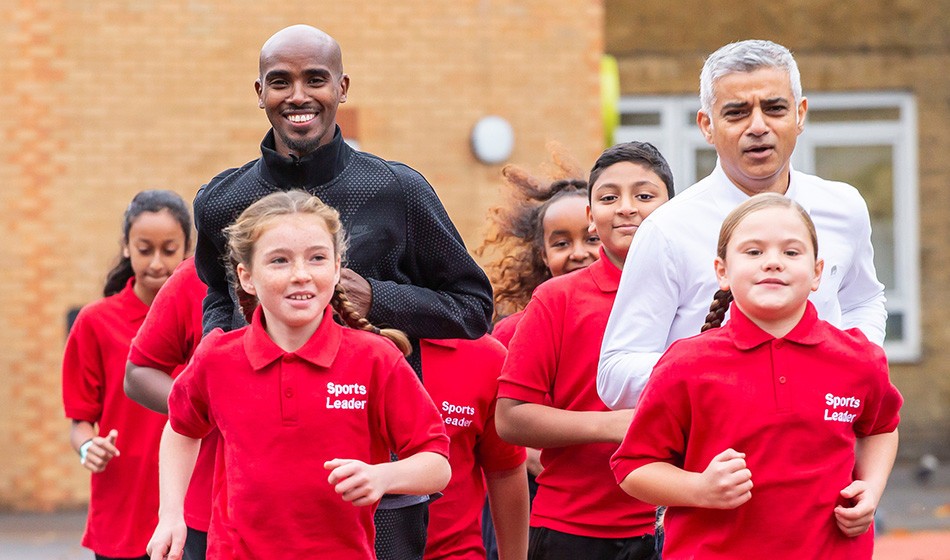 Mo Farah switched the marathon for the mile in London on Monday as he helped to launch a campaign encouraging primary schools across all 32 London boroughs to take up health and fitness initiative The Daily Mile.

Fresh from his European record-breaking run to win the Chicago Marathon, Farah returned to the track – albeit the one found in Cubitt Town Junior School’s playground – and faced new opponents in the form of excited schoolchildren and London Mayor Sadiq Khan to mark his home city becoming the world’s first ‘Daily Mile Capital City’.

The Daily Mile initiative was founded by Elaine Wyllie in 2012 when she was headteacher of a primary school in Scotland. Concerned about the lack of physical fitness displayed by the children, Wyllie had the simple aim of getting her pupils moving every day to improve their overall fitness and wellbeing.

Now London Marathon Events Ltd is working in partnership with The Daily Mile Foundation and the Mayor of London to encourage all primary schools in London to take up the initiative.

“The Daily Mile is a brilliant and easy way to get kids moving and keeping healthy,” said Farah. “I’m a dad of four and I encourage my kids to be active every day.

“It would be fantastic to see every primary school in London signing up to do The Daily Mile.”

The Daily Mile involves classes heading outside to jog or run around the school grounds, at whatever pace suits them best.

Who knows – it could even introduce potential running stars of the future to the sport.

“I was lucky to have people in my life who recognised my talent,” added Farah. “There’s kids out there who will have as good talent as me, even better, but if you don’t start early on, it’s harder later on because there can be distractions.

“It’s important that kids can make that choice.”

Wyllie said: “It is wonderful that London wants to become the first Capital City to back the Daily Mile across all its schools. Already thousands of children across the capital and the UK are establishing healthy fitness habits taking part in The Daily Mile.

“The support of the Mayor and Sir Mo Farah gives the campaign new urgency and reach to tackle childhood obesity in the capital and I am thrilled that they are backing the campaign to get kids fit for life across London.”

Farah’s early athletics career included success at the Mini London Marathon and he has since gone on to add a third-place finish in the main iconic event to his 10 global track gold medals.

“If we can get more kids active, we know that it is good for their physical and mental health. Exercise does amazing things. The Daily Mile, it’s mental health and physical health – it’s more than just exercise.

“The Daily Mile has been proved to reduce obesity statistics and to help confidence and mental health and wellbeing. So we are delighted to be partnering with The Daily Mile Foundation.

“We want to get schools in all 32 London boroughs adopting it, we want it to be part of everyday life for our school kids.

“It couldn’t be better as a foundation to start this off with the Mayor and Mo today.”