After marathon debut, Dewi Griffiths feels he can go faster in future 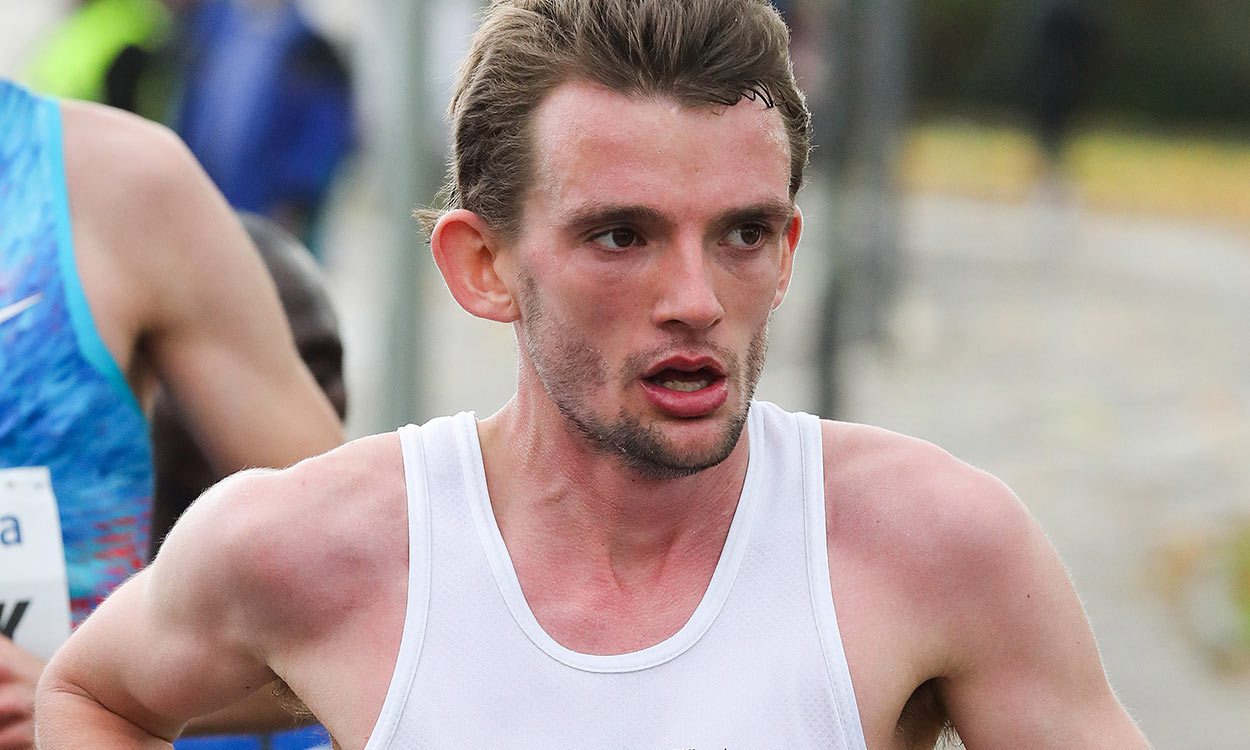 Welshman reflects on his run in Frankfurt, as he clocks 2:09:49 despite hamstring cramps

Dewi Griffiths feels he could have run even quicker in the Frankfurt Marathon on Sunday if he hadn’t suffered from hamstring cramps in the closing kilometres.

In his debut over the distance, the 26-year-old clocked 2:09:49 to go No.15 on the UK all-time rankings and No.2 on the Welsh lists behind Steve Jones but he believes a 2:08 performance was possible.

“You probably noticed from my splits that I was slowing down toward the end,” he tells AW. “It was due to my hamstrings cramping.

“I felt really good during the race otherwise. It was pretty windy in the early stages but at 28km we turned and had a tailwind for the next 10km or so.

“I was running with the German and Polish guys and we were working together and then, without trying, I left them. I thought ‘this is not meant to be this easy’.

“But after 30km or so I felt my hamstring twitch and it got worse from then on. At one stage I was worried I might end up dropping out but I managed to hold it together.

“I’m really pleased, though, as I got what I got out of my body and it points to me being able to run faster in future.”

For Griffiths, his time was not a huge surprise either. “I felt I was running well enough to run sub-2:10, especially after Cardiff,” he says, on the 61:33 half-marathon he ran at the start of October.

His next marathon will not be at the Commonwealth Games in April, though. Instead, he wants to run the 10,000m on Australia’s Gold Coast.

“At the last Commonwealths in Glasgow I got injured the week before my 10,000m,” the Swansea Harrier explains. “I had a stress fracture and basically ended up running the race with a broken foot. So I’d like to go to the Commonwealth Games next year and run the 10,000m to make amends for that.”

Griffiths’ performance in Germany also put him No.1 on the UK rankings for 2017 ahead of Callum Hawkins and was widely applauded, largely due to him being a typical hard-working, down-to-earth distance runner who has been rewarded for years of tough training.

He has also stuck with the same coach, Kevin Evans, for the past dozen years. “Why change if things are going well?” says Griffiths.

Part of Evans’ coaching philosophy has led to Griffiths serving his apprenticeship on the cross-country circuit – and the athlete has no intention of abandoning the mud just yet either. “I’ve not ruled out racing in the Euro Trials in Liverpool at the end of November,” he says, “but I’ll see how my body recovers.”

He is also keen to win what would be his seventh Welsh cross-country title on home turf in Swansea in February.

With Hawkins finishing fourth in the World Championships in London in August, Mo Farah returning to the distance in April and Jonny Mellor also enjoying a good breakthrough in Berlin earlier this autumn, the future looks bright for British marathon running.

“It would be nice to get back to the level we were at in the 1980s,” adds Griffiths.

» Read more in the November 2 edition of AW magazine