The managers behind the athletes 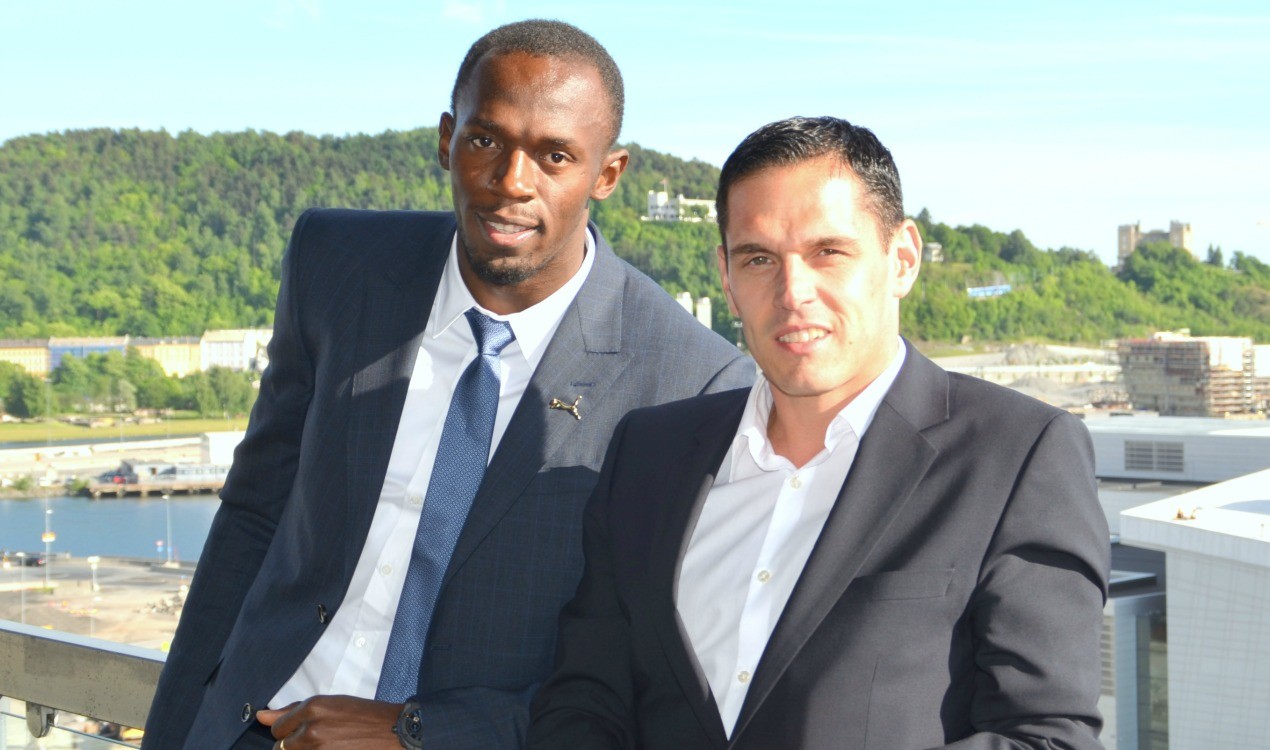 Take yourself back to the London Olympics or maybe last year’s IAAF World Championships in Moscow and many will remember the victories of Mo Farah and Usain Bolt. The cover stars of the games revelled in doing what they do best, collecting record times and winning medals.

During their victory laps they could often be seen going to the stands to celebrate with their coaches. But there would also be someone else on the coach’s side whom the athlete probably hugged just as enthusiastically.

They are not a family member or a childhood friend, yet they are likely to have been with the athlete from the point when their potential was first noticed, to the moment they achieved their lifelong ambition and made it on to the podium. That person is the athlete manager.

Often avoiding the attention of the media, the athlete manager is, to many casual observers, an almost non-existent figure in the athletics world. Yet without them there would be no athletes at the big events and no world-class competitions for the athletes to be in. Without them we wouldn’t have had Usain Bolt at the London Anniversary Games, Wilson Kipsang probably wouldn’t have set his marathon world record in Berlin last year and Haile Gebrselassie almost certainly wouldn’t have been pacemaking this year’s Virgin Money London Marathon.

Not all of them planned to be an athlete manager. “I never actually intended to become a manager. I was a decathlete, not very good but passionate about the sport,” Paul Doyle says. An American manager who represents combined events couple Ashton Eaton and Brianne Thieson-Eaton, Doyle looks after about 40 athletes.

“I had started coaching at the top level and had about eight or nine top calibre athletes and one of them was Peter Cochran, an Irish hurdler from Yale University, and we had talked to a number of managers about looking after him, but he was only a 13.86 guy so not many managers were interested in him. To fill a void I said: ‘Well, I’ll be your manager if nobody else is willing to do it’ and that was the start of it for me.”

Cochrane ended up running 13.3 that year, making him the third fastest European athlete at the time. He was soon snapped up by a more prestigious manager and Doyle thought he was done, but the next year came and more athletes he’d been coaching started to come to him asking him to manage them.

At that point Doyle said he chose to ‘dive’ into management, as he remembers: “At that stage in 2000 I decided that this might be a good way to travel with the athletes I coached if I became a manager, so I decided to dive into the management thing and then two years later I had about 30 athletes. I was starting to make coaching the hobby and manager the full-time job.”

“Where do I run? Where do I train? Where do I go when I am injured? What do I eat? Can somebody ffind a sponsor for me? The athletes came to ask me for help and so I decided one of my jobs would be as an athlete manager” – JOS HERMENS

Long before Doyle was getting asked to manage his athletes, Jos Hermens, now manager of Global Sports and one of the first athlete managers, was getting asked all the same questions by athletes: “Where do I run? Where do I train? Where do I go when I am injured? What do I eat? Can somebody find a sponsor?” There were no managers in those days.

Hermens adds: “The athletes came to ask me for help and so I decided one of my jobs would be as an athlete manager.”

The rest is history and Hermens now looks after many of the world’s top distance stars including Kenenisa Bekele and Gebrselassie and organises 15 road races in a range of places from ‘India to Germany’.

Organising competitions is not an uncommon thing for agents to do. These roles on the side are essentially a hobby and with such a hectic schedule for a manager it’s no surprise. While many have tried to define the role they play, the truth is that with such a range of jobs to do, simplifying their role would be impossible.

According to Hermens the requirements of an athletics manager differ massively from most other sports, especially football. “Our sport is totally different to soccer – the players get their boots cleaned, their clothes washed. When they are 16-years-old they are already totally spoiled.

“The managers, they only negotiate contracts! In our sport, we do everything, we are coach, we are the planner, we are educator, we are everything for our athletes and for small amounts of money in most cases. That’s why most of the time I call myself manager coach, we are doing the coaching and planning much more than in other sports, other sports where you have clubs taking care of everything.”

Even extending the title of the role to manager coach seems to be simplifying a profession that contains such a mix between admin and personal relations with the athletes. With such a jumble in the understanding of what they do Doyle believes that his profession requires a name change: “Management is the wrong name”.

Doyle continues: “So much pops up in the business and it keeps you on your toes. We do boyfriend/girlfriend counselling, all the personal stuff. There’s nothing that’s not included in our job descriptions.”

One of the main jobs that Doyle forgot to mention is the responsibility to secure the athlete that all-important sponsorship. One athlete who knows all about the importance of sponsorship is Leo Manzano, 2012 Olympic 1500m silver medallist, an athlete who is now without sponsorship and a manager after his recent split from PACE Sports Management.

In a recent interview he told me about the support the company had provided him when he was starting out, as well as with gaining shoe sponsorship: “When I was up and coming I was very new to the track world so one thing PACE would provide me with was a knowledge of where I needed to go, what races I needed to get into, whether it was to prepare for a world championship year or a better race, so they pretty much guided me along the way throughout the years.

“Usually they go and find an official sponsor for you. So for us it’s going to be an athletics company, whether it’s Nike, Adidas, or Reebok, whoever it may be of the world. It’s the first thing you need as it’s going to be like a salary, for you to live and train on.”

“You want to be there to help and you don’t know what fires are going to pop up. There’s always something going on that you’ve got to try and manage” – CHRIS LAYNE

As for how he was spotted by his management company, Manzano said that PACE and chief manager Ricky Simms – pictured with Bolt above – had actively sought him out while he was at college, something that is common practice in US track and field.

“With PACE, Ricky came out right after my college year in 2008, when I was looking at various people and various marketing agencies and he visited me and it just kind of seemed to work. Also it wasn’t just me, it was also my coaches here in the US; at the time it’s kind of like you’re upcoming; you’re trying to figure everything out, so your coach is also there to help you with the decision, so I kind of fell into Ricky’s hands as well.”

Once they have the athletes on board the next step for the management team is to build up the relationship. For Chris Layne, manager of Total Sports US, the intensity of the relationship between him and his athletes varies from person to person: “It’s just like anything, there are varying degrees of relationships and it’s just that some athletes lean more on their coach and some lean more on their manager. One thing is if you’ve got a new relationship with a client it sometimes takes a little time to knit in how you’re going to work together.

“This isn’t just a product where you buy a phone, you turn it on and the thing operates. You get to know your athletes over a period of time and spending time with them allows you to grow and develop your relationship with them and sometimes that takes a little while, it just depends on the individual.”

Fast forward past this process and towards the major championships like the world championships and this is where the manager’s job starts to hot up, whether it’s organising where their runners train, or dealing with a sudden change in an athlete’s situation, such as appealing a disqualification or finding a physio to deal with an injury, the manager needs to stay on his toes.

Despite the increased intensity required at such events, Layne says he doesn’t feel under pressure at any point: “I certainly don’t look at it as pressure. I love what I do. You want to be there to help and you don’t know what fires are going to pop up. There’s always something going on that you’ve got to try and manage.”

Alongside all the changes and stresses that arise there is the pleasure of finally getting to revel in the successes of their stars. Despite the varying level of success that the athletes may achieve on paper, Layne says that he enjoys each achievement equally: “For me personally I look at the athletes and for some of them making their first world championship means as much as picking up a medal and for me seeing those successes on any end of the spectrum are exciting and enjoyable.”

» This is a version of a four-page feature first published in the May 22 issue of Athletics Weekly, which is available here or digitally here