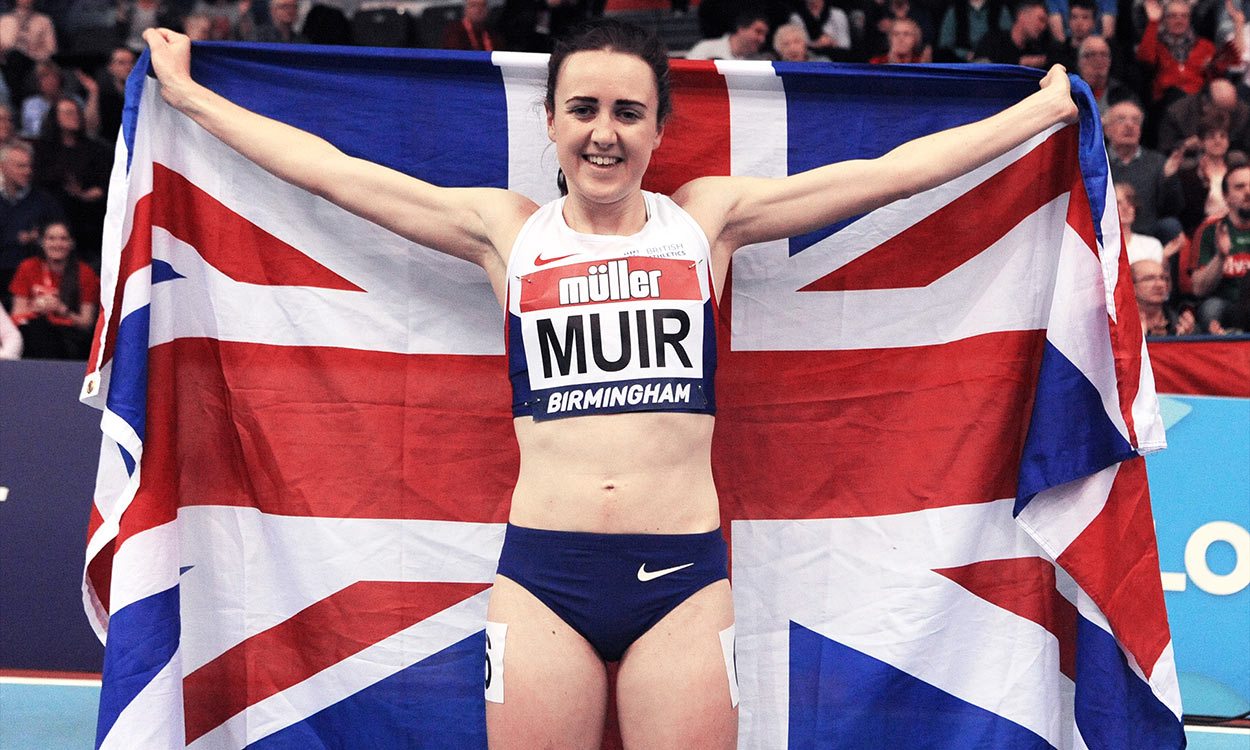 Given that she’s studying for a veterinary degree alongside her life as a world-class athlete, looking at scan results is something to which Laura Muir is very much accustomed. They just don’t usually tend to be her own.

So, when she received the findings of a closer inspection of her left foot last month, the doctor didn’t need to say anything. The patient knew immediately what was wrong.

“I thought ‘there’s a line there and that line shouldn’t be there’,” she says.

That “line” was a stress fracture. The good news was that the injury was already in the process of healing when it was discovered. The bad news was that it meant disruption to training for one of the biggest occasions of Muir’s rapidly developing athletics career.

It was the first real setback during a year which had seen very little go wrong for the young Scot. European and British records have flowed from her lucky spikes since January, not to mention the small matter of her becoming European indoor champion in both the 1500m and 3000m.

Typically, Muir attacked her injury challenge with positivity and hard work. Given the performances she has produced since returning to action at the beginning of the month, the approach appears to have well and truly paid off.

She is still fully fixed on tackling the 1500m/5000m double at the IAAF World Championships in London but the 24-year-old admits there was a moment when she wondered if all she had been preparing for might be about to get taken away.

“I stayed very positive throughout the whole process and I knew it was very important that I had to keep that kind of mindset,” she says. “I worked hard in the pool to keep my fitness as high as I could but, yeah, I knew something wasn’t quite right.

“I was kind of hoping it was just a stress response or something but when the doctor showed me the scans…I’ve seen scans before so he didn’t have to say anything. I’m probably too knowledgeable, which isn’t great, so before he’d even said anything I could see there was something wrong.”

There was, however, something of a silver lining to the injury cloud.

“I think we were just lucky that we got it in time and it puts everything into perspective – how appreciative I was to get back running and how much I love the sport,” adds Muir.

“You take it for granted, I think, until you have something taken away from you. Most mornings you’d rock up, go for a run and not think about it but, when I got back from the injury, I was just so happy to be back running.

“It could be chucking it down with rain, or Andy (Muir’s coach, Andy Young) could give me the most horrible session and I wouldn’t care because ‘you know what? I’m running and I’m so happy to be running’.

“It almost made you commit to it that much more because you’re so appreciative of being back on your feet and running well. I think it makes you change the mindset a little bit.”

The real moment of truth came when Muir stepped back on the track to race again – over 800m at the Diamond League meeting in Lausanne.

Such an arena is exactly where she likes to be and where she feels comfortable but still there were questions in her mind. Yet, the answers were emphatic. Muir promptly went out and ran under two minutes over the distance for the first time in her life, clocking 1:58.69.

“Going into Lausanne, I was a bit apprehensive,” she admits. “That was the first time I’d worn my race spikes in about five or six weeks – I’d been wearing a more supportive shoe when I came back. It was a very good field and I didn’t know how I was going to fare at a distance which is not really my primary event.

“But I was delighted to go out there and run 1:58. I’d have been happy running around two minutes so, after that, I thought ‘right, ok we can come back from this’. It was a great first run back.” 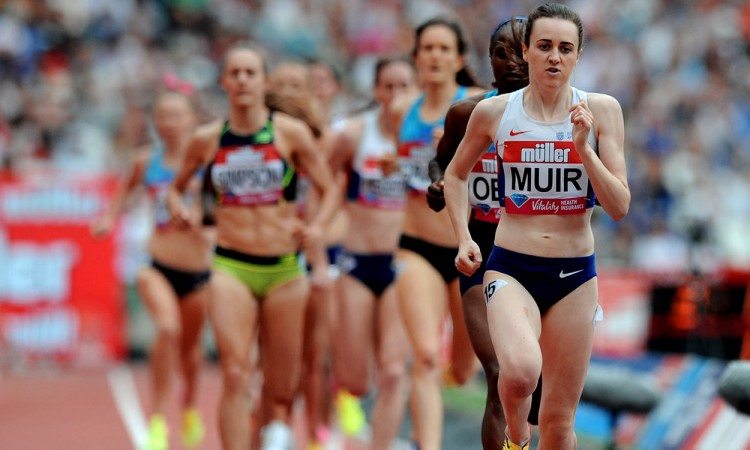 Muir followed it up with a Scottish record for the mile at the Müller Anniversary Games, just missing Zola Budd’s long-standing British mark, plus victory in a crowded and chaotic 1500m race in Padova before completing her pre-London race schedule with an outdoor personal best of 8:30.64 in coming third over 3000m at the Monaco Diamond League.

She then went to Font Romeu for a final training stint under the watchful eye of Young. Both Muir and her coach were questioned about the tactics employed the last time she contested a global 1500m final, at last summer’s Rio Olympics – the strategy of going boldly all out for gold seeing her ultimately finish seventh, when lesser athletes made their way to the podium.

It was a ploy which divided opinion and eyebrows were initially raised too when it was announced she would be doubling up at the World Championships. Muir, however, has complete faith in a sporting partnership which has developed significantly over time.

“I think people will always give their bit of information but, for me and Andy, we are the only two people who really know exactly where I’m at and what I’m capable of, and what I should and shouldn’t be doing,” she smiles.

“I’m very lucky in that Andy is very knowledgeable, he looks at a lot of very different races and analyses a lot of different things. He’s a very smart man and we’ll have a chat about what we’re going to do come London. I trust him 100%. I think you’ve just got to.

“If you start doubting your coach then you’re not going to commit 100 per cent so I trust him fully and he puts all the faith and belief in me, so it works well.

That will come in particularly handy for the challenges which lie ahead – and it’s work which Muir will embrace rather than shy away from. No longer is she an athlete trying to find her way – this year in particular her approach and form has marked her out as a force to be reckoned with.

“I’m certainly a lot more confident as a runner,” she adds. “My confidence has improved every year as my ability has improved but I think other athletes’ perception of me is changing a lot.

“I think before they didn’t really know who I was or what to expect whereas now they know ‘oh, we’ve got a tough race on our hands’.

“After last year, we went into Belgrade (for the European Indoor Championships) and we thought ‘right, we need to make a statement here. We need to put the foot down and show what we’re capable of’. I think we did that in good style and it was a big confidence boost, as well as being really good preparation for London with doing the two events.”

Multi-tasking is something Muir is very much used to, what with balancing her sporting career with an intensive degree course. She may have had recent months to focus on her athletics yet she hasn’t completely cut herself off from her studies.

“The 5000m final (in London) is on the Sunday (August 13) and then I return to vet school the following Monday (August 21) so I’ve got seven days from when I finish the champs to when I start back.

“I had the summer to focus on the running but, coming back on the plane from Padova I was reading notes. I’m really scared of going back and not remembering anything so I want to try and keep up to date with a few things.”

She adds: “When I did have my niggle – although I still didn’t have much spare time because I was in the pool a lot and physio a lot – it was nice to have the veterinary stuff there. I could do a few bits and pieces with that and I read up on a few different things to keep my mind busy.”

With so much going on all at once, it might be easy for Muir almost to forget the scale of what she is about to do and all that she has achieved. She is very much aware, though, of the opportunities she has created for herself – and will make sure she takes a moment to let it all sink in. Just not quite yet, though.

“I think at the end of the season I do,” she says when asked if she allows any time to reflect. “At the moment I’m focusing on London but, certainly when I had the niggle, it made me appreciate how lucky I am to simply be running injury-free, let alone performing at a world-class level.

All being well, there may even be more for Muir to appreciate by the time she heads back to university.

» This feature was first published in the July 27 edition of AW magazine. For further interviews, news, event-by-event previews and more, see the August 3 bumper edition