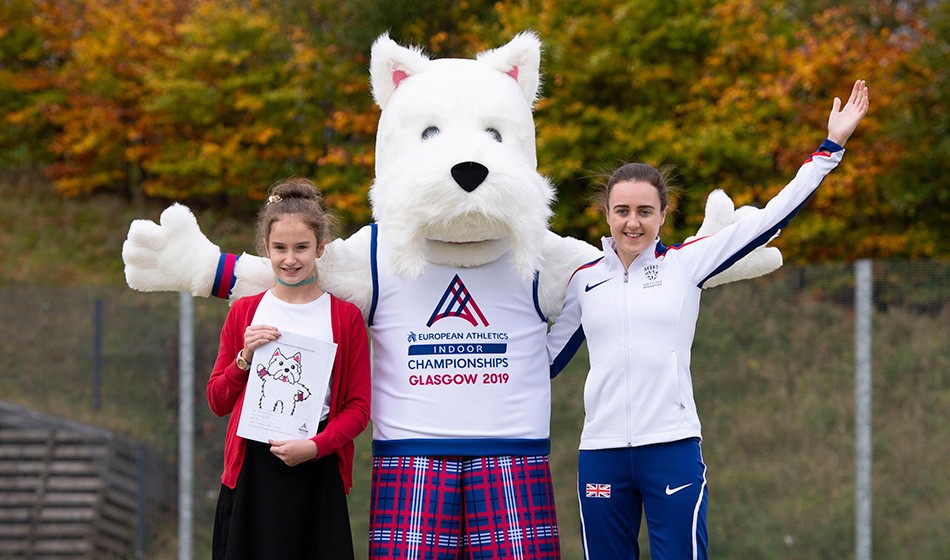 The pair surprised his creator – Crookston Castle Primary School pupil Rachael Joss – with a visit as she was named winner of a mascot design competition for local schools.

Muir helped a panel to select the winning design and felt the Scottie dog was best suited to fulfil the role.

“It was an absolute pleasure to be involved in the selection process and help chose the winning mascot design,” said the double European indoor champion.

“Scottee was a favourite from the very start and Rachael’s design was amazing. To see him today is fantastic. Rachael should be very proud to have played a big part!”

Next year’s event takes place from March 1-3 and after a summer which included winning European 1500m gold and the Diamond League title, Muir now has her sights set on defending either her 1500m or 3000m crown on home soil.

We have a mascot!!
And it's a dog of course 😊🐶@Glasgow2019 #ScotteetheScottie https://t.co/NdqOsaA2SR

Cherry Alexander, major events director at British Athletics and sport director for Glasgow 2019, said: “The unveiling of the brilliant Scottee the Scottie dog as the official mascot for Glasgow 2019 is another exciting milestone moment as we move closer to the championships next March.

“Engaging youngsters in the local community in the lead-in to a championship is incredibly important, so to have received over 700 entries has been amazing to see, with Rachael’s design a very worthy and appropriate victor and a character sure to go down very well with the Glasgow crowd.”

» Tickets are on sale at glasgow2019athletics.com