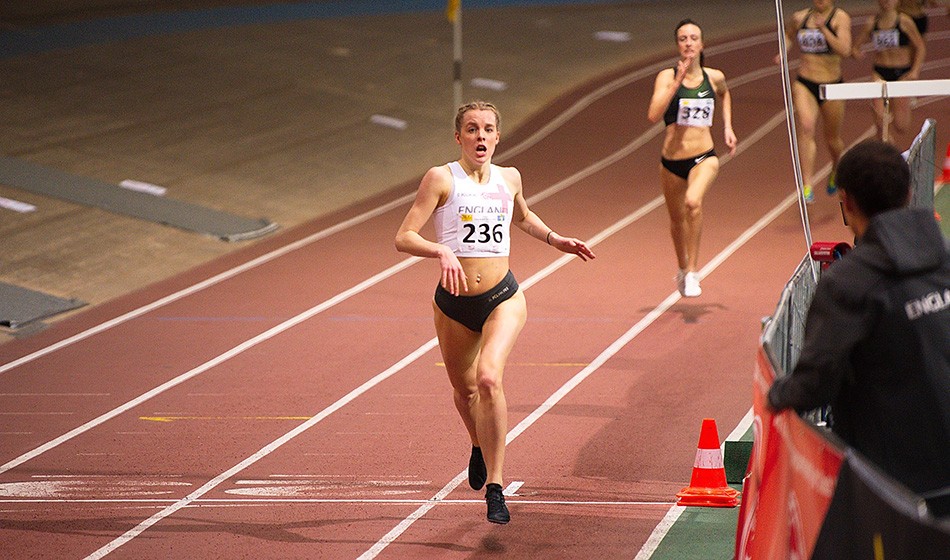 Like a ‘Super Saturday’ but for the juniors is how Keely Hodgkinson describes the first day of this month as she, together with Tom Keen and Lewis Byng, rewrote the under-20 record books.

Hodgkinson may be aged just 17 but last year’s European under-20 800m bronze medallist speaks and races with a maturity well beyond her years. Her time of 2:01.16 clocked when winning at the Vienna Indoor Classic is clearly still sinking in but it wasn’t unexpected and, after seeing Keen blast to a big British under-20 record in the 1500m, Hodgkinson was inspired to follow suit.

“I was a bit shocked. I knew I was in good shape but I didn’t know whether it would come out or not!” says Hodgkinson, who broke Kirsty Wade’s British indoor under-20 800m record of 2:02.88 set in 1981 and also improved Aníta Hinriksdóttir’s European indoor mark for the age group by four tenths of a second.

“It took me so long to knock a second off my time last year and then, in my second race of the season, I go and knock two-and-a-half off.

“I had no idea what the records were, I didn’t know what the British record was or the European. I was just going to see where I was at and run as quick as I could.”

The fact that Hodgkinson was feeling under the weather in the lead-up to the race also makes her performance even more impressive.

“I had woken up on the Friday and Saturday with a bit of a cold and I didn’t feel great,” recalls Hodgkinson, who won the European under-18 title in 2018. “The pacemaker went off really quickly, so I stuck back and when I saw the clock at 600m, I was like ‘I’m on for a really good time here!’ So I kicked my hardest to see what came out.

“It was like a ‘Super Saturday’ but for the juniors,” adds the Leigh Harriers athlete, with Byng also having broken a British indoor under-20 record on that day with a 19.18m shot put throw in Loughborough.

“Tom ran before I did and it motivated me because I wasn’t feeling too great and I was like ‘I’ve just watched Tom run this really quick time and he looked so strong’. I thought I may as well go for it and try and do my best.”

After her run she was further inspired by the performances of her fellow Britons back home.

“Jemma Reekie, that was insane!” she says, referring to Reekie’s British indoor 800m record of 1:57.91 run in Glasgow that same day. “I saw it online and I was like ‘oh my god, what on earth has just happened – what is going on today?!’

“I saw it all over Twitter – her, Laura Muir and Adelle Tracey just knock out these insane times first race, it’s so good.”

“I’m not far off the qualifying time so I’m going to try and get that and see what happens,” she says.

In between seasons she will be heading out on a training camp to Potchefstroom with her coach Trevor Painter, who she teamed up with last year.

With Painter being the husband and coach of Jenny Meadows, Hodgkinson also has the benefit of advice from a world 800m medallist.

“They are so helpful because they have been there and done it before,” she says. “They know what they are doing, everything is organised and it is a bit more of a professional environment.

“They knew I could run the time,” she adds of her record in Vienna. “I think it was just a case of me believing it, so they weren’t really that surprised!”

» This interview was part of a three-page feature highlighting the record-breaking performances by Keely Hodgkinson, Tom Keen (click here to read) and Lewis Byng (click here to read) first published in the February 13 edition of AW magazine, which is available to order in print here or read digitally here