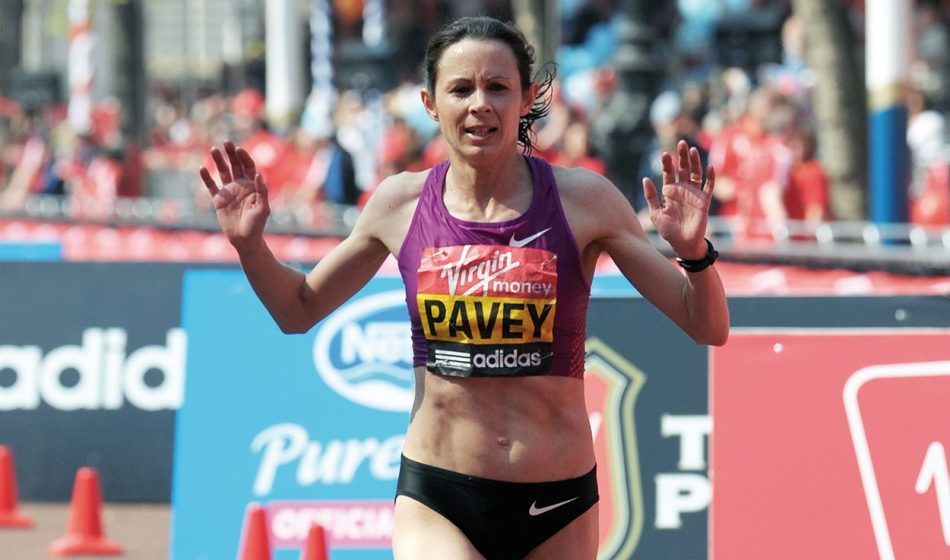 When it comes to running experience, Jo Pavey certainly has her fair share. The 43-year-old has so far represented Great Britain at five Olympics, from Sydney 2000 through to last year’s Rio Games, and sometimes when she competes in her club colours her Exeter Harriers vest is older than some of her competitors.

Yet she continues to run and is always learning. That, together with her drive to set new goals, means she doesn’t intend to stop any time soon. In fact, racing the Virgin Money London Marathon is next on the list and that offers a chance to achieve another ambition — to qualify for the 26.2-mile event at the IAAF World Championships in London this summer.

“At this stage now I just feel like it’s so exciting to have a fresh new challenge,” she says. “I’d like to explore what I can try and achieve at the marathon. I’ve only sort of dabbled in it a little bit, it’s an event where there is still a possibility of getting a personal best, which I would like to try and do.”

Pavey made her marathon debut in London in 2011 (pictured below), clocking her current PB of 2:28:24, before running the New York City Marathon later that year.

In order to qualify for this year’s World Championships, which would be her sixth edition, Pavey would need to achieve the necessary time of 2:36:00, as well as finish as one of the top two British athletes around the streets of the UK capital on April 23.

“That would be an exciting thing to try and do but obviously I haven’t yet achieved it,” Pavey says modestly on the thought of earning another GB vest. “I don’t really like talking about things I haven’t done yet!

“I know it will be tough, there are so many good girls in the country. If I was to achieve gaining a place, I don’t want to be presumptuous, but that would mean I would have represented the country at 1500m, 5000m, 10,000m and the marathon at world level.” 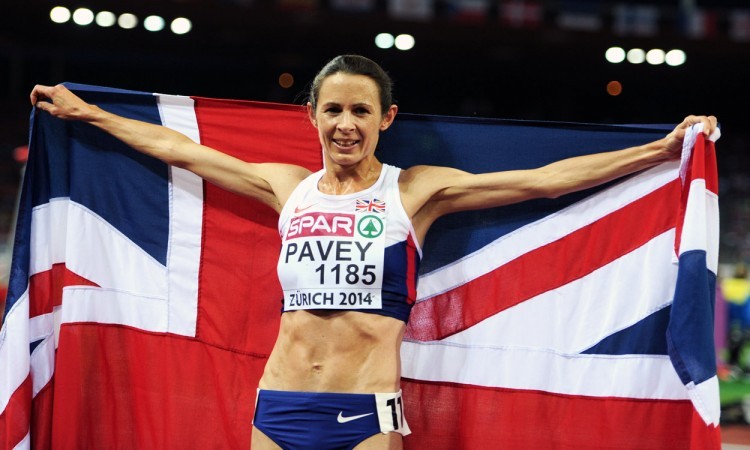 “I just feel that at this stage of my career it has boosted my motivation so much to have this personal challenge, I’m really excited about it,” Pavey adds. “The London Marathon is such an iconic event, it’s an event that everyone wants to do.”

Born in 1973 in Honiton in Devon, Pavey (née Davis) joined her athletics club while at school and was a talented teenager, setting a British under-15 1500m record of 4:27.9 at the 1988 English Schools Championships. Injuries caused her to miss much of the next decade but she qualified to make her World Championships debut in 1997 and has been an important part of many Great Britain teams since then, with some of her team-mates even affectionately calling her ‘Granny’ in recent years.

Pavey has also acquired the nickname ‘Supermum’ for the way she manages to effectively juggle family life with her athletics career.

The mother of two is coached by her husband, Gavin, who she met at Exeter Harriers and married in 1995. They had their first child, Jacob, in 2009, while their daughter Emily was born in 2013, and Pavey’s first major title – European 10,000m gold at the age of 40 – was claimed when Emily was less than a year old.

“At this stage now I just feel like it’s so exciting to have a fresh new challenge. I’d like to explore what I can try and achieve at the marathon”

With marathon training demanding more from Pavey in the way of long runs, her programme has obviously changed as she has made the switch from track to road. But this extremely driven yet down-to-earth athlete insists that despite needing to log many miles, the balancing act is now actually easier than when she was training for the track.

“I can’t just go and use a track when I want,” she explains. “But where I want to do my main marathon training — like by the canal or doing some hard road repetitions — that’s always available.”

Pavey says it has also been very important to “think outside the box” to fit everything in.

“I’ve enjoyed being able to go training as a family,” she says. “My little boy goes on the bike with me, so he’s a good training partner, and my husband will go as well with my little girl in a running buggy or on the back of his bike.

“We also use the treadmill in the evenings when they are in bed.”

As well as new goals, it’s that successful life balance which helps to keep Pavey motivated.

“I knew it would motivate me to aim for a marathon but it has motivated me even more than I thought it would,” she says. “I think it motivates me that running fits with family life as well.

“I would have retired a long time ago if it hadn’t fitted but I’ve found that we actually get more quality time together and we all go out training together.”

Pavey has been running at least 100 miles a week (“it’s funny really, I never really add up miles”) and, as her training plan has changed, so too has her mind-set.

“When I’m track running, 90 minutes felt like a long run whereas now I feel like it’s just nothing. I just do that as just a normal run, rather than it being a long run,” she says. “The difference is how important the long run is. When I’m running for up to two-and-a-half hours, that’s really important and I need to make sure I do it well.”

With two marathons already under her belt and a personal best in her sights, Pavey knows how important it is to respect the distance and her experiences in London and New York six years ago mean she can offer some invaluable first-hand advice to others taking on a similar challenge.

“I didn’t have ideal preparation for the ones I did,” says Pavey, who suffered injury in the run-up to both events.

“I feel like I can talk from experience about hitting the wall, watching your pace and not going off too fast because I got warned and warned, but as soon as the gun went off I just went for it!”

In London, she went through half-way in 72:28. “I know obviously the real top marathon runners can do that, but I wasn’t ready,” she explains. “I think once you blow up you lose a lot of time, so the last 40 minutes I felt quite delirious. But I still enjoyed the run down The Mall at the end.

“It almost feels surreal — you’ve seen it so many times on the television and to actually experience that, for any runner, it’s an amazing feeling.”

Pavey is looking forward to experiencing that feeling again later this month as the author of This Mum Runs — the book she had published last summer — moves on to her next chapter.

“I’ve been so thankful and grateful for the support I’ve had over the years,” Pavey says with a smile. “I’ve really thoroughly enjoyed my career and I’m still enjoying it, so I keep going!”