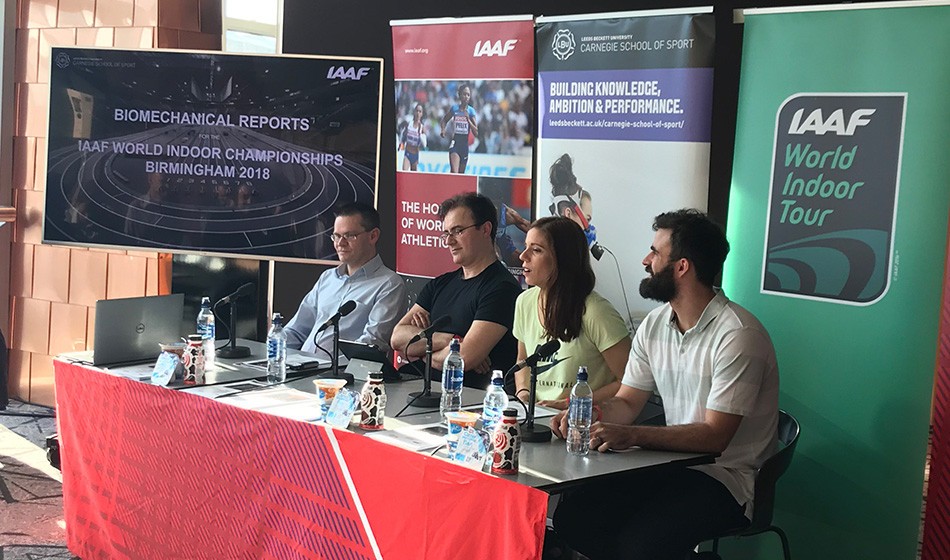 After 12 months of analysis, 13 in-depth reports have been published by the IAAF to provide further insight into the performances of athletes at the 2018 IAAF World Indoor Championships in Birmingham.

A total of 28 high-speed cameras captured more than 650 video files to enable the performances of 161 athletes across the 13 events to be analysed in “forensic detail”.

The biomechanics reports are available to download here, with the findings discussed by lead researcher Dr Athanassios Bissas, head of biomechanics at the Leeds Beckett University Carnegie School of Sport, on Friday in Birmingham, where he was joined by Dr Brian Hanley, Olympic and world pole vault champion Katerina Stefanidi and her coach Mitchell Krier.

Research highlights include advanced analysis of the approach phase during the pole vault competitions, with the study revealing that the fastest pole plant speed among all the female finalists at the World Indoors in Birmingham was Stefanidi’s as she topped 31km/h.

Giving insight into the stages of each vault, the 29-year-old added: “I know usually the second I take off if I’ll make the bar or not.

“The moment of impact in the box is very telling of whether you will be to be able to get on top of the pole and use the bend of the pole and move far enough to make the bar or not.”

Other highlights of the research include:

• Detailed insight into the first 10m of the 60m finals, which reveals that five of the six medals were decided within the first 10m. Only Marie-Josée Ta Lou claimed a medal (silver) after being outside the top three at the 10m mark.

• Measurements of the sprinters’ exit times from the starting blocks which reveal that the average time was identical for male and female sprinters (0.5 seconds).

• Unprecedented analysis of the men’s high jump by dissecting the performance into 31 different biomechanical variables.

Dr Bissas said the London study had been exceptionally well-received around the world and he expected this study would have similar resonance with the athletics community.

“We have again deployed three-dimensional motion techniques to analyse key events, building upon what we learned in London 2017,” he said. “We have refined these techniques and the data captured illustrates what we can learn when science is applied. It is fascinating and remarkable at the same time. We believe our findings will again excite the athletics community.”

IAAF president Sebastian Coe added: “These biomechanics studies have given us all a fresh and fascinating insight into the extraordinary performances of our athletes, and reflect the IAAF’s drive towards innovation and technology that can help us to showcase athletics in new and exciting ways for all our followers.

“I’m sure coaches the world over will be examining these reports closely for knowledge they can use to enhance their training programmes and develop their athletes.

“I commend the IAAF Development Department and the team at Leeds Beckett University for their exceptional work in producing both the Birmingham 2018 and London 2017 reports, which have contributed significantly to our understanding of high performance.”