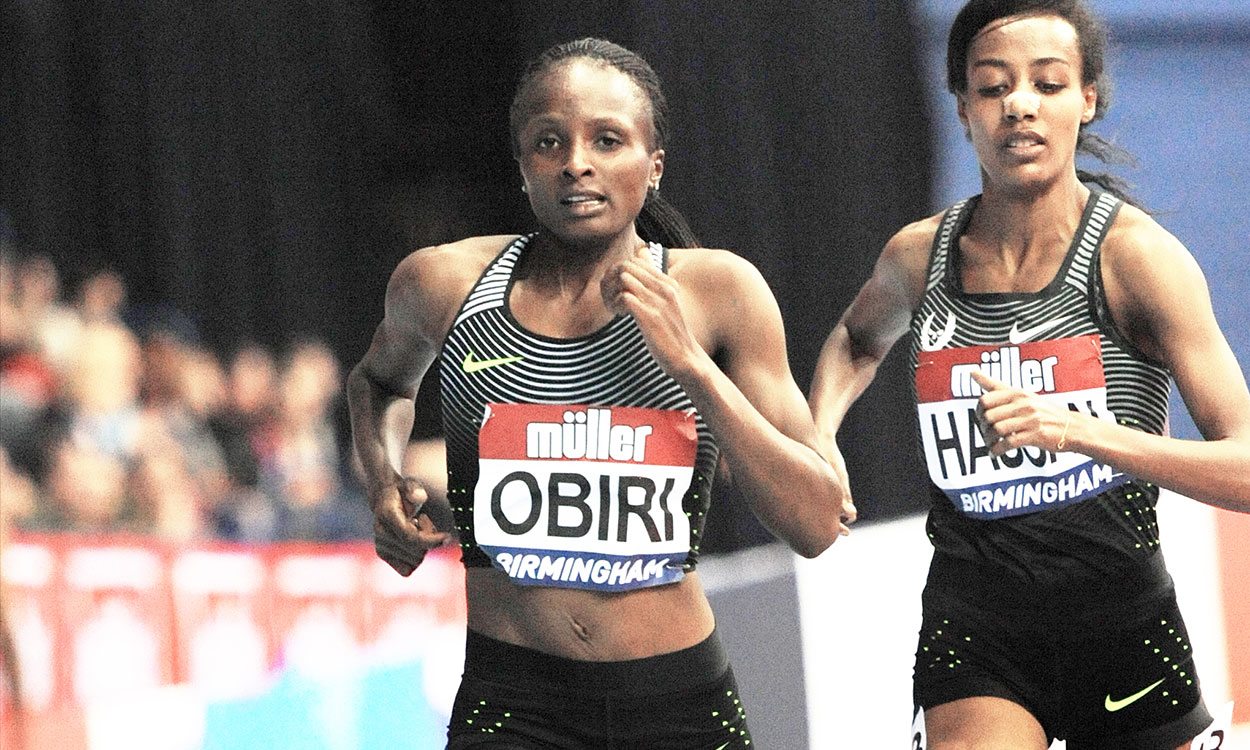 Kenya’s Hellen Obiri is a versatile runner, having won major medals at 1500m, 3000m and 5000m as well as winning some cross country races. I asked her what she thought her best distance was. “I cannot say,” she replied. “I do not want to do the longer distances so I will probably stay at 5000m but also run some 1500m.” Might she run a marathon one day? Perhaps some time in the future, but she added that she had not yet achieved everything she wants to on the track.

Like many Kenyans, Obiri started running to get to and from school faster. She ran seriously in high school but mainly over 200 and 400 metres.

She announced herself on the big stage in 2012 when she won the 3000m at the IAAF World Indoor Championships in Istanbul. She recalled: “I was not sure I was going to win because I was new and it was my first big race.” But she did, in 8:37.16.

“The problem is without indoor tracks in Kenya you cannot prepare well. But for me, like running outdoors, it is about mental focus.”

Obiri’s first major event was the 2011 IAAF World Championships in Daegu where she ran a PB of 4:07.59 in her 1500m heat and progressed comfortably to the final, only to fall and finish down the field. The following year she reached the London Olympics 1500m final where she was, in her words, “in very good shape and capable of getting a medal”. Then, with 300 metres to go, there was a tangle of legs and Obiri was on the ground. She finished 12th.

She avoided trouble in the 2013 World Championships in Moscow and took bronze in 4:03.86 behind Abeba Aregawi and Jenny Simpson. She said of the race: “That was my first outdoor medal. I was in very good shape and did my calculation well. I was very happy as I had started progressing at that level.”

Obiri moved up to 5000m for the Rio Olympics, where she finished second behind Vivian Cheruiyot, and said: “That was a memorable event because I don’t usually run 5000m. It was unbelievable for me to get a medal because I didn’t even expect to make the Kenyan team. But I had trained hard and it was an unbelievable thing for me.”

So what sort of training does it take? “In Kenya we run by the clock so I don’t know how many miles I run,” she said. “We might run for 50 minutes or in a longer run 1 hour and 20 minutes. I also do fartlek and speed work and we mix those sessions up. You cannot train alone, you need others to help you.”

In Birmingham earlier this year at the Müller Indoor Grand Prix, Obiri set a Kenyan record in the 3000m. Now she will concentrate on the outdoors with the twin aims of making the Kenyan team in the 5000m for London 2017 and getting another world medal. And I for one would not be surprised at all to see her do it.

The UK Inter-Counties XC Champs will go ahead in 2021, coronavirus permitting.

Speculation has surrounded the event's future due to the CAU being low on funds but Cross Challenge co-ordinator Cliff Robinson says the XC event is not under financial threat. https://t.co/GOSejkUwhs