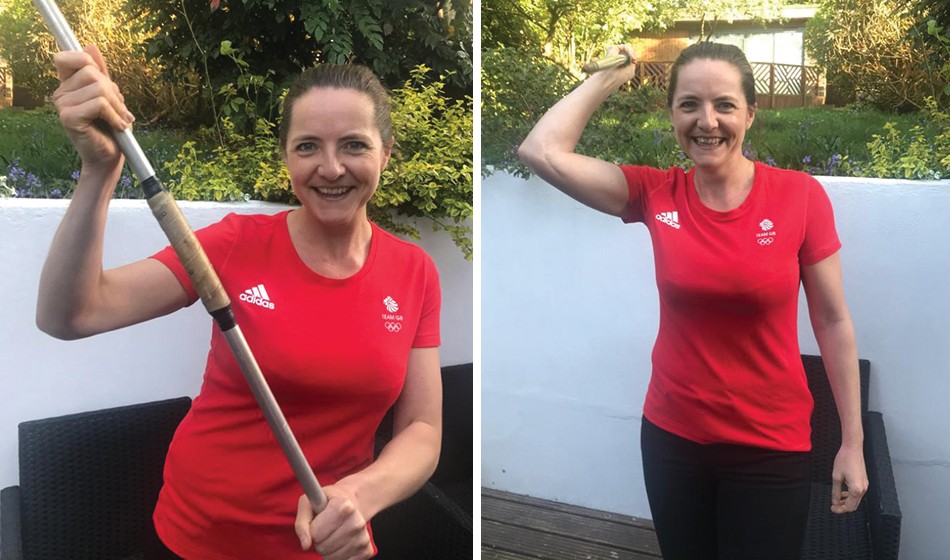 Olympic medallist returns from retirement to run 2.6 miles while throwing her very first javelin to raise money for the Ron Pickering Memorial Fund

Goldie Sayers will make a temporary return from retirement this weekend as she takes on a javelin challenge with a difference to raise money for the Ron Pickering Memorial Fund (RPMF).

The 2008 Olympic bronze medallist, who last threw competitively in 2016, plans to run 2.6 miles while throwing a javelin as part of The 2.6 Challenge.

Testing herself even more, Sayers will be using her very first javelin, which the British record-holder says “doesn’t actually resemble a javelin”, as she has given away all of her other implements, with some having gone to heptathlete Niamh Emerson who Sayers helps to coach in throws, and others for athletes to use in Loughborough.

“I’m using the first javelin I was ever given to take home over the school Easter holidays,” Sayers tells AW. “It’s just a piece of metal that I stuck a javelin grip on! Because it got wrapped around a few trees whilst practicing as a kid, it’s also banana shaped, so not wildly aerodynamic.

“Effectively, I haven’t thrown a javelin since I retired. I expect to be incredibly stiff the next day, put it that way.”

The 2.6 Challenge has been created to raise vital funds to help the country’s charities during the coronavirus crisis, with estimates that the UK charity sector will lose £4 billion in income as a result of the pandemic.

The fundraising campaign launches on Sunday (April 26), which was the original date of the 40th edition London Marathon – the world’s biggest one-day annual fundraising event which raised £66.4 million for charities in 2019.

The London event is the main fundraiser for the RPMF each year and so the charity is encouraging people to get involved with The 2.6 Challenge – which will see people to take on an activity based around the numbers 2.6 or 26 – to make up some of the shortfall in funds.

The RPMF (rpmf.org.uk) supports many of Britain’s most talented young athletes with financial grants totalling tens of thousands of pounds every year. The charity was formed in 1991 by Jean Pickering MBE following the death of her husband Ron Pickering OBE, the legendary BBC sport commentator and athletics coach.

Sayers herself is a former grant recipient and is now a proud trustee of the charity.

Explaining her own challenge, Sayers says: “Initially I thought it was going to be a challenge, but doable, but the more I am actually thinking about it, I will have to do a lot more throws than I first anticipated! So it could be a lot more challenging than I perhaps was hoping, but then I suppose that’s the point!

“Obviously I can’t run a marathon, I’m not an endurance athlete by any stretch! So I thought, what could I do? Because there will be a significant shortfall for the charity and we want to be able to give out as many grants as we possibly can in the autumn.

“It’s just my way of doing my bit and hopefully because it’s a slightly ridiculous challenge, people might want to donate! Plus, I’m bribing people with a prize of Olympic kit.”

In partnership with #twopointsixchallenge I shall be running 2.6 miles whilst throwing a javelin to raise money for @RunforRon Donate here and win a @TeamGB prize https://t.co/PMYk9xyYQw pic.twitter.com/hkegJRwI1u

On supporting the RPMF, she adds: “It was the first charity that recognised my talent and passion for athletics. I think with the grants, it’s not just giving kids money, it’s giving them the recognition that people are behind them which I think is almost more important than the money.

“I was very close to the Pickerings as an athlete and wanted to do something to give back to the sport which is why I have become a trustee.

“There have been several athletes who have gone on to be able to make a living from the sport, several have given back the grants that they had as athletes. I think Mo (Farah), for example, bought his first ever pair of spikes with his grant and I know his foundation have given money to the charity, as have I and Katharine Merry and Iwan Thomas after they went on a quiz show.”

Sayers’ fundraising page can be found at uk.virginmoneygiving.com/GoldieSayers

RPMF trustee Jo Jennings-Summers said: “It’ll be a very tough year for everyone this year and for Ron Pickering Memorial Fund, our normal sources of fundraising will take a huge hit. This will impact especially on the youngsters with hardship or challenges, and at a crucial stage too when support from home might be even harder. So these events based around Sunday are a great chance to help.”

Sayers is not the only Olympic medallist taking on The 2.6 Challenge for the RPMF, as 1984 Olympic 3000m silver medallist Wendy Sly also plans to get involved as she is now unable to run the London Marathon for the charity as originally planned.

Sly has set herself a 26-minute challenge to see how far she can run within that time frame.

I will be taking part in the #TwoPointSixChallenge, taking on different exercise challenges over the next 5 days, all based around numbers 2 and 6.⁣ ⁣ This video shows what I’ll be doing to raise money for @greenhousesports. To find out more about the charity and to donate click my #linkinbio⁣. ⁣ #run4wales #HomeCoach #sportshelps #stayhomesavelives #athletics

While many clubs are also getting involved, including Deeside AAC who have created a relay challenge which will see runners complete 2.6km, 2.6m or 26km in a 26-leg relay, at all times adhering to Government social distancing measures.

GB international Charlie Hulson, who was due to be running the London Marathon, will be among those taking part as he starts his leg outside of the Countess of Chester Hospital and runs the 26km to Wrexham Hospital. (See uk.virginmoneygiving.com/DeesideAAC2.6RelayChallenge)

A number of Hulson’s fellow GB internationals, who should also have been running the London Marathon on Sunday, have come together to run a virtual relay of 2.6 miles each to raise money for the charity Mind.

For more on The 2.6 Challenge, visit twopointsixchallenge.co.uk