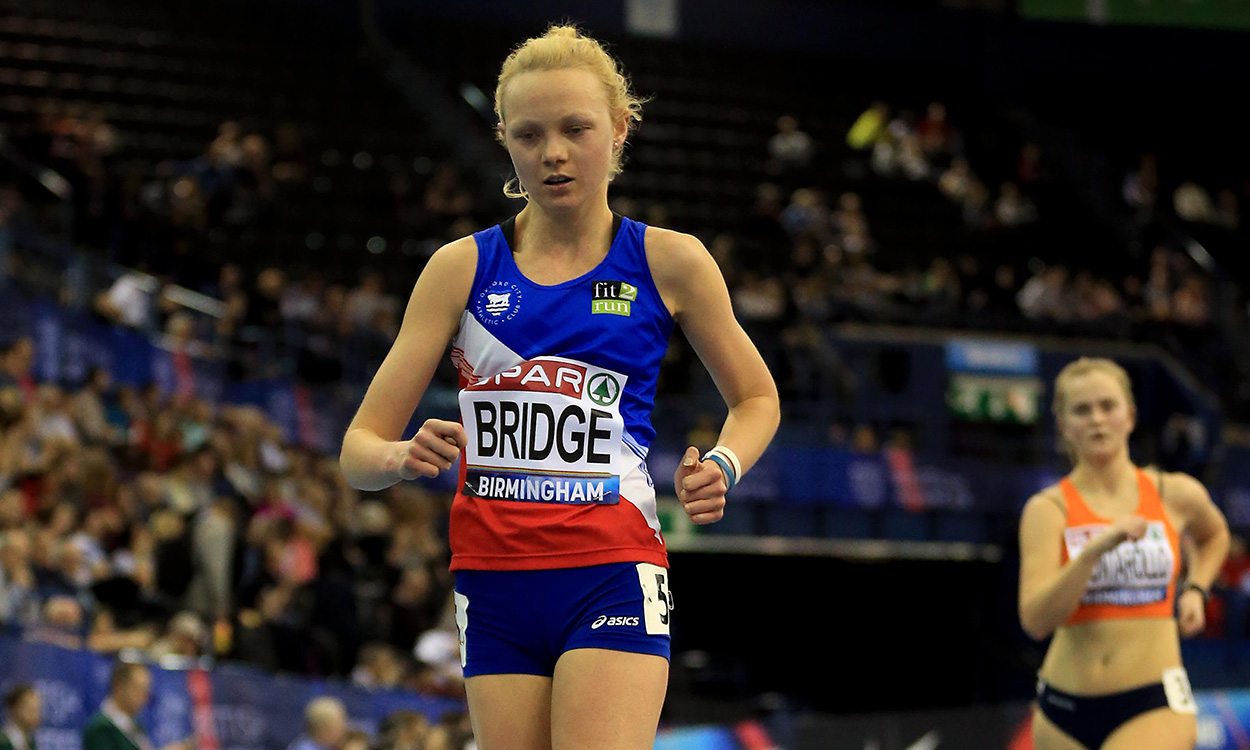 Gemma Bridge has come a long way in a short time as a race walker and after representing GB at the IAAF World Championships in London, she’s now getting ready to pull on the England vest at the Gold Coast Commonwealth Games.

In 2012 as a student at the University of Birmingham, Bridge attended the British Championships and watched race walking for the first time. She was intrigued. “I thought it looked interesting,” she said, “but at that time running was my focus. All my friends were running so it wasn’t the right time to change.”

The 24-year-old was a good club runner with a PB of 35:55.93 for 10,000m and had run a half-marathon in 79:12. She spent two years in the US at McNeese State University in Louisiana on an athletic scholarship, where she competed in a number of NCAA div 1 races and the Southland Conference, against some of the best college runners. Her best performances included second place in the track 10km, fifth place in the 5km and sixth place in the cross country championships, not to mention winning the 3000m at the wonderfully named McNeese Cowboy Relays.

Upon returning from the US she continued with running – but just for fun – which was good for a while but then she craved competition. It was then that she decided to give race walking a proper go. “I only wanted to do race walking if I could find a group to train with,” she said. “So, when I was offered a PhD in Leeds in February 2017 I thought that it was time to give it a go – as the best race walking group is located in Leeds.”

For someone who decided to commit to race-walking just over a year ago, her progress has been remarkable. In 2017 she won the British indoor 3000m race walk title with a PB of 13:23.59. She then entered some international races, coming eighth in the Lugano Trophy 20km and 10th and 14th in two races in Podebrady in the Czech Republic.

Was she surprised by how quickly she was able to make an impact in international races? “Yes, very much so,” she said. “My aim for the first race in March in Lugano was to break 100 minutes, which is good but not world-class. And I did that by three minutes in the first race.”

Then came the world championships, where Bridge placed 40th in the 20km race walk. She enjoyed the experience but found the race difficult.

“It was hard,” she explained. “I think it was just one race too many but I enjoyed the last kilometre. I just didn’t feel great from the start. It was frustrating because it wasn’t as if I was out of breath, I just couldn’t move faster.

“The time (96:04) wasn’t too bad, so it was OK. I think a lot of my issues were the tactics. I didn’t get into the right place and then I was on my own and that was never a good place to be.”

While she has been making great progress in the sport, race walking is not her sole focus. In her PhD she is looking at opinion diffusion in social media networks – with a focus on the soft drinks levy and sugar free product promotion and adoption.

Balancing studies and training is a challenge.

“I train six days a week, most days twice,” she explained. “It is not all walking, I do running three times a week and gym sessions twice. It’s hard to balance especially last summer when I was away for so long. It is going to be a learning process and it may be that part of the year I prioritise training and a part of the year I prioritise studies.”

She admits she will take some work with her to Gold Coast, too.

On her next competition, she added: “I am looking forward to the Commonwealths. It would be good if I can go into it feeling completely fit with no niggles. I think it just happens when training is hard you get niggles and then as you get closer to the competition it is better.

“So I’m hoping that everything clicks and I feel OK there.”

Speaking at a time when the country was covered in snow, she added: “I’m looking forward to the warmth and getting a bit of sun!”