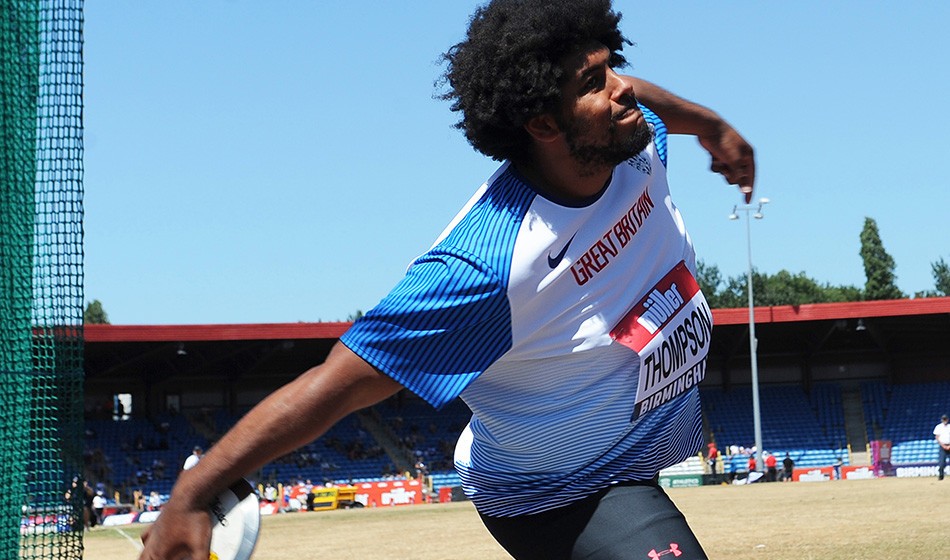 The US-based thrower is No.4 on the UK all-time rankings

Greg Thompson is looking forward to making his mark at the British Championships and IAAF World Championships in Doha after jumping to No.4 on the UK all-time rankings for the discus in the United States.

The Shaftesbury Barnet athlete is studying for a double degree in kinesiology and philosophy at Maryland University in the US but despite his busy academic schedule threw a Doha qualifying mark of 65.56m at the Penn Relays in Philadelphia in April and is hoping for further improvements this summer.

The UK record of 68.24m was set in 2012 by Lawrence Okoye and during that same year Thompson won English Schools gold in Gateshead throwing in trainers.

Talent runs in the family, too, as he is the son of Neville Thompson – a former GB international. Thompson Snr threw 55.68m at Crystal Palace in 1993 and Thompson Jnr beat that mark at the same venue soon after his 20th birthday.

“With my dad being an international from the moment I could walk it was, like, ‘let’s grab a disc and have some fun with it’,” he remembers. “I have vivid memories of being a little ’un and trying to pick up a 2k discus after he’d thrown it and trying to throw it back to him but he told me to take my time and not hurt myself. When I grew up, he was always the archetype and what I wanted to live up to.”

Initially, Thompson played rugby, football, badminton and he loves snooker too. He has a brother in the Arsenal football squad as well, but his heart is in athletics.

Formerly coached by his father, Thompson is now guided by Travis Coleman at Maryland University. Unusually, he is left-footed and left-handed but throws with his right arm.

“My dad always threw with his right arm so from the moment he got me a small makeshift discus as a kid I tried to put it in my right hand,” he explains.

He also plays badminton and throws a javelin with his right hand but throws darts and a basketball with his left. “When it comes to the finer motor or precision skills or writing, I use my left,” he says.

The Briton stands 6ft tall but is not that large for an elite discus thrower. So he utilises his speed in the circle and athleticism to get the most out of himself.

“When I threw 65m recently, the athlete who was second, Roje Stona of Jamaica, is about 6ft 6-7in tall and completely dwarfed me,” says Thompson.

As he reaches the end of his fourth year at Maryland University, too, he juggles training with studies. “I have a good blend between the two,” he says.

All eyes will be on Thompson to see if he can build on his big early season throw – and next week he competes for Great Britain in the World University Games in Naples, Italy. As someone who won a medal in a UK maths competition seven years ago, he will have no problem calculating how many more metres he needs to leapfrog further up the national rankings.

In addition to Okoye, the only Brits who have thrown further are Brett Morse and Perriss Wilkins – although the latter is a discredited figure after allegations of using a light discus at competitions in addition to a doping ban.

“I knew something was in the tank this year and something was brewing,” Thompson says on his big throw. “I threw a PB in training before Penn Relays and I thought that if I got everything right I could throw 65 metres.

“I’ve felt my potential has been around 65 metres for a year or so but it hasn’t happened until this year due to a myriad of physical and mental factors.”

Thompson, who turned 25 last month, has previous international experience as he finished 10th in the 2013 European Juniors. But after the World University Games he is aiming to seal selection for Doha at this summer’s Müller British Championships – a competition where he finished runner-up to Morse 12 months ago – and he would love to compete at the Diamond Leagues in the UK.

“I’m looking forward to being a small fish in a big pond and rising to the challenge,” he says.