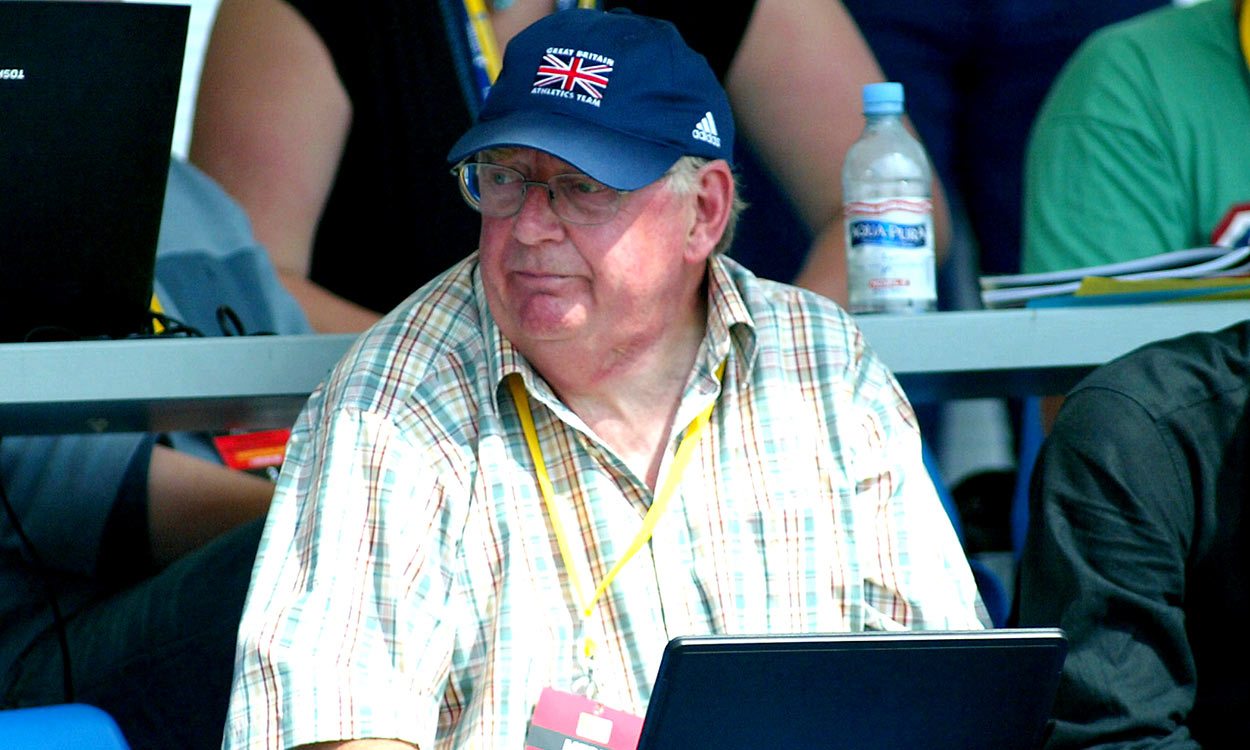 Trevor Frecknall, Athletics Weekly’s news editor for much of the 1990s, has died aged 72 after a long battle with cancer.

A jovial journalist with a rich sense of humour and a deep passion for the sport, Frecknall will be warmly remembered by a generation of athletes, coaches and officials. Such was his popularity, social media has been awash with tributes from people whose lives he touched.

“Trevor’s warmth and genuine enthusiasm and love for the sport endeared him to so many of us,” said world marathon record-holder Paula Radcliffe, while long jump star Greg Rutherford added: “He was a lovely, lovely man that did an awful lot for the sport” and heptathlon legend Jess Ennis-Hill said: “So sad … he was great for our sport and more importantly a really lovely man.”

Frecknall oversaw the news pages in AW from 1993 to 2000 but made a huge impact during those seven years. Due to his tremendous work ethic, ebullient personality and sheer volume and quality of words in the magazine, many readers incorrectly thought he was the actual editor. While he never held that premier position at the title, he nevertheless stamped his personality over many of the issues during the mid to late 1990s.

His first love was cricket and, before joining AW, he had been sports editor of the Nottingham Evening Post where his stint at the newspaper coincided with Brian Clough’s reign at Nottingham Forest.

The maverick football manager was notoriously unpredictable and famously did not suffer fools. But dealing with Clough on a weekly basis meant that nothing fazed Frecknall during the remainder of his journalism career. 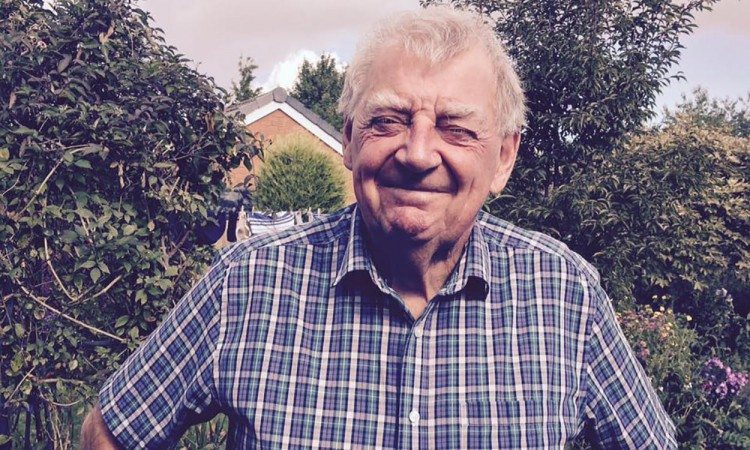 Their first-ever meeting resulted in Frecknall being kicked – quite literally – out of Clough’s office. The Forest manager was upset that Frecknall had replaced one of his journalist friends on his local paper. “Don’t take it personally,” said Clough. “Just remember all life’s a game!”

“If that’s the case, I’m in it to win as well!” Frecknall retorted, as he was frog-marched out of the building, but such was his charm and skill as a reporter he later earned Clough’s respect to such a degree that he travelled with the players to their historic European Cup-winning matches and was once allowed to carry one of the club’s newly-won trophies out of Wembley to the team bus.

Given this, dealing with big characters like Linford Christie and Andy Norman at AW was easy. Frecknall’s specialist areas, though, were the politics of athletics and cross-country running. During a period where athletics officials were forever at odds with each other, Frecknall gave AW readers an insight into the internal wranglings that would culminate in the national federation going bankrupt in 1997, whereas on the cross-country circuit he chronicled the early steps of runners like Radcliffe and Mo Farah.

As a rookie journalist who joined AW in 1997, I had the privilege of being mentored by Frecknall during his final years at the magazine. I had none of Frecknall’s old-school journalistic skills – a keen nose for a story, a natural curiosity, lightning-fast shorthand and punchy, reader-friendly writing ability – but I think he recognised my love of athletics and basic enthusiasm and took me under his wing. 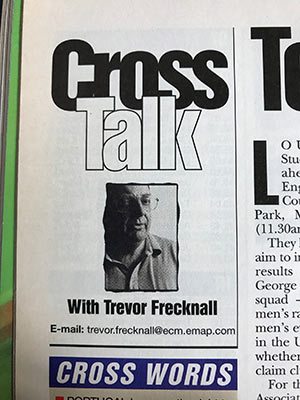 Such was his popularity, a five-minute walk from the car park to the clubhouse at a cross-country event would take 50 minutes as he was stopped every few yards by people wanting to say ‘hello’. He got on particularly well with older officials but the athletes also loved him and appreciated the honest and accurate coverage he gave them in his events coverage and weekly Cross Talk column.

On one occasion, Tara Krzywicki won the Inter-Counties cross-country title and charged through the finishing funnel toward Frecknall, who was waiting with his notepad and pen. The journalist was after some quotes but got more than he bargained for as the athlete threw herself into his arms. Such was his bond with the athletes.

Every meeting I covered with Frecknall was an education. At the 1998 European Championships in Budapest, for example, British athletes enjoyed a tremendous final weekend with gold medals galore from the likes of Steve Backley, Jonathan Edwards and Denise Lewis. Frecknall was covering the men’s events and I was writing about the women’s events and eight of Britain’s nine gold medals were won by the men. But Frecknall finished his magazine reports after the final session on Sunday night in half the time that it took me, despite disappearing for half an hour or more to gather quotes from delighted officials such as Dame Mary Peters.

Unlike many journalists, Frecknall did not suffer from writer’s block. Instead his words flowed on to the page. Maybe it was partly to do with an apprenticeship spent filing “on the whistle” reports at the end of football matches straight off the top of his head down a telephone line to copytakers.

Given his ability, Frecknall often grew frustrated with colleagues or wonky technology. At the 1998 European Cup in St Petersburg, for instance, he was unable to send his words from Russia to England due to email problems and so instead spent several hours on a rather expensive phone call to the AW office dictating his thousands of words to a colleague until about 4am.

Mark Shearman’s photographs, though, were simply stuck in St Petersburg and the magazine was forced to go to print with Frecknall’s dictated reports and stock images from old events. What made it worse was that Great Britain won the Cup and few days later, on arriving back in the UK, Frecknall took one glance at the magazine and hurled it from one side of the office to the other in disgust.

He always had immense pride in his work and a keen sense of professionalism. So when technology let him down, it drove him mad with frustration. Like his old sparring partner, Clough, Frecknall was also frequently exasperated with colleagues and poured scorn on what he dubbed “convenience journalism” whereby reporters take an easy route to a story rather than going the extra mile by, for example, asking uncomfortable questions during difficult phone calls, or by failing to do time-consuming research.

The moments when Frecknall lost his sense of humour were few and far between, though. Most of the time he worked with a smile on his face and his motto was “if you don’t laugh, you’ll go mad”. Even when he was being cynical or critical, it was delivered in jokey fashion. “How many people work at AW?” a couple of young athletics fans once asked him. “About half of them,” he snapped back with a mischievous glint in his eye.

Working with Frecknall certainly kept you on your toes. At one particular meeting in Birmingham, he despatched a young female junior reporter at AW to “go and get some wind speeds from the organisers to go with the sprint results”. She walked halfway around the arena before realising it was an indoor meeting and that Frecknall was merely having a bit of fun.

It wasn’t all jokes, though. Like most performers at the top of their game, Frecknall worked incredibly hard behind the scenes. He would often drive back to his lifelong home of Newark after a day spent in the AW office in Peterborough to then start tackling some evening work until midnight or beyond.

If he had a flaw, he would often try to cram too much information into the pages. This happened on the eve of a European Cup once when he worked all night on a ‘fantasy prediction’ table based on the athletes’ season’s bests or PBs. The problem was, though, the designer could not fit all the stats into a double-page spread and was forced to present them at an awkward right-angled style. Always able to find an imaginative way around problems, however, Frecknall merely began the article with the words “this preview is so good, it’ll knock you sideways!”

At the turn of the millennium Frecknall left AW to join UK Athletics as a media officer. After closely covering Dave Moorcroft’s period as UKA chief executive, the pair had developed a great bond and Frecknall was excited to begin a new chapter in his life.

But he discovered the world of modern PR was not for him and he soon moved into a life of semi-retirement and found the time to write a terrific memoir about Clough, plus the autobiography of marathon legend Bill Adcocks and historical books where he revived long-forgotten stories of heroism in his native Newark.

Sadly, his only writing in recent months have been updates on his declining health on Facebook, where he nurtured an audience of old friends and fresh admirers with his witty and insightful comments.

Some of the comments I recognised from my days working alongside him in the 1990s and indeed there is not a day that goes by where I do not quote, to myself or current colleagues, what I call “Frecknallisms”.

He is survived by Gill, his childhood sweetheart who he married in 1966, and children Claire and Ian.

The funeral for Trevor Frecknall will take place at 11:00 on Tuesday November 14 at North Muskham Methodist Church in Newark, Nottinghamshire. A request for no flowers. Any donations to Beaumond House Hospice.