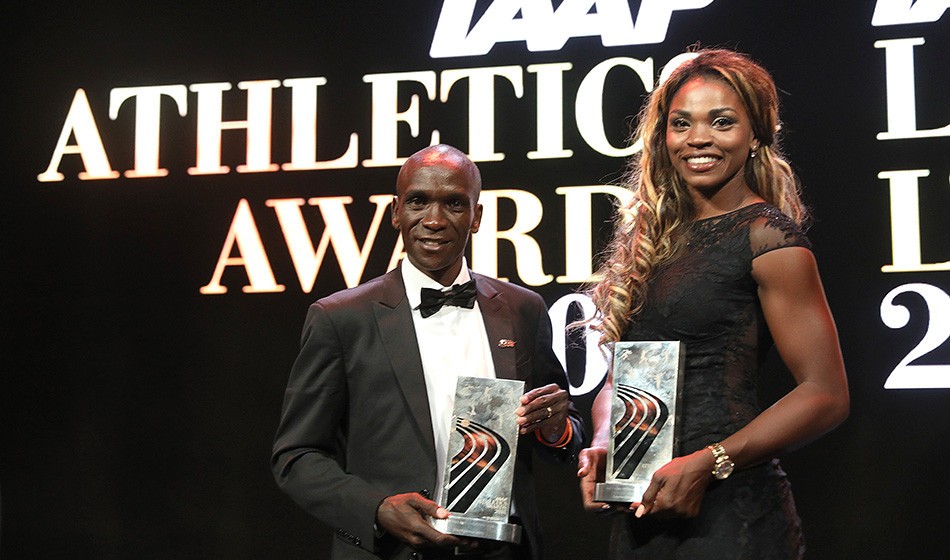 World record-breaker Eliud Kipchoge and jumps star Caterine Ibarguen were named the world athletes of the year at the IAAF Athletics Awards in Monaco on Tuesday evening.

Kenya’s Kipchoge ran his incredible 2:01:39 marathon world record in Berlin in September and that performance followed his victory on the roads of London in April, when he clocked 2:04:17.

The 34-year-old took 78 seconds off the previous record with his time in Germany.

“This award means a lot to me,” said Kipchoge.

“I want to pass my gratitude to my family, my wife and my children – they are my ignition key every morning when I am waking up for training.

“Secondly I want to say thank you to my coach Patrick Sang, and to my management Global Sports Communication as they have exposed my career and I am able now to show to all that if you believe in yourself and work hard, you can achieve more. Finally a huge thank you to my sponsors Nike and NN.”

For Colombia’s Ibarguen, not only did she set the triple jump world lead and remain unbeaten in eight finals in that discipline, but she also became the IAAF Continental Cup winner, IAAF Diamond League champion and Central American and Caribbean champion at both the long jump and triple jump.

“I’m struggling to stand up because I’m shaking so much,” said a shocked Ibarguen, speaking through an interpreter.

“I’d like to thank all of Colombia, my coach, my family and all of the people who voted for me.”

Swedish pole vaulter Duplantis did still secure an award, however, as he was named one of the IAAF’s ‘rising stars’ alongside USA’s Sydney McLaughlin.

The Male Rising Star Awards winner for 2018 is @mondohoss600🇸🇪💫#AthleticsAwards pic.twitter.com/oQabyiaYe5

US distance running coach Joe Vigil received the IAAF coaching achievement award, while Evelyn Claudio Lopez, who has been dedicated to promoting women’s athletics, gained the woman of the year honour.

Andreas Brugger helped to make Zurich’s Weltklasse one of the most prestigious meetings in the world and the 91-year-old was named winner of the IAAF president’s award.

Felix Sanchez Arrazola won the photograph of the year award for his image of a mud-splattered Selemon Barega at the Cross Internacional Juan Muguerza in Elgoibar.

For this stunning shot of @SelemonBarega at the Cross Internacional Juan Muguerza, Felix Sanchez Arrazola 🇪🇸 has won the Photo of the Year Award for 2018 🏆📸👌 pic.twitter.com/yZpOFJvBk7