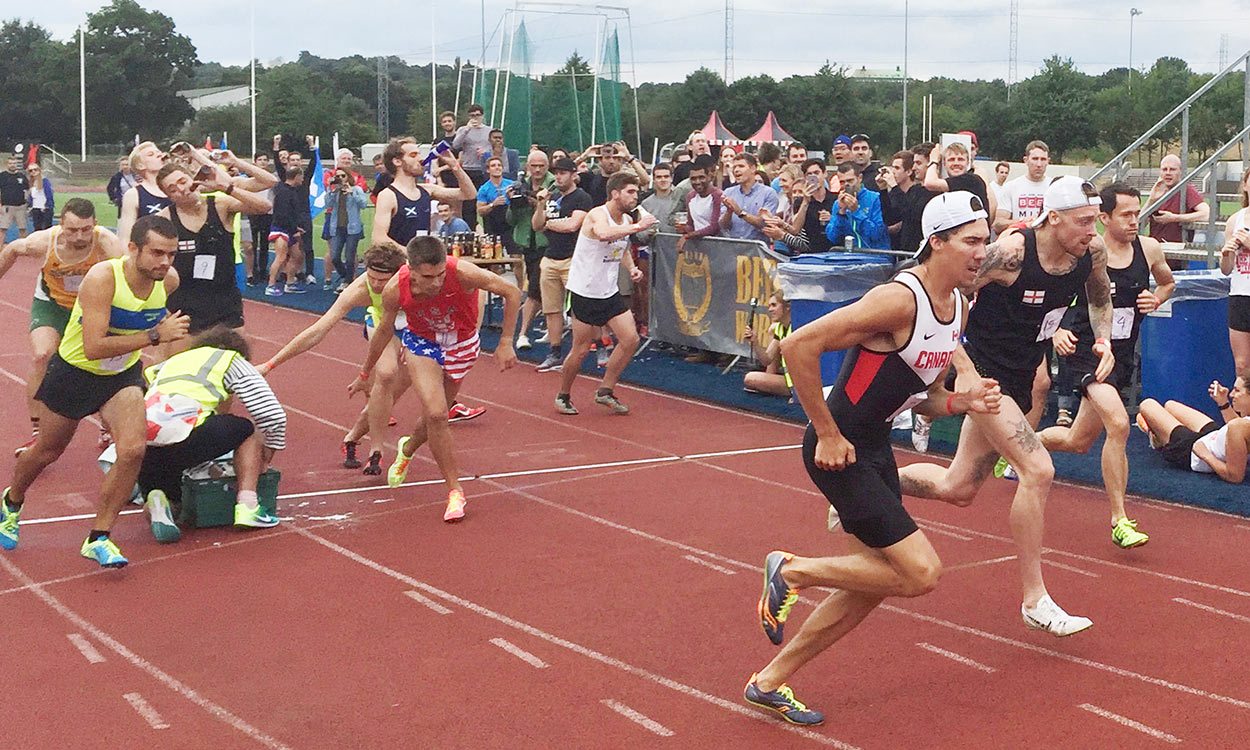 One of the biggest clashes of the summer is set to take place on August 12 in London. Not at the IAAF World Championships, though, but on the other side of the British capital at Allianz Park – the venue of the 2017 Beer Mile World Classic.

The crazy combination of athletics and alcohol produces an entertaining cocktail of a competition. It has caught the imagination of the running world in recent years and some of the world’s finest gastric gladiators will be at Allianz Park on the final weekend of the IAAF World Championships to run, drink and occasionally vomit as they compete for bragging rights in one of the most bizarre – and increasingly popular – off-shoots of track and field.

Yet all eyes will be on two men – Corey Bellemore of Canada and Dale Clutterbuck of Britain.

Last year Bellemore coasted to victory in a world record 4:34.35 with Clutterbuck runner-up in a European record of 4:47.39. But Clutterbuck went into the race unprepared at the end of a poor track season. He only found out he was doing the 2016 race a couple of days earlier and he even knocked back a few drinks before the race ‘to warm up’.

This year, however, he is training for the event with fellow international runner Ben Coldray. The pair are doing a weekly interval session where their recovery period includes downing a bottle of beer and they have been recording their progress on YouTube.

“People might think this is nuts and I’ve gone mad, but there’s a bigger picture,” says Clutterbuck. “I’d love to qualify for the Commonwealth Games next year and if this helps me get a bit of sponsorship so I can train harder, then it will have been worth it.”

Bellemore was signed by Adidas after his beer mile triumph 12 months ago while the previous world record-holder, Lewis Kent of Canada, earned a similar deal with Brooks.

“Ultimately it’s just a few beers and a bit of fun with a friend, Ben, once a week,” Clutterbuck continues. “It won’t do me any harm and I still plan to be competitive at events like the British Champs this summer.”

While Canada and the United States has dominated the beer mile record books recently, Britain has a good tradition. Chris Parr of Gateshead Harriers, for example, was considered almost invincible in the ‘Chunder Mile’ – a more difficult variation of beer miling where proper pints are consumed.

Clutterbuck believes a beer mile in four-and-a-half minutes is roughly equivalent to a sub-four-minute mile in ‘normal athletics’ and he adds: “The sport needs to be livened up. I go to some meetings and they’re pretty boring. The gun goes, you race and that’s it, you go home. Whereas in places like Belgium they all have a few beers and everyone has a laugh. Plus, I’m the kind of person who needs to keep entertained through the season.”

Clutterbuck also reckons his mid-race drinking technique was wrong last summer as he was holding the beer too vertically. “If you hold it at an angle and twist the bottle, it goes down easier,” he explains.

When it comes to this year’s Beer Mile World Classic, he can almost taste victory.