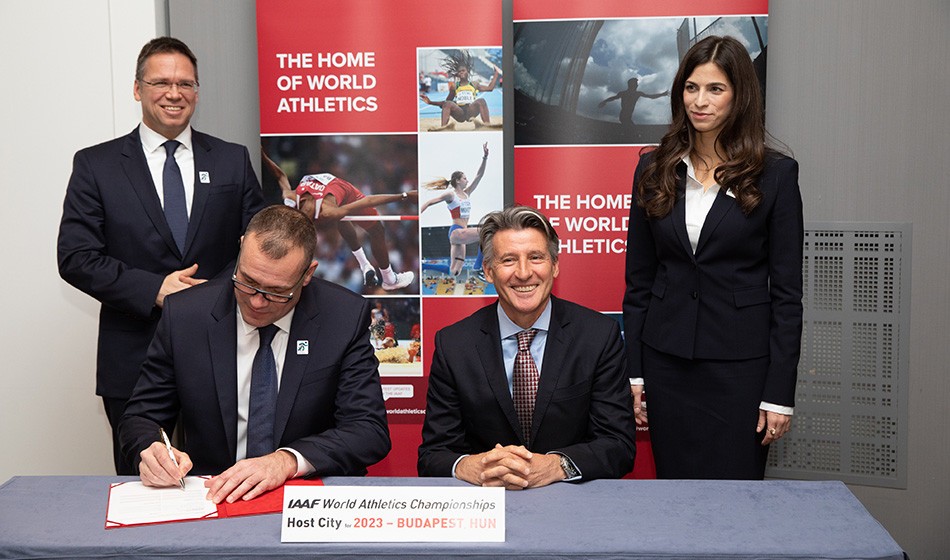 The 2023 IAAF World Championships will take place in Budapest, it has been confirmed.

There have also been moves to stage the Olympics in recent years but last year it pulled out of a bid to hold the 2024 Games.

Budapest will follow Doha next year and Eugene in 2021 as the city that will stage the world governing body’s flagship event.

A big congratulations to @MartonGyulai the CEO and his team who made a great presentation to the IAAF Council today and have now officially signed the contract for the @IAAFWorldChamps in Budapest 2023 🇭🇺🇭🇺🇭🇺🇭🇺 #ItsComingHomeToEurope pic.twitter.com/sku8DqgAGD

“In the past 30 years Hungary has organised every single world and European Championships, indoor and out – on the road, cross country – available to us except for the world athletics championships, and we are incredibly proud that this collection will be complete in just under five years’ time,” said Marton Gyulai, CEO of the bid committee for Budapest 2023.

A key component of the bid is the construction of a new stadium that will serve primarily as an athletics facility.

The new stadium will be built on the eastern bank of the Danube River on the city’s south side, with a capacity of 40,000 for the championships, which will be reduced to 15,000 for future events.

The decision to award the event to Budapest came after a consultation process rather than the previous model of bid campaigns.

Following the bid delegation’s presentation to Council, IAAF president Sebastian Coe said: “We are delighted to award the 2023 world athletics championships to Budapest in Hungary, a country of extraordinary athletic tradition and great experience in organising world-class sports events.

“It has been the scene of some of our greatest moments as a sport. We are excited about their plans for a new stadium that will become a great legacy for athletics.”

At the 215th IAAF Council meeting in Monaco, the Council also considered a bid from Australia to host the 2021 World Cross Country Championships but no decision was reached.

“We had an initial presentation from Athletics Australia outlining a proposed bid concept,” Coe said. “The Council requested further development of aspects of this bid concept.”