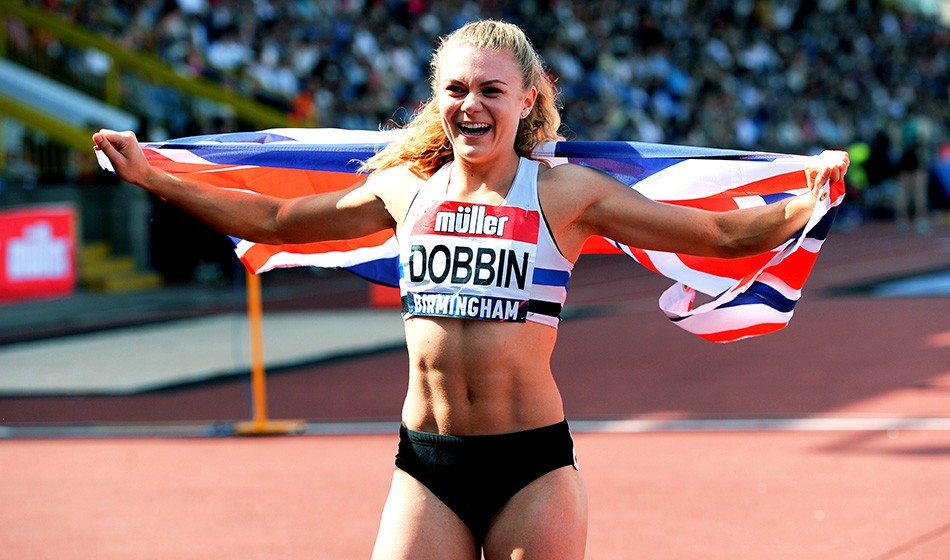 More than a year on from her breakthrough to win the British 200m title, Beth Dobbin admits that her impressive progress is still sinking in.

The Scottish sprinter says going into this weekend’s Müller British Athletics Championships as a defending champion is a “surreal feeling” but her experiences over the past year have shown her not to put a limit on what she might be able to achieve.

While gaining a GB vest was a dream at the start of last summer – one which ended with her becoming a European finalist – Dobbin now knows that representing her nation on the global stage is well within reach and she intends to secure her spot for the IAAF World Championships in Doha when she returns to Birmingham on Sunday.

“Going in as the defending champion is a surreal feeling but I just know that if I could do it last year, when it was completely unknown to me, I feel like this year I’m in a better position in terms of more experience,” says the 25-year-old.

“Last year I was so nervous. Before my race I remember seeing my friend from work and tears came into my eyes. I went to the toilet and was like ‘don’t cry, don’t cry’ because I was just so nervous. This year I feel like I have matured a lot. I’m going there to qualify for the Worlds and that’s that.

“I still see myself as a 23-mid runner, I’ve not accepted actually the fact that I am running times that my idols are running so it is really weird to get used to.”

In fact, Dobbin is now a whole second quicker than that, having improved her Scottish record to 22.50 to finish third at last month’s Müller Anniversary Games behind double Olympic champion Elaine Thompson and world 100m and 200m silver medallist Marie-Josée Ta Lou.

Yesterday was one of the best experiences of my life. Finishing 3rd and running a PB behind an Olympic Champion in a stacked field was amazing. Loved being back in the London Olympic Stadium and the atmosphere was incredible. Thank you to everyone for the lovely messages 💕 pic.twitter.com/XGikQGGQCD

But Dobbin says that time also came as something of a surprise, given that her winter hadn’t exactly gone to plan and she opened her summer season later than she would have liked.

“I had a bit of a weird preparation into the season,” she explains. “I had a couple of niggles and it was kind of my first experience of this so it was quite tough to deal with.

“My first couple of races, it took me a while to find my rhythm, but by Anniversary Games I felt a lot more like myself. I was rewarded with a PB and I wasn’t expecting that with how the preparation had gone.”

Dobbin is not one to make a fuss, but one of the injury issues experienced was actually a chipped bone in her neck.

“I was having a bit of pain at the back of my knee and no one really knew what it was, so I wasn’t really doing too much running but I could do everything in the gym,” she explains. “I went in the gym one day, was doing an exercise called push press, and a 60kg bar fell on my neck. I ended up in a neck brace, on one of those boards they put you on so you can’t move and do yourself any more damage, and in hospital.

“So I did have a real rough time of it throughout the winter.”

“I went in the gym one day, was doing an exercise called push press, and a 60kg bar fell on my neck”

That put paid to the ambition of going to the European Indoor Championships on home soil as part of the 4x400m squad and that knee niggle also later caused Dobbin to withdraw from the relay at the European Team Championships in Bydgoszcz as a precaution.

“When I ran a PB in London I was really taken aback because I had told myself, because I’d had an injury, that this year might not have been as good as last year,” she admits. “But I think from having such a successful year the year before, and years of training under my belt, missing a couple of months wasn’t the end of the world. After speaking to loads of other athletes, I realised that a lot of athletes go through that and I was worrying for no reason really.”

It was in the June of last year that Dobbin stormed into the sprinting spotlight by breaking Sandra Whittaker’s 34-year-old Scottish 200m record with a time of 22.84 at a UK Women’s League premier division match in Eton.

The Edinburgh AC athlete went on to improve that mark a further three times over the summer, down to 22.59 when winning her British title, and all the while she was also juggling four jobs.

She’s now part of British Athletics’ World Class Programme, so receives funding and support from the national governing body, but still does some shifts as a receptionist at Loughborough University.

“When you’re used to being so busy it is very weird to come home from training and think ‘what am I supposed to do now?’! It’s a great position to be in – I’m definitely not complaining! But I feel like I had to still do something.”

“I still see myself as a 23-mid runner, I’ve not accepted actually the fact that I am running times that my idols are running”

Changes also included a shake-up of her training regime, with recovery playing an important part.

“This year I’ve definitely learned that I’m not the same athlete any more,” says the sprinter, who has been coached by 2010 Commonwealth 200m champion Leon Baptiste since 2012.

“We always did a lot of training and I really pushed myself but this year we’ve had to be a bit more careful because I’m running a lot faster, so there’s more chance of injury.

“I’ve also learned not to stress out if I miss a session. Between 2015 and 2018 I think I missed one session because I had a tight hip and that’s it. So then this year, to miss a couple of months throughout the winter, it has been a learning curve for me and taught me that you can miss sessions if you’re not feeling quite right and still then go on and have a good year. I’ve definitely done a lot of learning this year.”

With the world championships not taking place until late in the season, between September 27 and August 6, Dobbin also benefits from the experience of Baptiste, who claimed his Commonwealth title in the October of 2010.

“I remember thinking of that when we had our pre-season meeting,” she says. “I knew he would do it well and be able to get me in the best shape to have a long season.

“Maybe even me picking up an injury has been a blessing in disguise because we are so fresh now. I feel like I’m itching to race.”

So how will it feel to be back on the Alexander Stadium track this weekend?

“I think it will feel quite emotional,” she says. “It will definitely feel special. I think it will give me that boost and a bit of a buzz that if I could come here last year and do it after everything that was going on with working so much, so there’s no reason why I can’t go this year and do the same.

“The women’s 200m at trials is very competitive so I have to be on my A game.

“Ultimately it is about qualifying for Worlds and finishing in that top two but it would be really nice to defend my title and that would mean a lot to me.

“Because I’m so new to the racing on TV kind of thing, I get a big buzz from that,” she adds. “When the camera comes to my face I get so much adrenaline. My mum has got the whole of my home town watching so it puts a lot of pressure on me but in a good way and I think that’s why my performances improve at races like that.”