Athletes of the year 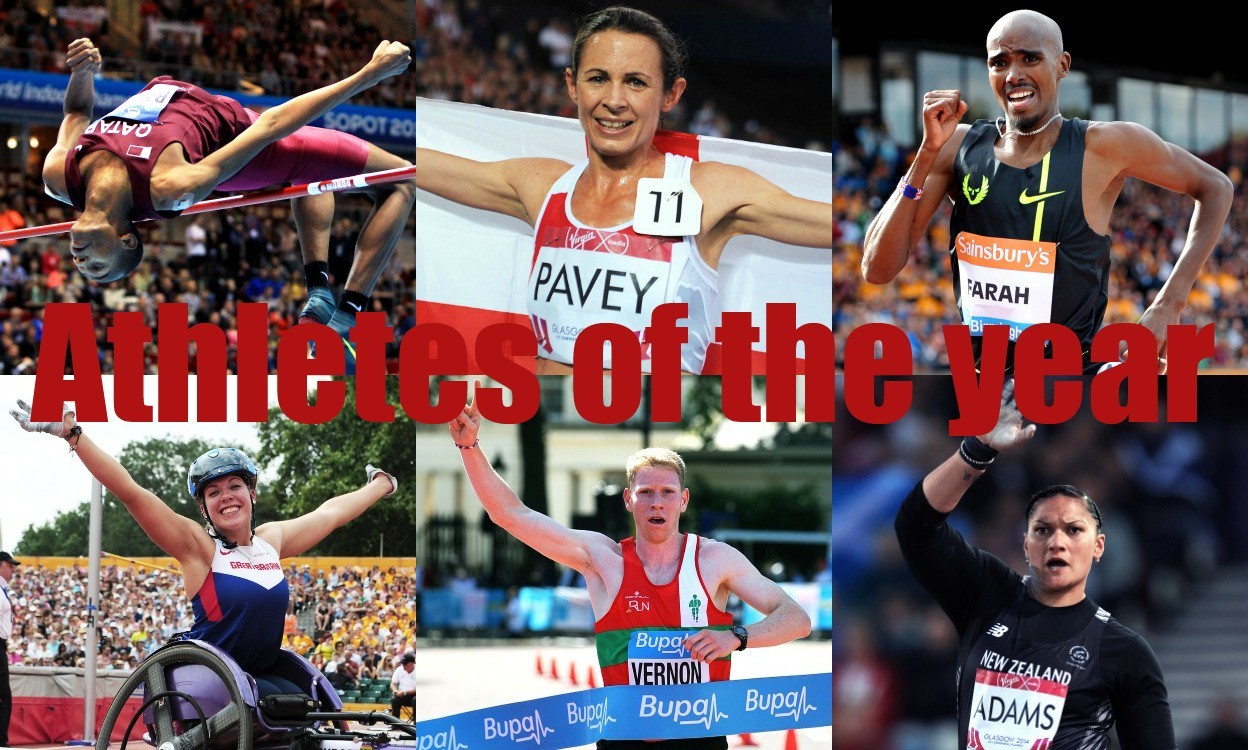 It’s awards time again and we want you to tell us who or what has most impressed you in the world of athletics in 2014.

There’s a total of 10 categories to vote in as part of this year’s Athletics Weekly Readers’ Choice Awards and while these accolades are just a bit of fun and there is no real hardware up for grabs it does give you the chance to shout about who you believe to have been the stand-out stars.

Below you’ll find the names of athletes included in each category, together with their achievements in 2014 to help you make your decisions.

Online voting ends at midnight on November 28, 2014, with the results due to be revealed in the December 4, 2014, edition of AW magazine.

Nijel Amos
Beat world record-holder David Rudisha in a thrilling Commonwealth Games 800m and went on to win 800m gold at the African Championships. The Botswana runner also claimed the IAAF 800m Diamond Race and tops the summer rankings with his 1:42.45 from Monaco.

Mutaz Essa Barshim
Contributed to an incredible year of high jump battles, the Qatari athlete’s 2.43m to win in Brussels an Asian record and a mark that only world record holder Javier Sotomayor has bettered. Won world indoor gold in Sopot as well as Asian indoor and outdoor titles and claimed overall victory in the Diamond League.

Bohdan Bondarenko
The Ukrainian also provided some top-class performances in what has been a golden year for the high jump. Won gold at the European Championships and the Continental Cup and set a 2.42m European record in New York.

Yohann Diniz
Clocked 3:32:33 to take 1min 41secs off the 50km race walk in Zurich, the Frenchman breaking the first world record at the European Championships since 1990 and taking his third title.

Justin Gatlin
Ran a 9.77 personal best at the Brussels Diamond League and ran six of the seven fastest times for the distance in 2014. Won the 100m Diamond Race. The American also ran the two quickest outdoor 200m times with 19.68 (a PB) and 19.71 in Monaco and Brussels respectively.

Kirani James
With 400m victory at the Commonwealth Games, the Grenadian sprinter became the first man to win the full set of world youth, world junior, world, Olympic and Commonwealth titles. His 43.74 personal best run in Lausanne was the quickest time of the summer and puts him joint fifth on the world all-time list.

Dennis Kimetto
Became the first to break 2:03 for the marathon with 2:02:57 in Berlin, the Kenyan taking 26 seconds off Wilson Kipsang’s year-old mark set on the same course. His time also beats Geoffrey Mutai’s 2:03:02 – a time that was previously the fastest in history but set on a course ineligible for record purposes.

Silas Kiplagat
Clocked a 3:27.64 1500m – the fastest time in the world since 2004 – when beating Asbel Kiprop in Monaco. Puts the Kenyan fourth on the world all-time list as he leapfrogged Kiprop. Also won the 1500m Diamond Race and ran a PB for the mile.

Caleb Ndiku
The Kenyan proved his dominance as he won 3000m gold at the World Indoors and Continental Cup as well as 5000m titles at the African Championships, Commonwealth Games and the Diamond Race.

Valerie Adams
Extended her winning streak to 56 competitions, the New Zealand thrower claiming her third world indoor and her third Commonwealth Games shot put titles on the way. Won the Diamond Race and threw a world-leading 20.59m in Brussels.

Florence Kiplagat
Set a world half-marathon record of 65:12 in Barcelona in February before going on to claim Commonwealth silver as a part of a Kenyan 10,000m clean sweep in Glasgow.

Sandra Perkovic
Won her third European discus title with a 71.08m Croatian record – a throw which was the longest in the world since 1992. She also claimed overall victory in the Diamond League series.

Dafne Schippers
Despite still concentrating on multi-events, the heptathlete did the European 100m and 200m double in Zurich, her time for the latter a Dutch record. Also won the 200m at the Continental Cup and claimed 100m bronze.

Anita Wlodarczyk
Regained her status as hammer world record-holder with 79.58m in Berlin. Bar one event, the Polish thrower was unbeaten in 2014 and that included victories at the European Championships and Continental Cup.

Ashley Bryant
Won Commonwealth silver in the decathlon in Glasgow and went third on the UK all-time list with his 8141 point PB in Gotzis. Finished as runner-up at Multistars.

James Dasaolu
Won European 100m gold after missing the beginning of the season because of an injury sustained when winning the UK indoor 60m title. Topped the 2014 world indoor 60m list with 6.47. Victorious over 100m at the Continental Cup.

Mo Farah
Claimed a European double over 5000m and 10,000m in a summer interrupted by illness, taking his European gold medal tally to five. Ran an English record 2:08:21 on his marathon debut, clocked the quickest ever half-marathon by a British athlete when winning the Great North Run and ran a European 2-mile best.

Adam Gemili
Equalled his 200m PB of 19.98 when winning European gold and lowered his 100m PB to 10.04 to go joint seventh on the UK all-time list. Formed part of GB’s gold medal-winning 4x100m relay team in Zurich and secured 100m and 4x100m silver at the Commonwealth Games.

Greg Rutherford
Leapt a world-leading UK long jump record of 8.51m in April before adding Commonwealth and European titles to his Olympic crown.

William Sharman
Clocked 13.16 at the European Championships to go third on the UK 110m hurdles all-time list before going on to claim silver in Zurich. Won a medal of the same colour at the Commonwealth Games and claimed the UK title.

Chijindu Ujah
Clocked a 9.96 100m in June to go third on the UK all-time list and become the fifth British sprinter to break 10 seconds for the distance as well as the youngest Briton to achieve the feat.

Katarina Johnson-Thompson
Set a world-leading 6682 point heptathlon personal best when winning the prestigious Hypo Meeting in June, going third on the UK all-time list. Despite still concentrating on multi-events, she broke the UK indoor high jump record with 1.96m in February which at the time was the highest any British female had ever cleared indoor or out. Went second on the UK all-time long jump list with 6.92m and won a world indoor silver in that event.

Asha Philip
Ran 7.09 when winning the UK 60m title to go second on the UK all-time list in February and clocked a 100m PB of 11.18 when finishing fourth at the Commonwealth Games. Formed part of GB’s gold medal-winning and UK record-breaking 4x100m relay team and also won Commonwealth relay bronze.

Lynsey Sharp
Won silver at both the European Championships and Commonwealth Games, clocking a Scottish record of 1:58.80 in Zurich. Beat a world-class field to win at the Birmingham Grand Prix.

Gemma Steel
Went third on the UK 10km all-time list with 31:26 run in the USA in August and matched that feat over the half-marathon distance when clocking 68:13 and finishing as runner-up at the Great North Run in September.

Laura Weightman
Won Commonwealth silver and European bronze over 1500m. Claimed the UK title and lowered her PB to 4:00.17.

Taylor Campbell
Improved his hammer PB for the 6kg implement from 67.11m in 2013 to 74.42m in 2014. That mark consolidated his second-place position on the UK under-20 all-time list, the 18-year-old having earlier leapfrogged the likes of Alex Smith and Nick Miller with his 74.05m from May.

Ben Dijkstra
Won triathlon gold at the Youth Olympics in China but has had plenty of athletics success too including English Schools victories on the track and country and PBs over 1500m and 3000m.

Joe Massimo
Broke the UK under-15 300m record with 35.21 at the English Schools’ Championships, taking almost a second off the best he possessed before the start of the competition.

David Omoregie
Set a 110m hurdles PB of 13.53 over the senior height barriers in Eugene, beating 2011 world champion Jason Richardson in the process. Won world junior bronze and broke the European junior record with 13.17 before the mark was bettered by France’s Wilhem Belocian.

Thomas Somers
Ran 20.37 at the World Junior Championships for a 200m European youth record and the second quickest ever time by a 17-year-old. Came within a tenth of the UK junior 200m record with two years left in the age group.

Dina Asher-Smith
Won world junior 100m gold and broke the UK junior records for both the 100m and 200m, her 11.14 for the shorter distance putting her top of the UK senior rankings and 22.61 for 200m putting her third.

Desiree Henry
Anchored the GB 4x100m relay team to European gold in Zurich, crossing the line in 42.25 to break the UK record before doing the same in the Swiss city two weeks later as the mark was improved to 42.21.

Jessica Judd
Ran 1:59.77 to miss the UK junior 800m record by just two hundredths of a second in Oslo with a year still to go in the age group.

Hannah Cockroft
Won European T34 gold over 100m and 800m and in May broke her own 100m world record at the IPC Athletics Grand Prix in Nottwil.

Maria Lyle
Broke the T35 100m and 200m world records and claimed European gold over both distances at just 14 years of age.

Mel Nicholls
Broke her own T34 1500m world record in May and followed that up by claiming European 800m silver and 100m bronze in Swansea.

David Weir
Won Commonwealth T54 1500m gold in Glasgow but was forced to withdraw from the IPC European Championships with tendonitis.

Laura Samuel
Broke 14 metres in the triple jump for the first time when it mattered most to win Commonwealth silver, her 14.09m putting her third on the UK all-time list.

Chijindu Ujah
Became the youngest Briton to break 10 seconds for 100m, clocking 9.96 in June to go third on the UK all-time list and become the fifth British sprinter to break the barrier.

Irie Hill
Set a W45 world pole vault record of 3.55m when winning world masters indoor gold and went on to win at the European Championships and set six world records in 2014.

Anthony Whiteman
Broke his own world M40 800m record with 1:48.05 in July, his fastest time since 2003. Could have made 800m final at British Championships but threw the race as he had other commitments with his children on the day of the final. Won multiple world indoor masters titles.

Moment of the year

» Dennis Kimetto becoming the first to break 2:03 for the marathon with 2:02:57 in Berlin, the Kenyan taking 26 seconds off Wilson Kipsang’s year-old mark set on the same course. His time also beating Geoffrey Mutai’s 2:03:02 – a time that was previously the fastest in history but set on a course ineligible for record purposes.

» Jo Pavey returning from having her second child to become the oldest female European champion with 10,000m victory to claim her first major title just 10 days after bagging Commonwealth 5000m bronze with gritty and determined performances at both.

» The GB 4x100m relay women breaking the national record twice in 11 days, first when claiming European gold and then again when returning to Zurich for the Diamond League.