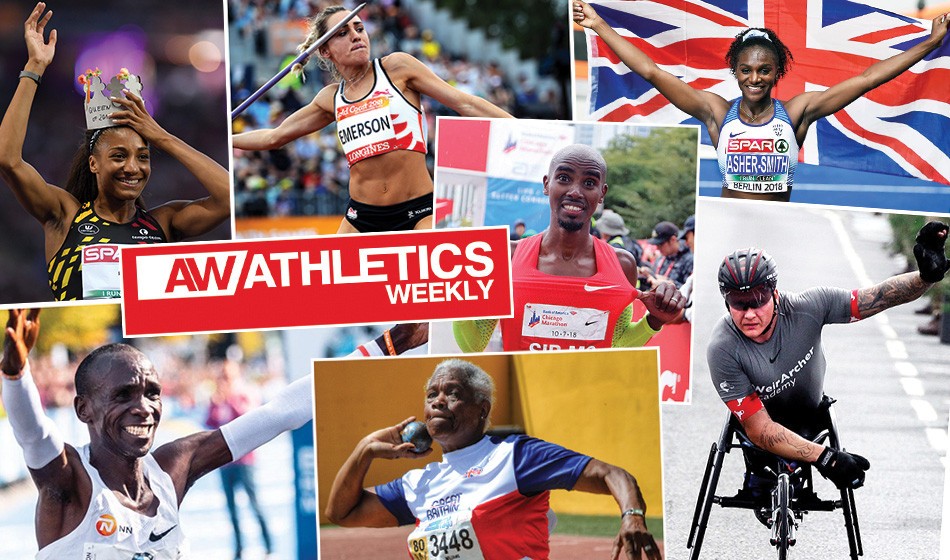 While many end-of-year honours are picked by panels of experts, for the Athletics Weekly athletes of the year awards those experts are you – our readers and fans.

There are 10 categories covering the leading British and international athletes, plus sections for under-20 and masters performers.

These accolades are ultimately just a bit of fun and there is no real hardware to be presented when the winners are decided, but what better honour could there be than knowing you have impressed the most knowledgeable athletics readership in the world?

Voting closes on December 12 with the results published in the December 20 edition of the magazine.

Armand Duplantis: Still just 18, the Swedish pole vaulter became world under-20 and European champion with a world-leading height and set eight world U20 records, indoors and out.

Eliud Kipchoge: The Kenyan smashed the world marathon record in Berlin with 2:01:39, slicing a massive 78 seconds
from the previous global mark, and also won the London Marathon.

Kevin Mayer: The French multi-eventer bounced back after his European Championships disappointment to break the world decathlon record with 9126 points and also won the world indoor heptathlon title.

Abderrahman Samba: Clocked the world’s quickest 400m hurdles time since 1992 with 46.98 and was unbeaten in nine finals, with the Qatari also winning at the Asian Games and Continental Cup.

Dina Asher-Smith: British sprinter not only won European titles at 100m, 200m and 4x100m but she tops the world rankings in those events.

Caterine Ibarguen: Unbeaten in the triple jump, the Colombian took Diamond League and IAAF Continental Cup victories in not only her specialist event but also the long jump.

Shaunae Miller-Uibo: Unbeaten all year, the Bahamian won Commonwealth and Diamond League 200m crowns and clocked the fastest 400m in the world for 12 years.

Sandra Perkovic: Croatian discus thrower took her fifth consecutive European title as she dominated her event with the top seven throws in the world this year.

Nafissatou Thiam: The Belgian heptathlete beat Katarina Johnson-Thompson to the European title with a world lead of 6816, while also ranking No.3 in the world at high jump with 2.01m.

Tim Duckworth: Won NCAA titles in both the decathlon and heptathlon, breaking the British heptathlon record with 6188 points and moving to third on the UK decathlon all-time list with 8336 points. Won the UK long jump title and finished fifth in the European decathlon.

Mo Farah: Won the Chicago Marathon in a European record of 2:05:11 and earlier in the year finished third in the London Marathon in a then UK record of 2:06:21. Also won all four of his other road races at 10km and half-marathon.

Matt Hudson-Smith: Won the European 400m title and a 4x400m silver medal. Ran a UK-leading 44.63, while also won the
British title and was third in the Diamond League.

Nick Miller: Won the Commonwealth hammer title with a UK record of 80.26m and was ranked third on the world list. Won the British title.

Andrew Pozzi: Became world indoor 60m hurdles champion after clocking 7.46 and also recorded a UK-leading time in the 110m hurdles with 13.28. Won UK titles both indoors and out.

Reece Prescod: Moved to fourth on the UK all-time list with 9.94 for the second-fastest UK time of the year, plus a windy 9.88. Also won the UK title and at the Diamond League in Shanghai as well as European silver.

Katarina Johnson-Thompson: Won world indoor pentathlon and Commonwealth heptathlon titles as well as European heptathlon silver, with her mark of 6759 points placing her second in the world rankings.

Laura Weightman: Claimed European 1500m bronze and Commonwealth 5000m bronze. Ran the second-quickest UK time of the year in the 1500m and won the British title.

Aled Davies: Gained European gold in the shot put in Berlin despite his leg brace breaking in warm-up and also won the discus title for his third successive double gold at these championships.

David Devine: The Liverpool Harriers athlete has bounced back from illness and injury to take WPA European 5000m gold this year in the T12 category as well as 1500m silver.

Simon Lawson: Close third behind England team-mate JohnBoy Smith in the T54 marathon at the Commonwealth Games in April.

Nathan Maguire: Wheelchair racer took European medals in the T54 100m, 200m, 800m and also the universal relay in Berlin, including a gold medal in the latter.

Zak Skinner: Silver in the T13 long jump at the European Championships but the Tonbridge athlete was only 5cm behind winner, Ivan Blanco of Spain.

JohnBoy Smith: Silver in the Commonwealth Games T54 marathon behind Australian Kurt Fearnley and runner-up in the Great North Run to David Weir.

Thomas Young: Only 18, the T38 sprinter from Charnwood AC is a relative newcomer to athletics but won European 100m and 200m gold in Berlin.

Sabrina Fortune: Ended the season as world No.1 in the F20 shot put with a best of 13.70m and claimed the European title.

Sam Bennett: Sprint hurdles gold in Györ in a European Under-18 Championships record of 13.19, while the Basildon athlete also won English Schools gold.

Charlie Dobson: Only five hundredths of a second behind GB team-mate Jona Efoloko in the world under-20 200m final in Tampere as he took silver. His 20.53 places him No.5 on the UK all-time junior rankings.

Jona Efoloko: Sale sprinter went No.4 on the UK all-time 200m rankings for junior men when he clocked 20.48 to win the world under-20 title in Tampere, while the time also makes him No.8 on the UK senior rankings in 2018.

Thomas Keen: Another athlete to complete a European Under-18 and English Schools double, this time at 3000m, plus minor medals in the English Schools, National and Inter-Counties on the country.

Kristal Awuah: The Herne Hill Harrier won two bronzes in the World Under-20 Championships in the 100m and the 4x100m. However, her most impressive run was a late season 11.16 in winning the Berlin ISTAF B race which put her close second in the UK all-time under-20 lists to Dina Asher-Smith’s 11.14.

Molly Caudery: Finished a fine fifth in the Commonwealth Games and cleared a British junior record of 4.53m in Mannheim, which would have sufficed for gold at the World Under-20 Championships, where she finished ninth.

Keely Hodgkinson: The Leigh athlete won European under-18 gold at 800m by over a second and ran inside 2:05 four times with a best of 2:04.26. She won the under-20 800m championships against older athletes and had top six placings in the National, English Schools, Inter-Counties, Northern and Schools International cross-countries.

Bea Wood: The Wiltshire runner won the English Schools double at cross-country and 1500m. In the latter in winning the junior girls title, she remarkably ran faster than the senior and inter winners.

Emily Williams: Won a 1500m silver in the European Under-18 Championships and also won the English Schools inter girls 1500m against a quality field.

Dominic Bradley: Won three M40 golds at the World Masters Championships with an 11.08/22.72 individual double and picked up a 4x100m title, too.

Mark Johnson: 27 years after he set his 5.26m pole vault PB, he took a share of M50 World Masters gold and also won silver in the European Masters Indoors.

Mark Symes: After a fourth in the World Masters M45 800m, he returned to win an exciting 1500m. Set lifetime bests in both events in the heats and also won a British Masters double.

John Watts: 1972 Olympic discus thrower won World Masters M75 gold despite being in his final year in the age group. He also won bronze in the weight and won silver at the European Masters Indoors discus outdoor throw.

Virginia Mitchell: The Guildford and Godalming athlete won the 400m and 800m double at the World Masters Championships and European Masters Indoors.

Caroline Powell: Continued her W60 400m dominance with a golden double at the World Masters and European Masters Indoors. She also won medals in the two events at 60m, 100m and 200m.