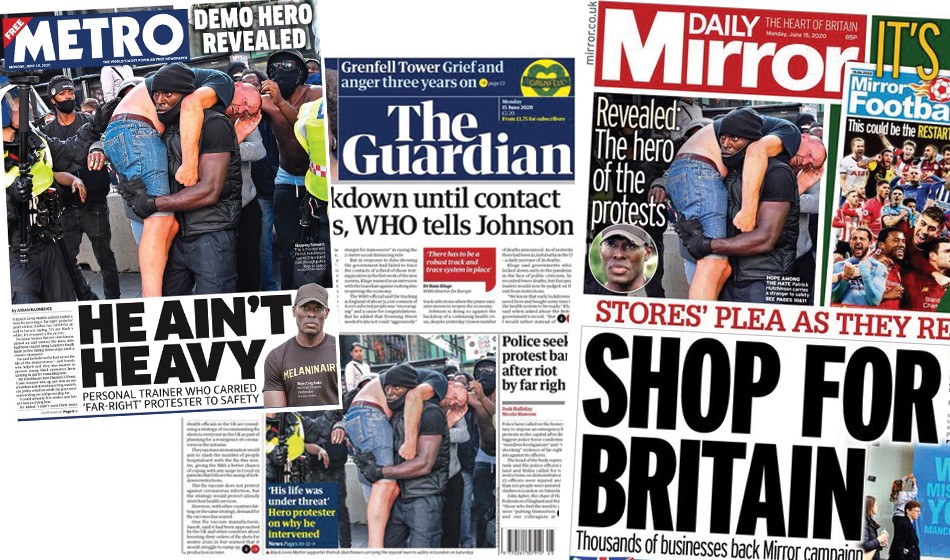 Hercules Wimbledon sprints coach Patrick Hutchinson has made the front pages of newspapers across the UK after a photograph of him carrying a man during protests in London went viral.

“Our own coach Patrick Hutchinson saved a counter-protester’s life on Saturday with the help of his security team Ark Protection,” the south west London athletics club said. “What a hero he is, and everything that Hercules Wimbledon AC stands for.”

Protests have been held across the world following the death of George Floyd last month.

World Athletics and athletes around the globe have showed solidarity with the Black Lives Matter movement, calling for change following Floyd’s death.

“It’s not black v white it everyone v the racists! We had each other’s back and protected those who needed us.”

We saved a life today @arkprotection. It’s not black v white it everyone v the racists! We had each other’s back and protected those who needed us. Shout out to the mandem @gogopierre @mrpain @chin82 @leesonstuff ——————————— #enoughisenough #blacklivesmatter #blm #justiceforgeorgefloyd #blackmamba #blackexcellence juju

England Athletics shared news of the coach’s actions on Twitter and said: “There are many reasons to be proud of volunteers in the England Athletics family – & the selfless actions of athletics coach Patrick Hutchinson, of Hercules Wimbledon AC, at the weekend are rightly being commended by people across the country.”